Changing Lives One Child at a Time

by Lisa Metheny
in Bowhunting News
0 0
A A
0

Hiding behind her Uncle I could see the tiny little girl with long golden hair. “Who hasn’t had a turn?” I asked. Her skinny little legs and bright pink Croc shoes began to fidget as I approached her. Her Uncle stepped to one side as he gently nudged her in my direction. Her bright blue eyes quickly glanced towards the ground when I asked what her name was. Unlike the other five kids in my group, I knew that this shy little girl needed a little more coaxing to draw her out of her shell. “Can I have your shoes, mine are wet from the rain and I really like your pink shoes” I said. Before she could stop herself she looked up at me, put her hands on her hip as she giggled and said “No silly, your feet are too big, my shoes wouldn’t fit you.” 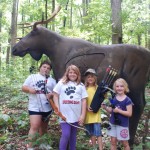 The Kicking Bear event has just begun and thanks to the help of her Uncle we coaxed her up to the line and I placed the long recurve bow in her tiny hands. I tried to show her how to hold the bow but that confused her, I knew I had just a few moments to capture her attention. “Do you know your ABC’s?” I asked. “Yes”, she huffed as she rolled her eyes, as if saying, ‘how dare you ask me that question, I am 5 years old you know.’ I asked her to make me a giant letter T with her body. Beaming with pride over the fact that she knew her ABC’s and with her arms stretched out, legs slightly apart, her pint-size frame made a perfect letter T. I quickly realized that between the pink Croc’s and the alphabet, I had opened a line of communication that she understood.

Her teammates were getting a little restless because she needed more time than others. “No worries, we have plenty of time” I told the group. My instincts told me there was more to this little girl than meets the eye. On the first target the arrow barely left the bow but with each target along the 3D course her confidence, enjoyment, attitude and eagerness greatly improved. The entire team quickly got behind her and cheered for her as if she won a Gold Medal each time she launched an arrow. For the remainder of the afternoon I never had to ask her if she wanted to shoot the bow. Instead, she often begged to go first at each target. Soon her letter T formation grew much stronger, she gripped the bow with a new found confidence and giggled uncontrollably when her arrows would bounce off a Rinehart 3D target. The bouncing wasn’t her fault; her little bow did not have enough weight to actually force the arrow in the target. But that didn’t matter to her, or to me.

The high-fives were priceless as she conquered much of the course, but the giant bear hug she gave me at the end was simply AMAZING! Her Uncle shook my hand and with tears in his eyes offered me a heartfelt thank you for helping his niece. “You see” he muttered, “Her mother and her were in a horrific accident two years ago. Their car was hit by a semi-truck. Her mother died at the scene, she was life-lifted to a hospital several hours away. She has endured much. She is tiny for her age and she is afraid of meeting new people. She likes to fish with her daddy, I thought if I brought her to a Kicking Bear event it might be something different for her to do. I didn’t know she would have so much fun and come out of her shell so much” he said as we watched her run and laugh while playing tag with the other kids. My heart was full.

The goal of Kicking Bear Foundation (KBF) is to enrich the lives of young people through outdoor experiences. The program targets underprivileged and disadvantaged youth but all young people are welcomed to attend a KBF event totally free of charge.

Created by Ray and Karen Howell, Kicking Bear is changing the lives of kids across the country, one child at a time. As a professional archer Howell is known for his achievements with the stick and string, in the archery world his accomplishments are legendary, plus he has garnered numerous titles in bodybuilding competitions through out his life and has built a successful family business. But perhaps Howell’s greatest accomplishment and certainly his legacy is that along with his devoted wife Karen they have developed one of the country’s most triumphant outdoor related mentoring programs for kids.

Howell is not just another individual whose heart strings have occasionally been tugged. He has walked the path that many of the attendees may currently be walking. In fact Howell himself is the product of a broken home and dysfunctional upbringing. However Ray will be the first to tell the kids that with hard work and faith, anything is possible. It only takes a few minutes with this generous man to realize that his heart is as big as his champion power lifting biceps. It is not just the kids that have taken notice. In 2007 Outdoor Life honored him as one of the top 25 people that changed the face of hunting and outdoor recreation. 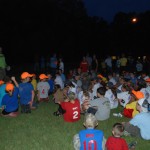 The foundation of Kicking Bear is that it offers hope and creates in the minds and hearts of today’s youth dreams for future success and provides them the recipe on how to achieve their goals. Using the outdoors and archery as mediums to provide positive life lessons the hope is that the young people who participate will also gain a greater appreciation and love for the outdoors that will last a lifetime.

Additionally, Kicking Bear develops adult mentors. Each young person that attends an event is paired with an adult mentor who, after the weekend event, will follow-up with the youth and work to establish a trusting friendship and mentoring relationship.

“What you leave behind is not what is engraved in stone monuments, but what is woven into the lives of others.” (author unknown) For Howell and the countless folks that have joined

him as a mentor or sponsors, such as Bowtech, Rinehart Target and many others, they realize that there is more to life than trophies on the shelf or animal mounts on the wall. It is what you do for others that truly counts.

To learn more about Kicking Bear Foundation and learn how you can get involved visit their Web site at :

For more from Lisa go to: Lisa Metheny