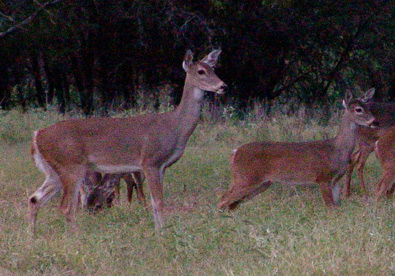 I took my last antibiotic pill before daylight this morning and decided to hunt the nearby food plot. Daylight came and I was the only mammal around until almost 8:00. A doe group of 3 came out of the gulch and entered the food plot.

It hasn’t rained since late September and the food plot shows signs of heat stress. But there are still plenty green sprigs scattered around, at least enough to be inviting for a few deer this morning. 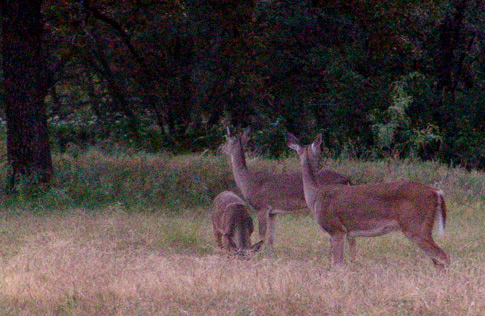 The deer turned and looked into the woods to the north. I wondered what was coming. Six more deer showed up. 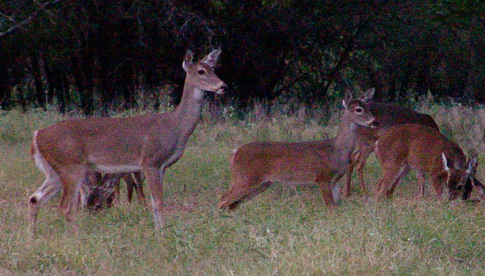 A button buck was acting aggressive this morning, it put it’s ears back and walked around the other young bucks and does. And he sent up on his hind legs and flailed at a little doe and another button head.

He must have been pretty full of himself because he squared off in front of a mature doe and put his ears back. The doe ignored him.

So the button buck rared up on its hind legs and flailed his feet and legs at the doe. But the doe ducked and sidestepped his intended blows.

Then she slammed him on top of the head with her left front fore leg and foot … a sledge hammer blow that knocked his nose in the dirt … uh, the alfalfa, and off his feet. The button jumped back up and darted away, I expect a little wiser.

I got a picture of the doe right after she clobbered the button buck. She’s giving him the evil eye. 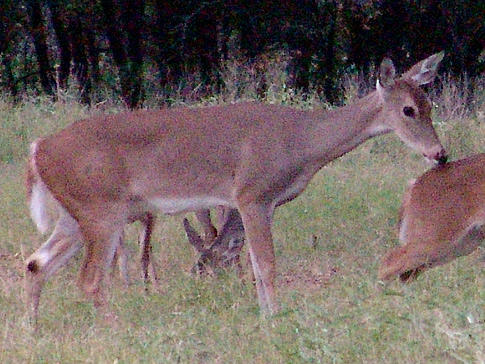 Before long the does moved on, browsing as they went. They disappeared into the woods and went out of sight to the north. 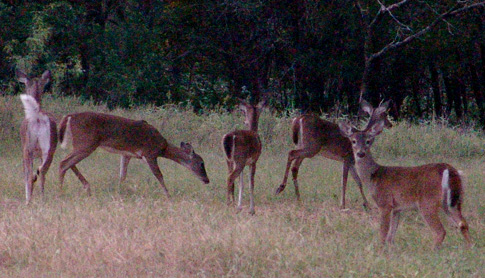 Twenty minutes later a yearling doe and a mature doe walked up from behind my blind. They walked along the high weeds and drying grass that is less than 20 yards to the left of the blind. (Notice the doe’s black hocks. It won’t be long now.) 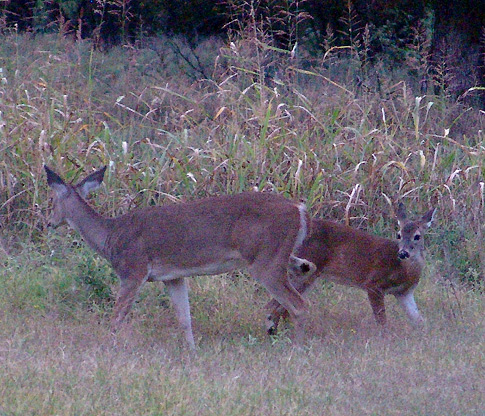 Actually there is lots of green browse at ground level in those weeds. The two deer went in it and browsed their way out of sight. They showed no interest in my food plot. 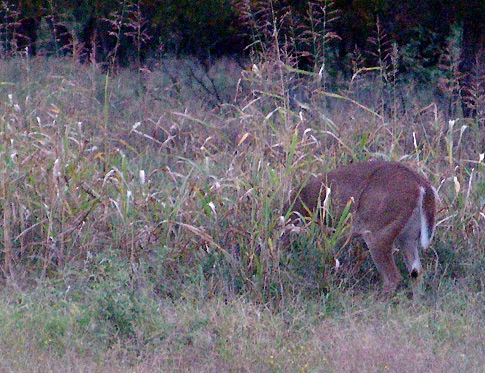 So here is where we are at October 19.

The does are grouped up and frequenting the food plot as well as the woods around it. Some does have black hocks so they are giving off stronger scent every day.

I’m not seeing any of the bucks that were dominating the food plot the first week of October. They have moved on, which is typical behavior for them, based on past experience. If there are any buddy groups that haven’t already broken up they will do it very soon. They are on the prowl, even though there is nothing to prowl for, yet.

Every night my BuckEye Cam wireless camera beams in pictures of some of the bucks we saw earlier. So most of them are still in the area. They just aren’t visiting my food plot during the day.

Now it is a waiting game. I plan to hunt some of my other stand locations and see what’s up. I wouldn’t mind harvesting a doe or two to take to Whaley deer processing for steaks, chops, sausaage and deer burger. And some wild hog pork chops would be ok too.