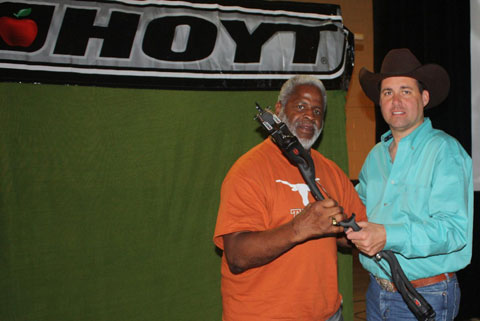 The Earl Campbell Gala was a big time and a good time was had by all. The event was an exclusive dinner held at the Cool River Café in Austin on Saturday, August 28, 2010.

Earl Campbell, aka as “The Tyler Rose” was in the house and was happy to pose for photos with those attending and also sign autographs for his many fans. Campbell was a huge football star with the University of Texas and won the Heisman Trophy while at Texas. He was also a popular NFL running back and would be inducted into the NFL Hall of Fame in 1991. Campbell now runs a successful meat business in Texas and also has a website where fans can order autographed merchandise.

My friend Butch Thompson from the King Ranch in South Texas drove up so we could visit and have lunch together. He attended the dinner that night and we enjoyed catching up and meeting some new folks. We sat at Earl’s table and after dinner I did an archery exhibition for the crowd. Dinner with Butch and Earl meant I was in the company of two Texas legends that evening.

Dennis Minks tossed targets for me and I had the net set up in the large dining room. We had a great time and I ended the show with the three baby aspirin shot. Earl had a front row seat for the game and after the show I was honored that he signed the bow for me.

A week later I presented Earl Campbell with a 2010 Hoyt Carbon Matrix bow. I am hoping he will join me on a bowhunt in South Texas later this Fall.

This was not an event where you’d normally see an archery show which was much of the appeal for me. I like taking archery in new venues and thinking out of the box. After the show I spoke to some people and signed some autographs. Special thanks to HOYT for everything, it’s great to have their support in my activities to promote the sport of archery.

SHE Apparel Teams with NWTF

The Reality of Living With Wolves