by Robert Hoague
in Alligator, Bowhunting Blog
0 0
A A
1 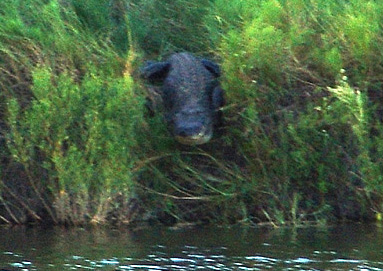 Quickly I zoomed in on the big gator in the slide and took its picture. He ready to make the slide into the water. 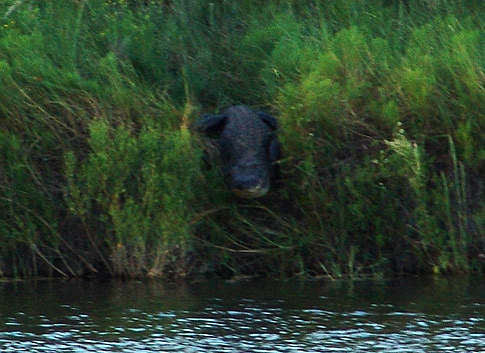 David drove away and stopped when we were out of sight. The sun was low and David told us we were going to wait until dark and go back for that big gator.

Half an hour later it was almost dark. We left the truck where it was and walked back to the gator’s pond. When we got there it was for sure dark.

We all had flashlights with us and David and Fred flashed their beams over the water. Nothing.

That was because the gator was a lot closer than we were looking.

David called. He heard a sound and shined his light. “He’s coming up, right by the edge.”

I had to hurry to get in position a few yards from the edge. It was almost to me. David shined the big gator and I drew and took my shot. The gator splashed and went under. My line flew out of the reel. I dropped the buoy in the water and it followed the string out into the pond.

The bright yellow buoy stopped near the opposite side and the gator came up.

“We need the John Boat,” David said and added, “Mike come with me. Robert, you and Fred keep the buoy and gator in sight. We’ll be back.” 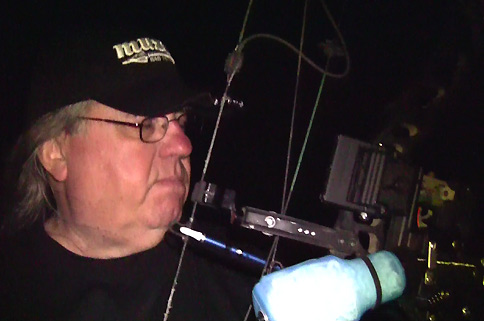 When he returned half an hour later things were about the same as when he left. We pulled the John Boat to the water’s edge and David and I got in. I took along some regular broadheads. A couple of coke cans and some other stuff was scattered around in the bottom of the boat. David used the boats trolling motor to cross to the gator. We stopped at the yellow buoy and pulled the slack out of the line. The gator was in the water 25 yards away, watching us.

The gator arrow was on the end of the line. It had come out, definitely not the hit we had thought it was.

Heads up! The boat was drifting closer to the gator. I did not have time to get the line back into the reel. Right now the line was between David and me, strewn around on the floor of the boat. I felt of the line and it seemed to be ok, no snags or anything. I grabbed the gator arrow and quickly laid out some slack line near me. David held his flashlight’s beam on the gator.

Ten yards from us the gator turned broadside, which is actually an aggressive move that alligators do to intimidate other gators with their size. And he had a lot of size to show off. He looked as long as our John Boat.

I aimed very carefully and took my 7 or 8 yard shot.

One of the coke cans landed half way between me and the gator. And some other in-the-boat stuff splashed between us. The arrow went way low and the gator went under water. When I shot the line had caught on stuff in the boat and slung it out into the water.

I pulled in the line and arrow. Oh boy, the line was tangled beyond belief. After we returned to shore it took 20 minutes to get the snarls out.

Luck was on the side of the Sliding Gator tonight.

“Lets go back to where we started today,” said David as he started the truck. And a mile later luck began shifting back my way.