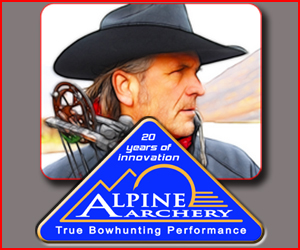 Fourth incredible day here in Newfoundland. Weather was calling for ugly hurricane force wind, 80 miles per hour and rain for afternoon so we went out early. We hiked into the timber because we figured with the weather to be in the timber. Sat down on a perfect spot in the timer. Bernie made one call and within 10 seconds there was a grunt back and then another in a different direction and then a third grunt … three bulls coming in.

We called for about 45 minutes and finally the first bull showed up a young 4×4, then second bull showed up he was a magnificent, almost 50 inches wide, 8×8 split pan long points long brows bull. The two bulls hung up together for about a half hour, the third bull kept grunting and never came in.

Then the bigger bull decided to come up to us … came right up our ridge the footage should be fantastic … stopped at 20 yards facing me dead on. I had no shot. I was kneeling down, then he walked right toward me to 10 yards, then turned broadside, and at 8 yards I took the shot. 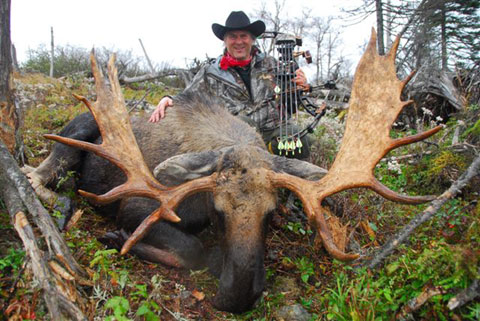 All five of my pins on my Alpine bow were in his lung area when I shot. He ran about 50 yards, stood there, then laid down and that was it. The outfitters here are Shane Mollon and Jim Cammenga of Next Ridge Outfitting. Bernie Besaw from Newfoundland was my guide and has been guiding for 43 years. He’s in the most amazing shape and the greatest moose guide I’ve ever hunted with. I’ve learned a lot from him. Can’t say enough … it’s one of those hunts you hope everyone can take.