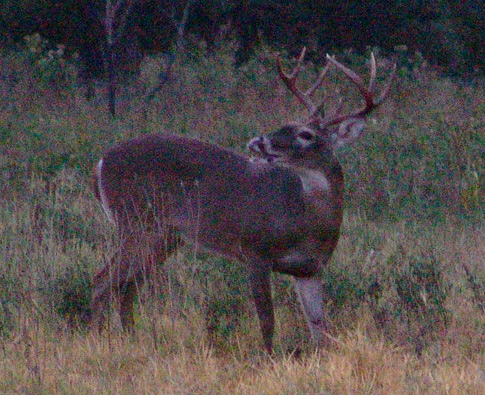 This morning was a game changer. A big deal. What happened only lasted a few seconds but the meaning of it is a big thing. And it truly opens the door to the next big thing.

Daylight was creeping in and my eyelids felt like lead as 3 does browsed around in my main food plot. Suddenly the largest doe, the only one with coal black hocks, snapped to attention and looked at something to my left that I could not see yet.

Woops, now I saw it. A buck … coming like a skud missile. Ol’ black hocks turned to run toward the gulch 80 yards away.

The 8-point buck cut her off and she hooked a 180 and raced in my direction. He caught up and they ran a couple of tight 360’s right in front of me. Then she thundered by me. He blew her off and went for the two other  does. They were surprised but quickly got it together and ran for cover.

The 8-point jammed on the brakes and stopped at the edge of the weeds 15 yards from me and waved his rack. I had already turned my camera on and, wondering if there was enough daylight to take a decent picture, pointed it at the buck. I could see it in the viewfinder … and got with it. 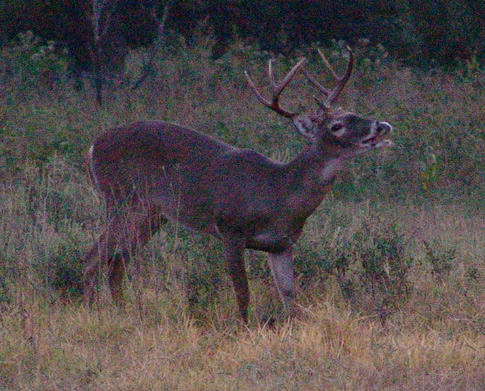 The 8’s mouth was open and his lips quivered as he made the almost donald duck hissing sound that all the deer call makers would love to have. He swung his head around and kept at it, turning his top lip up belting out the sound.

When he finished he moved his rack around a little more and stopped. 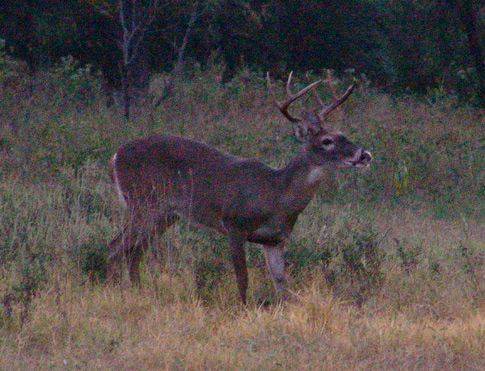 His ears went back and one second after I took this picture he returned to skud missile mode and blew on out of here. 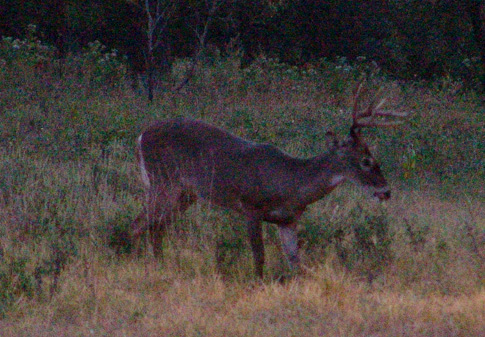 So, some of you you might be wondering, what’s pivotal about this? Well, it wasn’t a spike or a sixer running after some does while the older bucks watch. It was a solo 8-point with enough year’s on him to know what the rut is … and he was hot as hot can be.

Stage one of the rut is revving up right now. The bucks are breaking away from their buddy groups. Things are gonna get cool