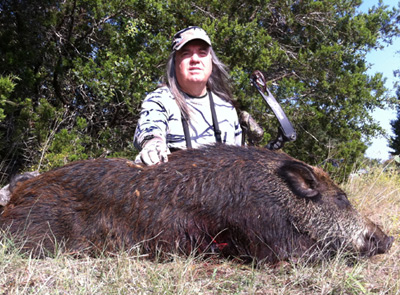 It was extremely foggy driving out to the point. When daylight came the bluing sky filled with pink clouds. A truly beautiful day in my treestand. 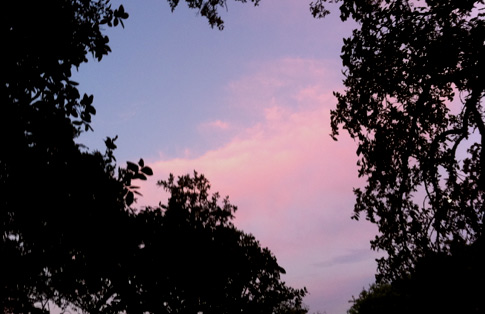 Early on I heard a gobbler waking up and announcing the new day. Soon two gobblers sounded off in harmony from the woods to the south. They were on the ground. Soon they were gobbling from 3 different directions. (Gonna start carrying turkey calls.)

The sun popped over the tree tops making long streaks of light on the ground.

A doe came in behind me and stopped under the next tree. A forky came through the woods in front of me and stopped at the fence 12 yards away. They stared at each other.

The doe took steps toward him and he charged and they took off. I watched them zig zag in and out of my view in the woods to my left. Robbie Cramer texted me that he had shot a doe and watched it drop.

Faint grunts from the thick woods behind me meant only one thing, wild hogs. About 10 of them walked up and spread out in my little piece of woods, they were after the acorns.

A black one and a brownish one were the largest. When the black one bowed up on one of the other hogs and gave him an attitude adjustment with a mouth full of tusks … I drew my bow.

As I moved my bright green top pin toward the vitals of the black hog I noticed the brownish hog was in the clear too, and broadside. I put the green dot behind the left front leg and let the wild boar meet up with a Victory V-Force arrow. Blood flushed from the wound and all the hogs ran to my left and turned on a trail leading to the south. The brownish hog was visibly pumping blood and lagging behind. I looked at my watch, it was 8:51am.

I decided I would wait until 9:15 to recover the hog. But at that time a was spike eating acorns a few yards away. When he left I wanted to wait another 10 minutes before getting down to let the spike clear the area. But I heard the turkeys come through and waited longer. But they missed me and came through 50 or 60 yards to my right.

When I got down I went to the trail the hogs had used. There was no blood in it but as much blood as I saw coming from the hog the lack of blood in the trail meant he didn’t use the trail. But he did go the same way so I walked down the trail, looking ahead and left to right. In 40 yards I saw my wild boar. He was too heavy to drag by myself so I went to get Robbie Cramer and his doe. We took pictures of Robbie with his doe first and my hod second. 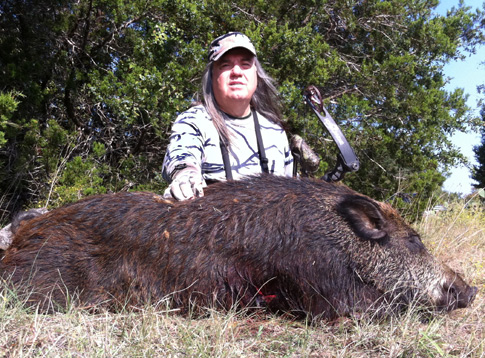 I shot the wild boar with my BowTech 82nd Airborne and a Victory V-Force carbon arrow tipped with a Grim Reaper Whitetail broadhead with a 2-Inch cut. The broadhead smacked a huge entrance and exit hole in the boar. It only went 40 yards.

AFTERNOON – Hunted the Hammer Hole this afternoon. No deer. Very peaceful afternoon. I feel like a million bucks.