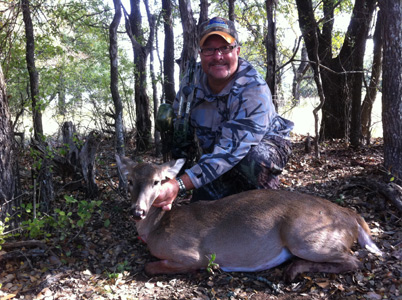 After daylight a group of does came into the area where Robbie Cramer has a tripod stand. The does acted very nervous. They passed by Robbie and went to some acorn trees where deer always go and milled around around eating acorns. An hour later 3 does came into the trees where Robbie has his tripod. Two of the deer passed through but one stopped 15 yards from Robbie and watched the other two deer walk away.

The doe was standding quartering away and Robbie was able to draw his bow and take the shot. The doe ran but stopped in a group of trees 40 yards away. It laid down and its head hit the grouund.

Robbie immediately got down. His arrow had good blood on int. He knocked an arrow and went to where the deer was. As Robbie had thought the doe had expired.

Robbie walked to his vehicle, got his phone and texted me that he had shot a doe and added that he watched it drop.

Here is Robbie Cramer with his first 2010 deer, a mature doe. He harvested it with a Bear MQ3 and Grim Reaper Razortip broadhead. We took pictures of Robbie’s doe and my wild boar and drove into Hamilton to Whalay Deer Processing. We ate mexican food at Ortega’s and returned to camp to get ready for the afternoon hunt. 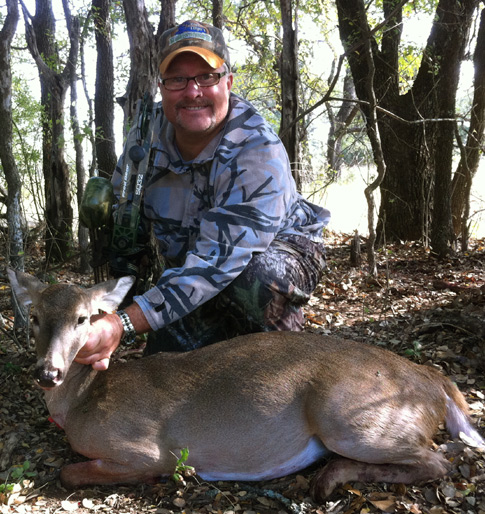