by Dave Richey
in Bowhunting Posts
0 0
A A
0 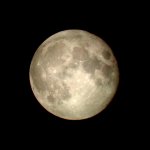 The moon was big and bright the other night, and what few deer moved, did so right at the end of what would have been the end of legal shooting time if the archery season had been open.

It wasn’t open but It raises the eternal question. Is hunting during the full moon a waste of a hunter’s time? No deer hunting method, in my humble opinion, is a waste of time. But I’m not like a lot of people who look for any excuse to not go hunting.

My experience during full moon periods may be much like yours. The deer often move late, and not many deer move during legal shooting time, but I’ve seen exactly the opposite on several occasions during my hunting career.

There have been several full-moon periods when, for whatever may be reason, the deer moved well. They were up and moving well an hour before sunset.

There haven’t been an overabundance of good deer hunting days during the full moon period, mind you, but there have been some spectacular nights that I well remember. I take a different approach to hunting this period than many other people do. 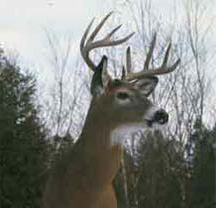 I love deer hunting. Shooting a deer every time a person hunted would soon rob this pastime of its enjoyment. For me, being afield with a bow in hand is more important that the time of year or the moon phase.

It’s very obvious that it’s impossible to hunt from inside your home. We have to be out in the field, and each morning and/or evening hunt, is very important. I don’t pay much attention to the moon phases ‹ I just go hunting, day after day.

The rut is still about five or six weeks off, and I’ll hunt every chance I get during that period but trying to pin down the peak of the rut to a specific day or days is much too scientific for my tastes. I figure if I hunt every day, regardless of the moon phase or rut phase, I’ll have my opportunities. It’s up to me to cash in on them.

The one thing I do know is that during the rut the bucks seem to move more often during that period from 10 a.m. to 2 p.m., and hunters who can be afield then often find bucks up and moving around. I’ve seen days during the full moon when bucks move fairly well during the middle part of the day. The solution to this problem is to be out on those days when bucks move at mid-day, but how do we know when it will happen.

The answer is we don’t. So we hunt as often as possible.

Hunting deer is a major part of my life. So why should I concern myself with counting days after the second full moon during the fall, or picking an arbitrary day to pinpoint when the rut starts.

Be as versatile as possible and hunt different times of day. It can pay off.

Hunters who are in the woods will know when the rut starts. Those same hunters who are afield at various times from sun-up to sundown during the full moon will also see bucks. It’s persistence, patience and practice that puts bucks at risk around me.

I have no hard-core advice for hunting the early season. Forget about the moon phase, and go hunting. The early season offers about two weeks after the opener when the deer move well, and that is followed by two weeks when they don’t move well.

Know when bachelor groups break up and learn that bucks are always near does.

They have suddenly wised up, and the bachelor groups of bucks that have been traveling together, soon will not be tolerating their buddies. The baddest buck in the area will start asserting himself, and this prepares both buck and doe for the early chasing phase of the rut. Trust me, the two weeks before rut actually kicks is the best time to hunt the rut. The bucks are checking scrapes, regardless of moon position, and it’s up to each of us to be in the right spot when they make their rounds.

Forget all the old wives tales about the buck rut, and spend as much hunting outdoors as possible. Pay attention to the interaction of bucks and does, and when bucks start sniffing and chasing does, the rut will be kicking off Š regardless of the moon phases.

Years ago, I learned some great lessons about bucks and does during the moon phases and the rut. At one time, it was legal to hunt until one hour after sundown. More bucks were visible in the moonlight of a full moon, particularly if snow covered the ground, and I was able to watch to see how this worked. The whole secret, if there is one, during all moon phases and the rut, is to locate the does. The bucks will never be too far away.

It may not be the easiest hunting but cold weather, storms and a drop in barometric pressure and air temperature can and will make deer move. The more time we spend hunting normally means the more successful we will be. It certainly works that way for me, and by following these tips, you can help make your own luck.