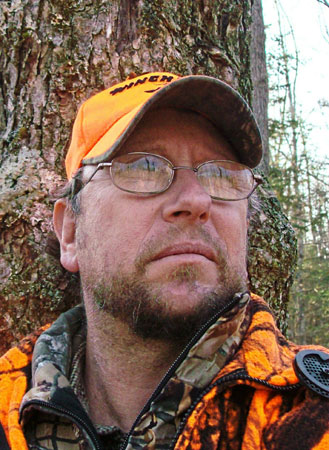 Having scouted hard for weeks prior to this particular hunt, I plopped myself down into my little camp chair beside this awesome, towering oak, confidently knowing that all my hard work was going to pay off, if not today, tomorrow. This was the spot that had the best and freshest sign and I was way back in a beautiful little swamp, at least a mile from nowhere. Normally too impatient to sit for more than two hours I had even made the decision to go in early and make myself stay. After all, it was Thanksgiving weekend, the rut was on, and the bucks would most likely be cruising early so I was at the tree by 1:00pm, my resolve in place and mentally ready to make my stand. Whether a deer would appear early or not, I knew from experience that the hour just before dark would be my best shot at seeing a bruiser in this swamp.

As the afternoon rolled on, the hours seemed to blend together evenly for a change, and I knew the conditions were right. The sky was completely overcast with that threat of gloom that can only come from a late Fall day in the deer woods and nothing was stirring, not a breath of air moving; The swamp was filled with a silence that echoed the kind of stillness that makes a hunter’s heart race in anticipation of the that one twig that might snap, signifying the approach of a deer. The temperature had dropped as the afternoon wore on, having started out around 42 degrees when I got there and I now surmised it to be hovering somewhere around the 35 mark. Shrugging off the occasional chill and shiver that tried to creep in, I noticed it had gotten darker and in checking my watch I realized that “primetime” was now upon me as that magical hour of 4:00 o’clock arrived.

I was startled at the sound of not one but several distant crunches of heavy footsteps about 75 yards into the swamp to my right. Getting myself ready, staring and squinting past the brush and swale grass I fully expected to see a big-racked buck coming through the dark woods. Instead I saw blaze orange. With a sinking feeling in the pit of my stomach a hunter in all his radiant glory appeared 75 yards from me, stillhunting his way through the swamp, oblivious to my presence. He wasted no time in moving through and he wasn’t especially quiet about it either, and not once did he look in my direction. In a mere couple of minutes he was gone, leaving me with only the sounds of his distant footsteps as he must have been stepping on every twig in front of him!

Glancing both around me and at my watch, I could see there was only about 15 minutes of legal shooting time left but since he had walked through the entire area I expected to see deer using, my frustration got the better of me. I packed my things and left in a huff, completely amazed at the fact someone had yet again destroyed what I thought was a well-planned hunt.

The area in which I live, (midcoast Maine, about 12 miles in from the ocean), holds the densest population of deer in the state. Unfortunately, it also holds the largest number of hunters according to density, as well. This region, lush habitat for deer and other game, is primarily agricultural, being made up mostly of large parcels of open farm land, interspersed with private homes. Our biggest problems here are that so many properties, farms included, are relatively small, diversely owned, sit bumper to bumper apart and every landowner has a different view and approach to hunting. Some allow it without restriction, some by permission only, some are reserved only for the landowner and his friends, while others simply post their land as “NO HUNTING”…period. What that means to the hunters that live here is that you have to knock on many doors and be willing to receive much abuse in an effort to secure a tract that you can hunt, and more often than not those you do find, you will no doubt be sharing with more than one or two others. Public lands? Sure, we have them, but plan on being over-run with more hunters than you can shake a stick at! The aforementioned scenario of me in that swamp happened about 12 years ago and since then I have developed a strategy that, far from being foolproof, seemed to improve my odds a great deal. Today, though my goals are fairly simple when hunting locally, my planning sessions are not. Here’s what I have adapted myself to in these areas of high hunting pressure…

Scout Hard and Set Up Differently
Get to know your areas well; get permission on farms and properties you really want to hunt and make a detailed plan. I first drive around the area if possible to get a feel for it. Next thing I do is go online and find an aerial photo of the area, such as is found on Google-Earth, and I go over the maps with a fine-tooth comb. Aerial photos can show much about the property, such as hardwoods vs. evergreen stands, hidden fields, and bottlenecks and funnels. I’ll print out the pics and take them into the field with me, oriented ‘north’, and now having a birds-eye view, I commence to working the shoe leather hard, in order to get a real handle on things from the ground. By assessing all these factors together and walking the property, I next look for active sign, dependent upon the current food sources they are utilizing both at the time of scouting and what the next most likely resource will be. If I can find active trails and confirm they are doe groups, I’ll start pinpointing areas I believe other hunters might consider setting up in, based on access roads, foot trails, tote roads, etc., as oftentimes I find the majority of hunters will hunt closer to roads and trails and are less likely to explore those regions that are much harder to reach and are “off the beaten path”.

If I can come up with an area that seems to be holding deer, (primarily the does), and can make an educated guess as to where hunters would most likely set up under normal hunting conditions, the next phase of the plan would be to back off from these “best spots”, and scrutinize even closer the areas where a buck or bucks might come from to reach these spots. If likely bedding areas can be found on both aerial maps and the ground, it’s my goal to get in as tight as I can, and try to cross paths with a deer before another hunter sees it. And if I’ve properly noted the areas I believe other hunters might be traveling, it also helps if I can place my own stands in a line that will have deer virtually being ‘bumped’ to me by the very hunters I’m trying to avoid.

Hunt Like You Mean it
When I’ve found a spot that meets all my criteria, I set up, be it ground blind or tree stand, and in doing so I bear in mind the angles of both rising and setting sun, as well as wind directions, though wind isn’t as crucial in these rural and suburban settings as it might be in the midwest, due to the human factor already being a fairly dominate scent in these parts. I just spray down and use common sense. Still, because no plan or area is foolproof, I always make sure I have a “Plan B” set up just in case the “Plan A” gets blown.

Again, in my area, many hunters hit their stands before sun-up and again in late afternoon but most don’t have the capacity to sit past 9:30am and often they head out after 2:30pm, except when the rut really kicks in, but for me, learning to stay on stand later has resulted in more meat being put in the freezer. And speaking of the rut, it’s vital in my book to get a handle on when it kicks into high gear here. Yes, it will hit the same time each November, and yes I understand “rut suppressants” such as warm weather, lot of rain, and varied hunting pressures can make a difference but still, I look deeper. I pay attention to weather in the form of incoming fronts, drops in barometric pressure, whether or not a full moon might have deer feeding later, and so on, but another good indicator is checking in with local butchers and meat processors, as they can easily tell you when that ‘surge’ of activity hits it’s peak. If you scout harder, set up a little differently than the other guy, and pay attention to details and perhaps keep an annual journal, you’ll tag more deer in areas where the pressure is high.