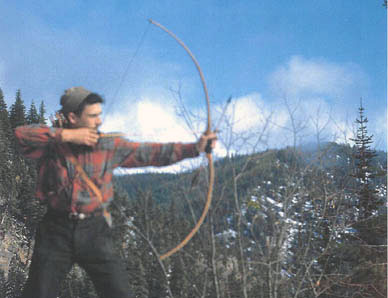 We didn’t just shoot bows. We lived archery. Every day the sun shined, which was almost every day where I grew up, my brother and I crossed the street into the vacant desert, especially enjoying a huge parcel that at one time was razed to bare earth. And we fired arrows. A lot of arrows. Do something every day and you will either get either pretty good at it, or realize you never will be good, so you quit and take up another pastime. We got pretty good. A cardboard box at a hundred paces was soon tattered with 11/32″ holes. Never did we approach the sphere occupied by the greats, such as Howard Hill. But in time we found that, for us, procuring edibles with the string-gun was as certain as night following day.

Our mother would have taken a stick to our behinds if we sat slack-jawed and glassy-eyed in, front of the boob tube riveted on some inane program. But early television was as boring as watching wind erosion, often little more than adults sitting around a wooden table discussing events of no interest to young people and probably very little importance to anyone but themselves. In the evening, if you were half brain dead, you could catch the George Gobel show. George, to our level of appreciation as young people, was as funny as a hernia. And so we read, sometimes classics, such as Treasure Island or Robinson Crusoe. But more often hunting stories, our thoughts never very far from tomorrow when feathered shafts once again hissed through the air like angry vipers.

Having lost track of my best buddy from grade school days, I was surprised when Ted walked up to me one day and said, “We’ve moved back.” His first love was archery. He had a few self-bows, probably hickory-too long ago to recall-and one all-fiberglass non-working limb “recurve” that stacked like bales of hay and recoiled in hand with sincere vibration. Ted loved that bow in spite of its bad “manners.” My best bow was a green glass laminated Ben Pearson longbow drawing 75 pounds. We immediately took up where we left off, shooting bows every day. A passion for exploration blended into what we called “survival hunts.” Our chances of starving to death on these forays were about the same as a fox dying of hunger in a chicken coup. We did have a few lean times. But before hunger pangs set in, singing arrows provided tasty protein.

We built our own hideously uncomfortable pack frames, loaded a few condiments and cooking utensils, and fled into yonder hills. I lost track of the longest time spent on one of these ventures when, perhaps, we should have been learning how to be bankers or dentists instead of “wasting” our time tramping the outback. One evening around a campfire I reminded Ted of our “month-long survival hunt in Mexico.” “Sam,” he said, “you forgot. We were gone two months. That’s how I lost my job at the mine.” He was right. We did spend two full months in Sonora with bows only. The hunting license was $19.20 and we didn’t have to buy the $20.00 gun permit because we didn’t have any guns. We made friends with Sonoran ranchers who were more than happy to take the extra venison off our hands.

Then it happened. A professor came up with a bow design that had mechanical advantage and the first compound was born. Being a son of academe, he never patented his idea. But a business-minded fellow came along who did, and the wheelbow soon went commercial. The only real advantage of early compound bows was let-off, or relaxation-pull 60 pounds, hold back 40 or so. The Wilson brothers’ Black Widow recurve at the time shot a faster arrow. But by and by, let-off was combined with true mechanical advantage in storing and promoting arrow speed beyond longbow or recurve. I got into the compound game and enjoyed the novelty of the new bow. Ted never went for it.

I’m not sure why, but the compound bow charm wore off. I gave away the best one I had, a Jennings Arrowstar, to a cousin who fell in love with it. And I quit bow shooting for a spell. An old longbow suffered solitary confinement for awhile, but one day I dragged it out of the closet, procured a straw bale, and began shooting again just about every day. That was the first step for me on the comeback trail to archery traditional style. The next step happened on a long trip. I don’t recall where we were going, but we stopped at one of the Little America complexes that our young daughter delighted in, calling them Penguin Palaces. And at the magazine rack I saw it.

The first edition of Traditional Archery Magazine lay before me. I bought it. I read it cover to cover. And soon had John Schulz make me a reverse handle longbow that far surpassed any of my previous sticks for smooth-draw fast-arrow performance. That bow led to others. At last, a dream from high school days became reality and I finally had a Black Widow bow, too costly for a kid working at A.J. Bayless food market when the Wilson brothers were building the Widow, but affordable now. Other bows followed. Herb Meland, who had been crafting fine bows for years, completed a shop and began producing traditional bows full-time. My first-was a one-piece longbow. I added Pronghorn Ferret recurves later. Then I did a full circle with Herb’s finest creation—the Pronghorn Three-Piece longbow.

Lest anyone get the wrong idea, just because I returned to sticks does not suggest in any way a disdain for compound bows. But for me, personally, something was missing as the compound became more and more sophisticated. In short, I wasn’t having the fun I used to have with simpler bows. I recently conducted a non- scientific grassroots survey of traditional archers and their reasons for taking up simpler tackle. Reasons varied from a desire to up the challenge to becoming disenchanted with the mechanical bow. In away, as the compound got better and better, it also got further and further from what archery used to be.

The day the first game department came up with a special archery season was the day that compounds carved a deep channel in archery that is unlikely to fill in during this century. These seasons were special, often in places where guns could not go for reason of human population or farm and ranch locations that were not suitable for the thunder stick. As hunters would do later with special blackpowder seasons, archers quickly latched on to taking advantage of these special seasons. An early pitch with strong advertisement in magazines shouted, “Be a Two Season Hunter!” Go with bow and gun and you might end up taking an “extra” deer.

The idea of creeping through the tangle with longbow or recurve in hand gave way to making the hunt easier with a bow that shot a faster arrow with let-off, often having to hold back only 50% or so of the bow’s actual draw weight. Plus there were sights to aim with. So of course the compound ruled the day as it still does. Less practice is required to put an arrow on target with a bow that has let-off, a flatter-shooting dart, sights, and of course a trigger or release, which was available at least as early as the 1930s, but came of age in recent times.

In spite of the advantages, however, as this is written longbows and recuves have returned with such impact that there are few hundred professional bowyers producing these bows in one-man shops, while the big companies have returned seriously to offering traditional bows, such as the Bear Kodiak.

Of course, these older style bows were capable of “bringing home the bacon.” Customs, semi-customs, and factory-made traditional bows did the job. Had they not, they would have fallen into the ditch of obsolesce overnight. Hunters put a lot of time and effort into their sport and they demand results. My friend Tracy Villwok, who hunts only with longbow, just came in with a magnificent free-ranging bison taken in our home state of Wyoming. He had to locate the bull, stalk it, and bring it home with nothing but his longbow. And he did it.

Two of his friends were equally successful with traditional bows of modern design and materials. Same season, Tracy got a fine antelope buck with his longbow and an exceptional mule deer buck. As this is written, he is hunting bighorn sheep above timberline in western Wyoming carrying only his Pronghorn longbow.

The better longbows and recurves fire hunting weight arrows at about 200 feet per second, not as exciting as the compound bow’s sizzling speed, but sufficient to fly completely through the vitals of a bull elk. After all, Howard Hill killed an elephant with his longbow, and it’s my bet that the super heavy arrow Hill used did not depart the bow at much over 160 to maybe 170 feet per second. So what is the lure of the traditional bow? Tradition, of course, as the name implies. But as one convert put it, “By the time my compound bow was all set up, it carried no easier than my .30-06. My new longbow doesn’t even weigh two pounds.” He flipped open his wallet to show a photo of his little bow and a great big bull elk that bow had taken with one arrow.

Whenever I told her that I was not too fond of an assignment that she had saddled me with at the University of Alaska, Professor Minnie Wells would say, “Sam, it’s just not your cup of tea.” And that is how it’s going to run with the compound/traditional bow choice. One or the other may not be your cup of tea. But the stick apparently has just the right flavor for a great many archers in this 21st century. And it looks like it’s going to be around for a very long time to come. It takes a little savvy to get into the game “right,” such as choosing a bow that becomes a friend instead of a foe, and learning how to manage that bow in what’s called “instinctive shooting” without sights. And it takes practice to make shooting the longbow or recurve almost as natural as breathing, sending arrows to the mark with no sights at all, the computer called the brain mastering hand-eye coordination.

Finally, it’s often a surprise to compound archers when we stickbow shooters claim that our bows actually have a few advantages over wheels, pulleys, cables, releases, and bowsights. The practiced compound bow shooter will cluster arrows closer at longer distances than longbow/recurve fans. But when Stacy Groscup turned aspirins into little white dust clouds in the air, he did it with a longbow. The great Byron Ferguson snuffs a candle flame–with the tip of his arrow, not the feathers flying by-and he does it with a longbow. I have watched Vern Butler skewer cow pies at 75 yards consistently and Bob Taylor stop shooting at a close- range target because his next dart would probably Robin Hood an expensive arrow. Vern and Bob both shoot longbows. In black timber and whitetail thicket, stickbow hunters find no disadvantage linked to their tackle. But mostly, we shoot traditional bows because they suit our sense of archery. And that’s about it.