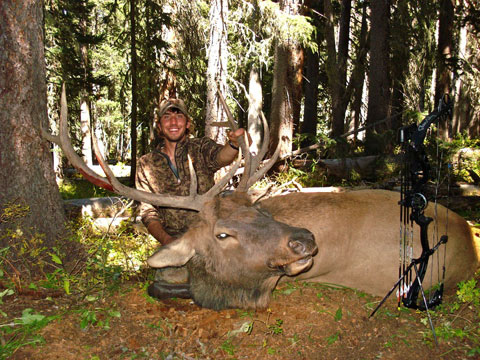 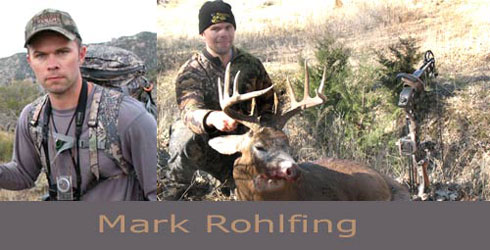 We pointed the truck southwest; New Mexico was the destination. Dustin Arndt, Jarod Burleson, and I were heading out for a 2-week hunting adventure. Dustin and I had tags and Jarod was coming to help us get within bow range of a bull elk.

We packed in with horses on September 12 to a drop camp. That night we heard bugles ringing across the ridges above us, keeping us from sleep. The next day we were in some great action. At about 1:20 pm the first day I snuck to the edge of a tiny meadow and could see cows. I pulled the Leupold rangefinder from my S4 Gear Sidewinder holder and clicked on a cow. 45 yards. A nearby bull ripped a bugle. I clipped on my release knowing it wouldn’t be long before he checked the cows that were calmly feeding in front of us. A few minutes later the 6×6 bull emerged. Seeing a glimpse of my drawing motion he stopped broadside. I settled my 40-yard pin on the top of his back and squeezed the shot. In slow motion the arrow arched in and looked really good. It buried to the fletching just above the mid point of the body, right behind the front shoulder. We waited a half hour, checked the video, did some celebrating and then began tracking.

A mile into the track job I was scratching my head. How did he make it this far? The shot looked good. Needless to say after much searching, the blood trail faded and we never found the bull. I’m not proud to even mention that in this story, but this is real life and you may be able to learn from my misfortune. I figured the arrow must have hit in front of the lungs or only got one lung. I’ve heard stories of hunters harvesting elk that had one collapsed lung and were still living just fine. They are tough critters and if you don’t pop both lungs, good luck tracking.

Some savvy elk hunters I know recommend getting about 8 inches back from the shoulder, especially if you’re going for a double lung hit. If you are going for the heart, go for it and don’t miss. I recommend studying detailed anatomy charts and better yet, when you harvest an animal take time as you are gutting or skinning to notice bone structure and heart-lung locations.

We licked our wounds and moved to a different canyon. I remember sweating and gasping for air as we crested the 11,500’ ridge. Remember my previous article on physical conditioning? This is where it pays off.

It was Dustin’s turn to shoot. The stars were lined-up and evidently some cows were in heat because the bulls were going nuts all day! It was the craziest rutting action I’ve ever seen. We bivy sacked into a canyon about 3 miles from our camp and for those 48 hours, honestly there was not 5-minutes in which you didn’t hear a bull bugle, day or night. It didn’t take long for Dustin to double lung a 5×5 for his first elk on the third day of our hunt.

I still had my tag and on the morning of the fourth day we got into the middle of a rut-fest with a nice ~320″ bull. He was 60 yards away chasing satellite bulls and checking cows. I passed on multiple satellites while waiting for the big bull. I did not get a clear shot at him and a bedded cow kept us from advancing on the herd bull. A short while after the herd worked off a muddy, wallowed up 5×5 bull came looking for Jarod’s cow calls. He passed through about 3 different shooting lanes at 30 yards. I was at full draw debating if I wanted to harvest this bull and end our hunt so soon. Through the last opening it felt right. I squeezed the Tru-Fire, releasing the arrow.

The fletching disappeared into the bottom 1/3 of his chest a couple inches behind the front shoulder. The Victory Armor Piercing arrow pushed the Stinger Buzzcut out the opposite side. Waiting 30 minutes we anxiously began tracking and this time there was no doubt the bull was down. It felt good to put a clean kill on him. 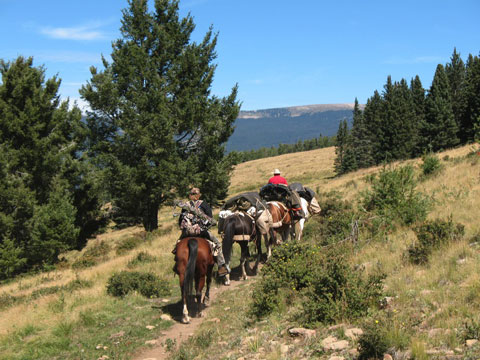 This hunt was a great start to the 2010 season and one of the most enjoyable hunts I’ve been on. Kind of sad it ended so soon, but that means more vacation days for whitetails… Good luck on your hunts! Stay tuned more to come.