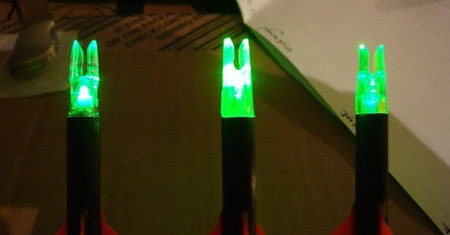 I want to start off this review by stating that I am in no way affiliated with any of these lighted nock companies. All nocks were purchased either directly from the manufacturer or from a retail location at full retail price. The purpose of this review was to perform a head-to-head comparison of three different lighted nock companies by shooting each nock 100 times each unless one of the nocks failed before the 100th shot was complete. The test was set up to shoot each nock individually 50 times immediately after removing them from the package. After the 50h shot was complete, the entire arrow (nock and field point included) was to be submerged for no less than 12 hours in tap water before shooting another 25 shots. At the conclusion of the 75th shot, the nock end of the arrows was to be submerged in a saline solution containing 1 tablespoon of table salt to 1 cup of tap water for a minimum of 12 hours. After the 12 hour submersion, the arrows were to be placed directly into a bow case overnight before continuing with the next 24 shots. The 100th shot was optional, and involved shooting the complete arrow into a concrete cinder block to test if the nock could survive such extreme shock. I purchased a green Firenock “S” series lighted nock directly off the Firenock website, and picked up a single green Burt Coyote Lumenock GT and green Double Take Archery Nockturnal-GT nock from my local Bass Pro Shop in Cincinnati, OH. The Firenock was $20.95 plus $5 shipping, the Lumenock was $10.99 plus sales tax, and I had to purchase a 3 pack of the Nocturnal nocks as there was no single pack of the green for $24.99 plus sales tax ($8.33 plus tax each). 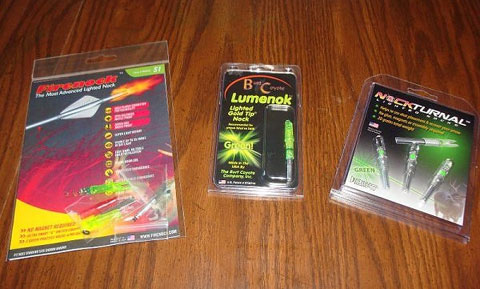 Packaging and Weight:
The first thing you notice after receiving the products is the packaging and contents. The Lumenock GT and Nockturnal nocks were blister-packed with a cardboard paper insert with instructions. The Firenock comes in an individually sealed clear bag with instruction sheet, product brochure, and two matched-weight practice nocks. The Lumenock and Nockturnal nock both come completely assembled and ready to use, where as the Firenock requires some user assembly prior to use. The Nockturnal nock comes as a complete unit with no field replaceable parts. The Lumenock battery can be replaced when the old battery dies. The Firenock is completely field replaceable meaning the nock, circuit, and battery can all be separately ordered and replaced whenever needed. I then opened each package to weigh each individual nock to see how well they matched the advertised weight using my digital grain scale. 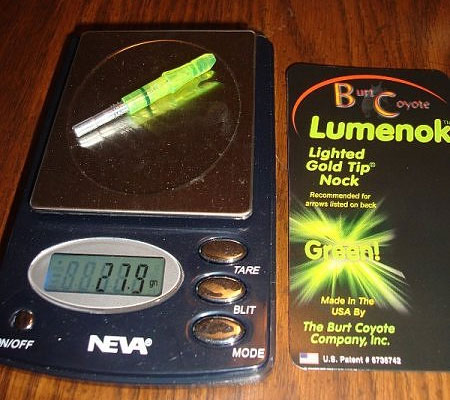 The Lumenock GT was the heavyweight of the bunch weighing in at 27.9 grains (advertised 27.9) 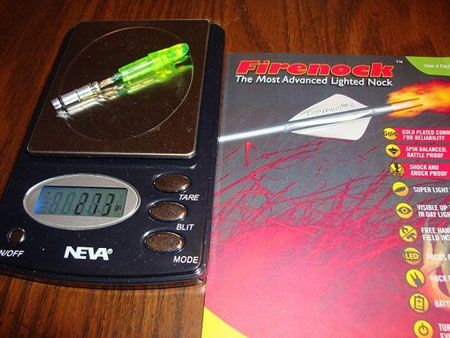 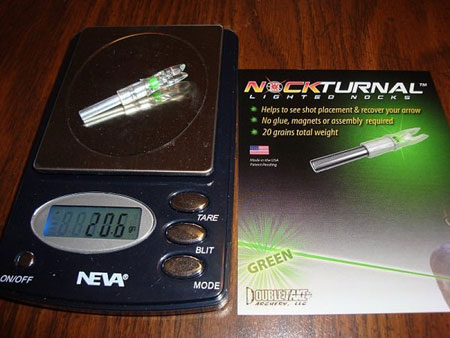 the The Nockturnal was the lightest at a weight of 20.6 grains (advertised 20).

Assembly:
As mentioned above, the Lumenock and Nocturnal nocks both come completely assembled and ready to insert into the back of an arrow before shooting. Therefore they both were extremely easy to prepare prior to use. I also mentioned the Firenock was the only nock requiring any assembly prior to first use. That being said, the assembly/disassembly of the Firenock was pretty straightforward. The instructions included inside the Firenock package were easy to follow, and contained figures which added an easy to follow reference to what the text instructions were trying to convey.

The Test:
For this evaluation, I chose to shoot my 2009 Mathews Reezen 7.0 with Gold Tip Big Game 100+ shafts at a distance of 12 yards into a well used Block 4×4 target. I began by shooting each nock one by one into the target. After conclusion of the first shot of each nock, I subjectively evaluated which nock was the brightest. The brightest nock from 10 yards was the Lumenock, followed by the Firenock, and the least bright was the Nockturnal. I then continued shooting the nocks one by one until I reached the 50th shot for each nock. After the 19th shot, the Lumenock lit in flight until it hit the target and immediately shut off. The Firenock and Nockturnal lit every time during the first 50 shots. After the 50th shot, I checked the brightness of the nocks again, and the brightest was the Firenock followed again by the Nockturnal. The Lumenock did not stay lit up after the 50th shot, so thereby was the least bright after that shot. 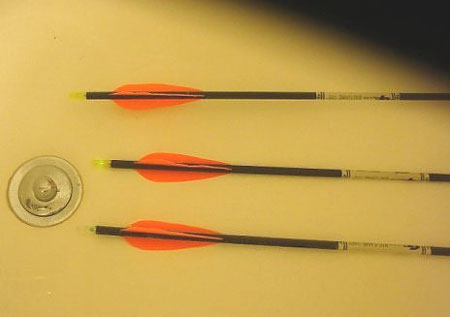 After the 50th shot, I soaked each complete arrow in my bathtub; completely submerged under tap water. 7 hours and 47 minutes later, I noticed the Lumenock was now dimly lit up while submerged under water. I removed the arrows from the water, turned off the Lumenock, and headed back downstairs to continue with the 51st shot of the test. The Firenock and Nockturnal both functioned properly, but the Lumenock lit until hitting the target. Upon retrieving the arrows from the target, I noticed a rattle to the Lumenock arrow. I pulled the nock out of the back of the arrow and noticed the battery was dislodged from the nock and was inside the arrow shaft. I attempted to reinsert the battery into the nock, but could not get it to go back in. I considered this a failure in nock design, and this was the end of the line for the Lumenock. I continued shooting the Firenock and Nockturnal arrows until the completion of the 75th shot. At that time, I again subjectively evaluated the brightness of the two nocks. The Firenock was again the brightest followed by the Nockturnal nock. 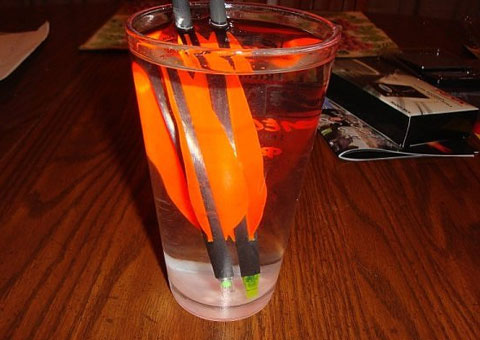 I removed the arrows from my case at 10:42 pm on 6/29/10 (a full 24+ hours after soaking them in the saline solution), and continued with the 76th shot of the test. The Nockturnal functioned properly after the initial shot after the saline solution test; however the Firenock failed to function. I continued shooting each nock an additional five times before investigating why the Firenock failed to function. Upon review, it appears the saline solution ate away the tiny battery pin o-ring. I am unsure whether or not the battery was/is at fault, or if there was a corrosion problem with the circuit itself. I have additional Firenock batteries in my possession, and had planned on switching the battery itself to test if the circuit was alright. While attempting to remove the battery, the battery wire connector snapped off from the circuit thereby rendering the Firenock circuit useless.

It appeared like there was some slight corrosion at the connection point between the battery wire connector and the circuit board causing the wire to break, but I have no way to tell if that was truly the case or if I was just too rough while trying to remove the battery from the wire connector. I continued to shoot the remaining 24 shots with the Nockturnal nock, and it performed flawlessly for the remainder of the testing. I opted not to shoot the optional 100th shot to test the durability of the Nockturnal nock as I am already short on practice arrows, and did not need to lose another.

Opinion/Observation:
In my opinion, each nock had both good and bad qualities. The very first thing you will notice about these products is the price. The price of the Lumenock and the Nocturnal nocks were very comparable with the Nocturnal getting the nod of being the cheapest at about $2 cheaper per nock than the Lumenock, where as the Firenock is nearly two times the price. The Firenock makes up some of this difference by providing two matched weight practice nocks, whereas the other companies provide nothing other than the lighted nock itself. When brightness is considered, the Lumenock was clearly the top dog. It was visibly brighter than the other two nocks I tested for this review. I do want to point out that the Firenock was tested using the included “BL” battery (light/long life battery), which according to the manufacturer has only 75% of the performance of the standard Firenock battery, but has a shelf life of up to 40 months compared to 15 months of the standard battery. However, I cannot say with any certainty without testing them against each other, whether or not the Firenock would be brighter than the Lumenock if it was tested using the standard battery instead of the long life version.

The next item to consider is the method of deactivating the nock after shooting it. The Lumenock was the easiest to deactivate by simply giving the nock a slight pull until it shut off, followed closely by the Firenock, and the Nockturnal deactivation method is probably the hardest out of the three nocks although it is not entirely that difficult to turn off either as long as you have a good knife or other pointy object handy. However no method of deactivation is in any way hard so others may rightfully disagree with my personal feelings on that matter. Finally, durability has to be a concern when evaluating the nocks as well. The clear winner in this category has to be the Nockturnal nock as it is the only nock to make it through both submerges in liquid and function properly for the entire 99 shot test. The Firenock is obviously second in this category, followed by the Lumenock which was removed from the test after the failure on the 51st shot (and because of two prior failures in the first 50 attempts). I will close this review with a short two to three bullet list of both pros and cons of each company’s product. I hope you found this information useful, and I urge you to complete this testing procedure yourself so you too can make an informed, non-biased decision on what lighted nock is best for you.

Pros:
*Brightest nock tested
*Semi field replaceable
*Ready to go straight from the package
Cons:
*Not very durable
*Heaviest nock tested
*Finicky about shutting off (will turn on dimly for no reason sometimes)

Pros:
*Most durable in the test
*Cheapest nock tested
*Lightest nock tested
Cons:
*Weakest in terms of brightness
*Hardest to deactivate due to needing a tool
*No parts are replaceable

Pros:
*Completely field replaceable
*Matched weight practice nocks included
*54 LED/nock color combinations
Cons:
*Most expensive lighted nock on the market
*Battery wire can easily be broken
*Some people may not like dropping the nock end of the arrow on a semi-hard surface to deactivate

After letting the Nockturnal nock sit idle (out of an arrow on a desk) since completing the test on the 29th, I loaded it up into a shaft again to see if it still works. Well, I think the salt solution took its toll. I shot it 2 more times and both times it failed to light. If I were a betting man, I’d say if I let the nocks (Firenock and Nockturnal) sit for a couple days after soaking them instead of the one night, the Nockturnal would have failed on that 76th shot as well.