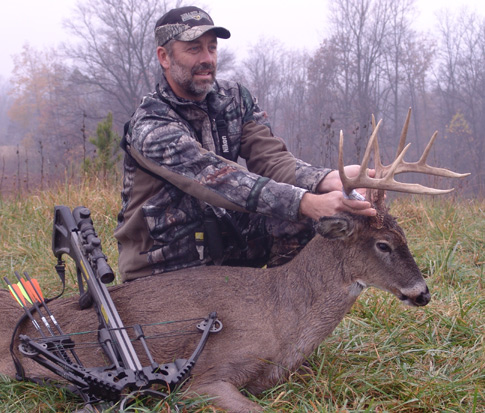 Bob Humphrey had seen a 10 point the first afternoon but couldn’t get a shot. The next morning he hunted 50 yards in the woods on the down wind side of a food plot. He saw a good 8-point and several does. A spike chased the does. Shortly after, Bob kept hearing a grunt in the woods but couldn’t get a direction on it. He grunted several times and a 10 point came over the hill 90 yards to Bob’s right. It came through the trees in Bob’s direction.

Bob got his crossbow ready and the buck stepped into the an opening in the woods. The hit was lower than expected.

Bob let the deer lay for 4 hours and took up the track. They followed the trail to a creek and Bob jumped across the creek to find the blood on that side. As his feet hit the ground the buck jumped up 30 feet away and ran. It had been laying in the water.

Bob decided to stop right there and back out. That night it off and on all night.

The next morning Bob and 3 others returned to look for the buck. They spread out and walked in the direction the buck had gone. Brian Richard saw the antlers ahead of him and whistled at Bob the buck was found.