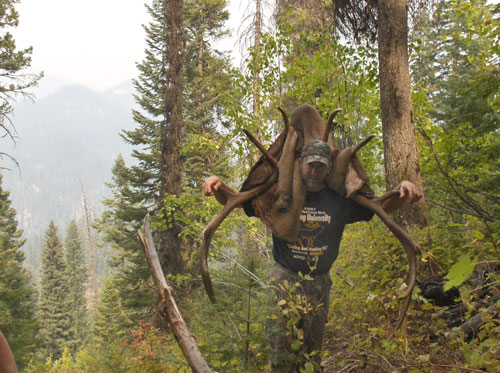 Careful, considerate, ethical hunting results in a satisfactory hunt and sometimes a rewarding one.

A monthly Column from Alpine Archery

I was taught early on in my hunting career the meaning of ethics and respect for fellow sportsman and the game I was pursuing. The teachings and guidance of my Grandfather and Step Dad in those early years still hold true to me today as if I was just learning them.

Every year I see, and hear stories of the lack of ethics and respect for fellow hunters in today’s society. In Hunter’s Education we teach that “Ethical behavior is doing the right thing when no one else is watching – even if doing the wrong thing is legal.” I had a chance to sit down and eat lunch with several members of the Alpine Archery Shooting Staff this past summer at an archery shoot in Stanley, Idaho. What a great bunch of individuals with a vast array of experience and knowledge in the hunting and competitive shooting realm. The stories of individuals they had encountered over the years that were mistreating the land and tales of “great” shots really made me feel blessed to be raised and taught in the manor I was.

This past fall I was at a gas station on my way back to elk camp and overheard a couple of young men standing around a pick up listening to one individual tell about the shot he had made on a bull the previous morning. The only shot he had was at the head and upper neck area at 80 yards, but knew he could make the shot due to the fact that he spent all summer winning 3d shoot after 3d shoot. He took the shot and was amazed that the bull dropped upon the arrow entering the eye. I stood there and shook my head as I filled up my truck. The young man noticed the company decals on my truck and asked if I had ever taken a bull at that yardage. My response was “It never occurred to me to try.”

I took this opportunity to remind him that it is our responsibility as sportsman to harvest the game we are after with a quick clean ‘ethical’ shot. He responded by saying “It doesn’t get much quicker than dropping on the spot.” I guess he really missed what I was trying to say and I could tell that I would not get anywhere with this group so I finished up and was on my way. The rest of the way up to camp I was really bothered how the group was impressed with this shot and congratulated him for making it.

After a couple of days chasing screaming bulls and close encounters, I was once again at peace and had put that incident behind me when I was reminded and shown the lack of respect that exists. Jim and I had gotten up two hours before sun up to make sure we had plenty of time to eat breakfast and be up on the mountain side before first light. Upon getting out of the truck we could hear a bull bugle up the canyon where we wanted to go and that made us move a little bit faster since we were the first ones to the trailhead. The trail up in the canyon only provides hunting on one side as the other is a shear cliff down to the river. The plan was to hike up the trail about a half mile and then start working our way up the hillside to keep the wind in our favor.

The bull continued to bugle back to us as he was heading to his bedding area and we continued to gain elevation and stay to the side as the thermals were getting ready to change for the day. About mid morning we had finally reached a point where thermals were blowing up the mountain steadily and we were on the same elevation as the bull.

Now is the time to really move in and work this bull. Jim started moving farther out in front of me as we worked toward the bulls’ location. The set up was perfect. As the bull started to work into the shooting lane Jim had picked, I could hear branches breaking down below. I thought it was some cows or another bull coming in when I saw two guys sneaking in to get a shot at the bull. Of course the bull caught their wind, whirled and left the country. We had been patient all morning to make sure the set up was in our favor and these two guys come along and don’t even pay attention to the wind.

I understand that this is public land hunting and we all have a right to hunt it, but when someone gets to a trailhead or a spot I want to go before me I will just go some place else so we won’t bump into each other. I was curious where these guys had come from so I headed down and started talking with them. They stated they had parked right next to us and come up the same trail we did, basically following our tracks. They even stated they were aware we were up there but thought they could sneak in and get a shot at another bull on the outskirts. Jim asked if they understood how thermals worked and they responded by saying they don’t worry about the wind because they spray down with non scent.

Did I really just hear all that? I was still in shock that someone would park next to a vehicle, follow the tracks and purposely sneak in on someone else while they were working a bull. We all sat down on the side of mountain and spent the next hour talking about things we were taught growing up. Turns out these two never had anyone teach them about ethics or respect. We all continued to talk as we worked our way off the mountain and headed back to our trucks.

Hunting with a bow is challenging enough without having to deal with individuals that demonstrate the lack of ethics or respect for fellow sportsman and game. We have all heard stories of individuals slashing tires or cutting plug wires to teach a lesson. That’s certainly not the answer. Perhaps we all need to remember the lessons and teachings that have been passed along to us and take the time to share them with others. These encounters can be a great opportunity to remind us all of the Lessons of the Fall.