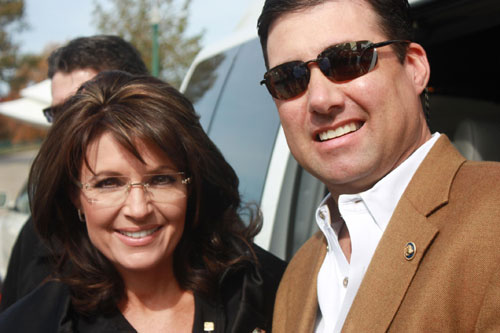 Gov. Sarah Palin with Frank. It just doesn't get any better than this!

In support of a candidate that is running for the US Senate from West Virginia for the Republican Party, Ted Nugent and Sarah Palin were in Charleston, West Virginia for the event. With the election just days away, GOP Candidate John Raese hosted the event to get voters excited about his run for Senate. The seat was vacated when the late Robert Byrd passed away earlier this year.

I went to visit Ted and Toby Nugent, although it was a quick trip in and out for them. Security came and got me and took my uncle and I to a van where the Motor City Mad Man was waiting to go on stage. We chatted for a few minutes and then I looked in the back seat and saw Todd and Sarah Palin. I laughed and told Ted, “You’re keeping good company today aren’t you?” and he grinned and replied, “You think?”

I briefly met Todd and Sarah Palin, had a quick photo with her and then they left for the stage. I took a seat and watched as the program got underway. A local band had played some good 1970’s rock and had spirits high on this beautiful autumn day.
Congress woman Shelly Moore Capito spoke, Candidate John Raese spoke, his Mr. Raese’s wife introduced Sarah Palin. Former Gov. Palin gave a warm speech and high lighted God, guns, hunting, and the wise use of our natural resources.

Then came the Motor City Madman. I was amazed to again hear Ted’s version of the National Anthem played on his electric guitar. He gave a great speech which contained many “Tedisms”. He also touched on being an asset, God, guns, bowhunting and freedom. He clearly struck a chord with the audience. They responded warmly to his speech and gave him a lot of applause.

As the program wound down, the crowd swarmed the stage to meet Sarah, Todd and Ted. I didn’t get to say “Adios” but Toby Nugent texted me awhile later and let me know they found the Hoyt hats I’d left in the van for them. One of his last text’s told me that Sarah had grabbed one of the Hoyt hats. I laughed and I hope to see a photo of her in that hat soon. Watch for it, it was a camo Hoyt hat.

I hope all of you will exercise your civic duty and go vote this November. Although it is the rut in many prime deer hunting locations, many have given their time and lives so that we have the right and ability to vote. So please, November 2, go vote. It’s the least we can do to thank those that have given so much.

Until next time, Adios & God Bless.

It's a Thanksgiving Sale from C'Mere Deer!