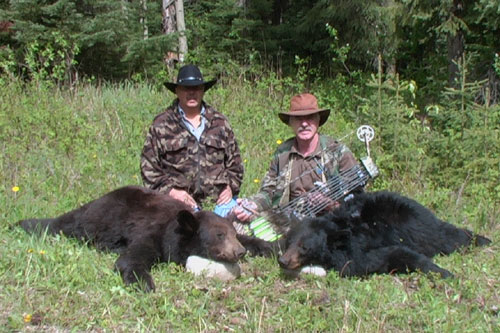 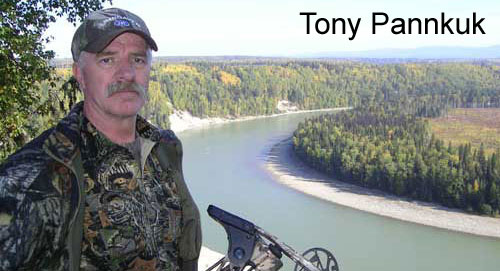 Sponsored by: Victory Archery and LimbSaver.

As we stood in silence and unseen, Rick quietly tapped me on the shoulder, pointed and whispered, “I saw a limb move about 30 yards in front of us”. No sooner then he finished whispering, the bush seem to come alive with a 6’ 2” black bear charging our way. I was stunned at first, causing my legs to become weak. I took two quick steps backwards but as a seasoned hunter would do, I held my ground. Quickly raising my bow, I drew back; the bear was closing in on us at a fast pace. I had two or three seconds at the most to place the arrow in the right spot. I wanted to wait until the bear turned sideways, but it didn’t. We only want to take boars and I though maybe this is a sow with cubs and she was agitated of our presence. I was the only one with a weapon; Rick was my guide and he was filming the hunt.

I was hunting spring black bear with Sentinel Mountain Safaris in British Columbia, Canada. I have made this trip several times before and each time, I have been successful on filling my tags. This time I will be using a PSE bow. In the past while hunting in British Columbia, I have taken several black bears, moose, wolves and a grizzly while using a rifle or muzzleloader.

With British Columbia having between 120,000 to 160,000 black bears, it is the best bear hunting area in the world. When you have a secret hunting spot where you are always successful you usually keep quite about the location. But Outfitters, Steve Saunders and Roy Pattison of Sentinel Mountain Safari’s, limit the bear hunts in their hunting concession. We see between 30 to 45 black bears and three to six grizzlies during a five-day hunt. Each year, Steve and Roy are 100 percent on all black bear hunts. Some hunters choose to buy a second tag and if they do, it is also filled. Steve and Roy go out of their way to make sure all hunters will have the opportunity to take a bear.

Adult male black bears range from 4 feet 2inches to 6 feet in length, (some are even larger) and weigh 130 to over 600 lbs. Black bears vary considerably in size, depending on quality of food available. Males may be from about 20 to 60 percent larger than females.

Last year, I took a black bear and a grizzly using my Remington 338 rifle. Roy challenged me to use a bow so I took him up on the challenge. I have been hunting with a bow for about 30 years but have never taken a bear with it. Knowing that we would see a good number of black bears, I knew we would have several opportunities, if needed.

On the first day of the hunt, Roy and I spotted a chocolate colored black bear. Having taken several black bears over the years, a chocolate or cinnamon color bear has always eluted me. The chocolate bear was on a logging road in front of us around 200 yards away. There was no way we could put a stalk on it. We watched it for a few minutes working on a plan as the bear disappeared into the bush. Both Roy and I took off our boots; we surreptitiously made our way forward to where the bear had entered the thick bush. When we reached the spot where the bear left the road, we stopped and listened for a few minutes. The bear was gone and so was my chance of getting a chocolate bear. The thought ran through my mind, if I had my muzzleloader or rifle, it would be my first color phase bear. We slowly walked back to the pickup, gathered our boots and continued driving until around 11:00 am with no other bears in sight. We decided to head back to Roy’s cabin for lunch, and then go hunting again around 4 p.m.

Over the years hunting with Steve and Roy I have learned you can fill your tag on the first day of the hunt if you want. I always wait for a bigger bear, so it is usually the second or third day before I fill my tag. Last year I waited until the forth day before filling my black bear tag but was fortunate on the fall grizzly hunt to fill my tag on the first day with a grizzly that measured close to 9 feet with a weight between 650 to 700 pounds.

Spring black bear hunting in British Columbia is one of my favorite hunts I do each year. After the bears leave their dens from hibernation, they look for a good food source to gorge themselves to make up for the lost body fat from the long winter. Steve and Roy have miles and miles of pipeline and hydro (electric power) lines crossing their concession. The pipeline grass greens before any other area because the oil and gas keep the ground from freezing as hard as the surrounding areas during the hard winters that’s common north of Prince George in British Columbia. You can hunt for five days without seeing another hunter, unless you have some hunters in your party.

On the second day of the hunt, Steve, guide Rick Hamilton and myself headed out to locate our prey. It was late in the afternoon with the sun brightly shining overhead. We drove to a location where we have seen bears on several occasions in the past. Steve again spotted two black bears about one half mile away. One was black as the night and the other was the chocolate bear that Roy and I spotted the day before. We stopped the vehicle and quickly got out. Steve said he would continue on a side road to keep the bears from making their escape into the thick bush. Guide, Rick Hamilton and I dropped off the ridge that we were standing on and where we could keep the bears between the Crooked River and us.

We were nearly undetectable as we slowly made our way down through the thick tranquil bush. It would open up in spots and we would get our bearings and thoroughly glass the area in front of us. After around 30 minutes of quietly making our way forward, we stopped and as we stood in silence, unseen and undetected, it was then that Rick tapped me on the shoulder. Charging our way, the bear caught my movement of raising the bow. Blending in with our camo outerwear and face nets, the bear could not make us out for what we were. It stopped and stood up on its hind legs putting its front legs on a tree to steady itself to get a better look. It was then the bear presented the shot that I was looking for.

I released the Victory Archery carbon arrow mounted with a 125-grain Maniac EX AfterShock Archery broadhead. It was a complete pass through and the bear disappeared into the bush. I quickly moved to my right about 10 yards and caught the movement of the second bear. I quickly raised my bow and let another Victory Archery arrow on its way. It also was a well-placed shot and a complete pass through. In a flash, the second bear was also gone. Rick came over and asked if I hit it the second time. I replied by saying “it was another bear, the chocolate one” and I had kill shots into them both.

Rick told me to wait here and he would go get Steve. After around 25 minutes, Rick and Steve arrived; we figured it a long enough wait to start our tracking skills. It was a short 30 yards when we found the first bear. It was the black bear that gave me the scare of my life. We took pictures and marked the area with ribbon and we were off to find the chocolate bear. To our amazement, it was within 40 yards of the first bear. We took more pictures and then put both bears together for the final pictures. Both arrows exited the two bear with well-placed shots going thru the lungs. Both the chocolate and black bear had thick shinny fur with no rub marks. They both will make great full mounts.

What a great and successful hunt again with Sentinel Mountain Safaris. I took both bear on the second day of a five-day hunt within 30 seconds of each other. If you would like more information on Sentinel Mountain Safaris, you can check them out. I have hunted with Steve and Roy for several years now and would highly recommend them. You will have the opportunity to take a bear, the shot will be yours to take or pass.

Steve and Roy are professional hunters and started hunting and fishing in their early teens. In addition, these two will increase the hunting opportunities for the hunters like me. They have moose, deer, black bear, grizzlies, wolf, lynx, bobcat, wolverine and coyotes plus waterfowl and grouse to hunt. Just a note to add: I took my fifth wolf hunting with Sentinel Mountain Safaris this past January using my LimbSaver DeadZone 30 bow.