Aging Whitetails on the Hoof

by Colby Ward
in Bowhunting Posts
0 0
0 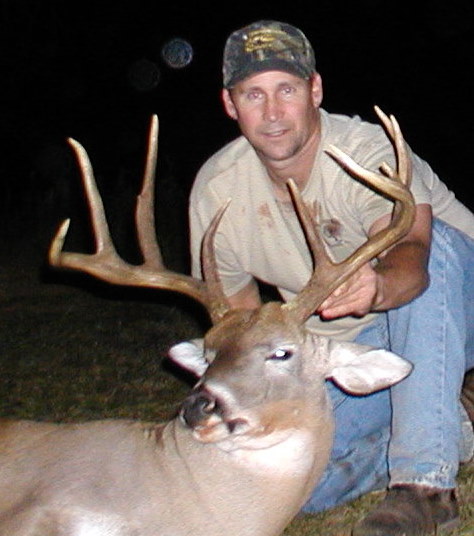 Author with a 6.5 year old free ranging bruiser that weighed 210 lbs and has a rough score of 155 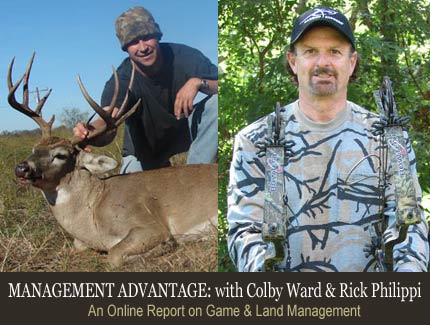 In this article we will discuss the important role that age structure plays in managing whitetails. Significant amounts of data indicate that a whitetail buck will not grow its best set of antlers until after its body has fully developed; which typically occurs around five to six years of age. In the early years, majority of the nutritional intake is helping develop muscle and bone structure. Once the buck’s body is fully developed; the nutrition will be in large part directed toward growing large antlers. Typically we will see buck’s sport their largest antlers at age five, six, seven and eight years of age. Once a buck gets to maturity; weather, habitat, amount and quality of supplemental feed and injury or sickness all play a factor in exactly when he will have the largest rack.

One area that we made a big mistake early in our management plan was to shoot bucks based on the size of their racks. Although we meant well, the outcome was not good for the long term. We set a self-imposed restriction of shooting 130class bucks or better. Although we shot some great bucks, many where 3.5 year old 10 and 11 point bucks with incredible potential. These bucks not only held our best genetics, but also had the potential to be something really special.

Hopefully you can learn from our mistake and go directly to a plan of shooting bucks based on age rather than just antler size.

I know that many of you are thinking, that if you see a great deer walk out you are going to shoot it or someone else will. This statement is so common, and yet it can be a self fulfilled prophecy. Don’t you think that if you are saying that, then your neighbors are saying the very same thing about you? We need to get rid of this thinking once and for all. I would encourage you to talk to your neighbors about your management plans. If you are hunting a small parcel of land, cooperation from your neighbors will go along way in helping you get consistent results.  More times than not, I believe all the hunters around you would love to also adopt a management plan to consistently grow trophy bucks.

The truth of the matter is that you will start to see results in just a few short years if you let those quality bucks get some age under them. Three years is enough time to establish a good diverse age structure in your deer herd. The sacrifice will be well worth it. Imagine what it would be like to see mature bucks roaming your hunting land on a regular basis. There truly is something special about watching mature bucks in their native habitat.

The hardest part of implementing a plan like this is educating your hunters on field aging deer; and of course holding off on that 3.5 year old 11 point that walks out half way through deer season. If you can accomplish this, your patience will be rewarded.

So let’s talk about field aging whitetails. One of the best ways to educate your hunters in my opinion is to set up motion cameras late in the summer and the use of video cameras prior to and during hunting season. Deer pictures can be reviewed by the group and determined the age of selected bucks. Reviewing photo’s and videos of bucks is very educational, fun and sets the stage for some good conversations. We have Spypoint cameras set up throughout our hunting property and try to space them out so we have good coverage or our land. It really is amazing what types of bucks these cameras will pick up. We have seen many large mature bucks on camera, but to this day have escaped the human eyeball. Check out SPYPOINT cameras at www.spypoint.com

I will give you some basic guidelines, but encourage you to match these with the deer you are hunting; as it could vary based on location. It is pretty easy to field age your bucks once you get a feel for the animals on your property. Guess the bucks age and then use tooth wear to determine if you were correct or not. If you are lucky enough to see multiple bucks at one time, you will be able to pick the 1.5, 2.5, 3.5 and older bucks apart. Over time, you too will be able to determine if your bucks on the hoof are mature or not. Let’s look at clues you can use in the field to better estimate a buck’s age.

Antler Clues: Antlers can be good indicators of age, but don’t really on antler characteristics alone.  There are certain characteristics that you can look for in antlers in conjunction with body indicators. As a buck matures, antlers typically will gain mass, get darker and wider. If non-typical points are in its genetics they will often show up as maturity sets in. So if the buck you are looking at has antlers wider than its ears, are dark in color with good mass and sporting some non-typical points chances are it is a mature buck.

Fawn Buck: Most hunters feel they would never mistakenly shoot a fawn buck in place of a doe. This mistake is made all too often however. The best way to tell a fawn buck is to look very close at the deer’s head for pedicels (nubs). These can be barely protruding so look very close. A fawn buck will typically be smaller than the does, but larger than the doe fawns. Does very rarely travel alone, so if you see a lone doe there is a good chance it is a fawn buck.

Young Buck (1.5 years or younger): The face will be slender, pointed nose and dished or concaved muzzle. The body will be slender overall and looks like a doe with antlers. The deer will have a straight backline and underline. Glands on hocks are small and not very dark. Antlers will be light colored with small bases. These deer will tend to be more social (running with does) outside of the rut.

Middle-age (2.5 to 4.5 Years old): Face will be straight with a flat muzzle and nose with a straight lower jaw line. The body will generally be larger than does, heavily muscled, appear to have a larger neck and shoulders. The back will be straight or just starting to sag and have round hips and rear. The tarsal glands on hocks will be larger and darker. These deer are less social, only on occasion being around does and young bucks outside of the rut. Antlers are starting to darken but relatively thin at the base.

Mature Buck (4.5 years and older): The face will be graying at the muzzle and forehead, with often a dark coloration on top of the head between the antlers. Nose is “Roman” and appears blunt. The jaw line will show signs of sagging or appear loose. The body of the deer is now muscled up and appears much thicker with short looking legs, deep mid body and deep neck and shoulders. Look for heavy shoulders, square hips and rear and an obvious “pot-belly”. The tarsal glands on hocks will be large and dark.  The deer walks with a slow stiff gait and is mostly a loner, except during the rut. Antlers will be wider than his ears, dark in color and carry good mass.

These characteristics are only clues to a deer’s age. After a deer is harvested it is critical to age the buck by comparing the wear of the teeth, which is the best and most accurate indicator of age. This will be the true test to determine how well you are field judging whitetails.

If you are serious about consistently growing trophy deer, you need to have good habitat that provides year round quality nutrition and a well distributed age structure in your whitetail herd.  There is no time better than today to get started with your management plan. If you hunt on small acreage or large acreage, with a little coordination you too will be able to reap the rewards for many years to come.

Concerns of the Disabled or Aging Bowhunter