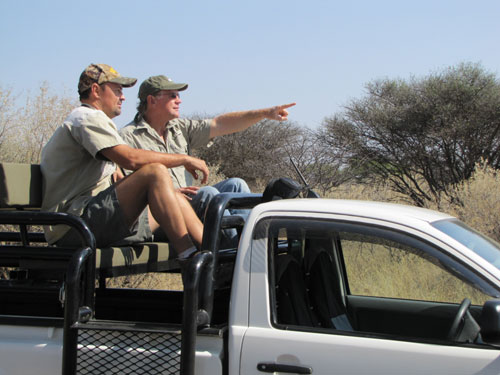 Dries and I toured the new property and spotted free-ranging plains game every few minutes. It was like being in Wyoming looking for free-ranging elk or mulie's.

My first time in the Kalahari was magical. I accompanied my friend Dries (Pronounced – Dreez) Visser to the Central Kalahari Wilderness for a leopard hunt. This trip across Botswana involved following a GPS on a 50 mile trek across a two track in the sugary sand. We carried 5-gallon Jerry cans of gas on top of the Land Rover and kept the windows open to enjoy the grassy smell of the vast desert. Twice we had to get out the tow ropes and pull one another up a rise where the sand was too deep for the tires. What an adventure.

When we finally arrived at dusk we encountered two free ranging lions on an Ostrich kill. A Brown Hyena paced down the road in front of our head lights as we approached the camp. His huge head and chocolate shaggy body spoke of the wilderness that now engulfed us. His jaws are the most powerful on the continent capable of crushing elephant bones. This was Africa at its raw best. Death still ruled the night.

I’ve been back twice since then and It still has all of the magic. The Kalahari Desert is a mega wilderness area that mostly rests in Southern Botswana but also spills out into the wilds of Namibia to the west. It is home to the oldest of all African people, the Sans People or Bushman. They are some of the most plugged in aboriginal people in all of Africa. Bushman hold claim to the title as the best trackers on the continent.

Just a few weeks ago I was in the Western Kalahari again with Dries surveying his new Bowhunting Mecca in Namibia. Like the same desert to the east in Botswana, this place is wild. Wild is great and the remoteness is also a plus. We didn’t see a farm for about an hour before we pulled into his new bowhunting base camp on a wide red gravel road two hours out of Windhoek.

I thought I was in Pennsylvania as we approached the new property because in Pa. we have whitetails crossing the road like runaway bowling balls at dusk and here we had 2 kudu bulls, 5-6 springbok and a gemsbok cross in front of us during the last 5 miles to the gate. Free-ranging plains game!

Dries, I and the ranch manager Zander Kruger, spent the next day riding across the vast property inspecting waterholes and getting cards out of game cameras. Riding in the back of the Safari-packaged Toyota truck is among my favorite things to do. We call it a game drive and that is exactly what it is. We had game in view every few minutes.

The center of the property is under a management fence and houses 10-thousand acres and a dozen or more waterholes with bow blinds. This area is populated with plains game and natural propagation has beefed up the population for at least five years since the last hunter walked here. It was developed as a hunting area and then the European investor pulled out. Next Dries took over ownership and now it is being groomed to be the premier bowhunting hot spot in West Africa.

After an impressive investment in new facilities/lodge and camp is taking shape. Dries has been running South Africa’s best bowhunt at his property near Thabazimbi for 16 years. He always vacationed in Namibia and finally decided that he could develop a first class bowhunting operation here if he could find the right property. Last year he located this hot spot. The factor that tipped the scales for Dries was the unique weather pattern that this region enjoys. Unlike Western and Eastern Namibia that gets 8-10 inches of rain this region gets about 30-inches of moisture per year. That means the grass and vegetation is rich in nutrients and the indigenous plains game herds are healthy and expanding.

We came upon a peculiar fence opening in the 5 strand 5-foot high old cattle pasture. It was sort of a gate but it had a top member and a narrow gateway. There were trails leading to it from both side alike a spider web. I asked Zander what in the world this was and he smiled and said, “This is how the old German ranchers built their fences to accommodate the wild herds of Gemsbok”.

He explained that while a Kudu or Springbok would just jump over the low fence and a warthog ducks under a Gemsbok is not a jumper and they needed a gate that would allow them to pass through yet not allow a cow through. Not 20-minutes later I saw a free ranging Gemsbok approach a Gems-Gate and duck through it while running like it wasn’t even there. How about that! Farmers who respect the local game animals need to cross their property.

The desert dweller gemsbok utilize the windmill driven waterholes that are scattered across the 50,000 acre concession. they all know where the Gems-Gates are located.

Attention Bowhunting addicts: I’m posting some really educational video clips on hunting plains game on Bowtube for you to enjoy that feature Plains Game we have in Namibia. They include an overview of the critter plus surprising shot placement footage in the hunts.  To view video CLICK HERE

Dries is opening his new bowhunting only area to hunters for the first time this next summer (2011). He has put together some introductory packages that defy reason when it comes to value and affordability. The best thing about this new bowhunting only area is that it is being put together by a man who is a bowhunter himself. He’s incorporating all of his accumulated knowledge and all of the advice he’s received from bowhunters from around the world in to this new property.

Combine that with 10,000 acres under management and 50,000 acres of free range plain game and you have Africa’s most unique bowhunt. We are taking only 32 hunters in 2011 in small groups of 4. Our 8 hunts are spaced across 5 months, from June -October. If you have ever considered bowhunting Africa, Namibia should be on the top of your list. If you are an organizer we have a free hunt for you. Email me for details on bowhunting the Western Kalahari. BowhuntNamibia@gmail.com.