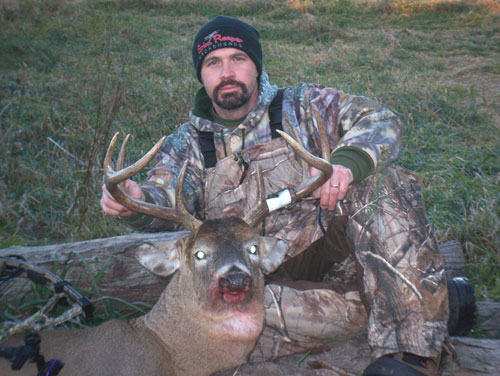 Every year we all hope to head somewhere new and exciting to hunt different animals and terrain. Illinois fit the bill for me in 2010. Having been born and raised in the West, I have spent most of my hunting career chasing western game such as: mule deer, elk, black bear, black tail deer, etc. Despite having hunted many different states I had not previously been able to hunt Whitetail and jumped at the opportunity when some friends invited me out to IL.

As one can imagine, I was in for a totally different experience hunting whitetail bucks from 20-30ft up in a tree! As a guy who is accustomed to spot and stalk hunting, it was difficult being told to stay put in a tree from sun up to sun down. My friends were keeping me well informed of the conditions and called just before my departure to let me know that the bucks were on the move and chasing does all day long. Despite the challenges of a different hunting style, I could not wait to get out there and have a great hunt that would ultimately prove to be a great test in patience.

Day 1
I got into the stand nearly an hour before sunrise, with high hopes of big bucks and bloody arrows! The woods were quite and still, with temperatures in the low 20’s and I was anxious for the sun to rise bringing the woods to light and warm my frigid toes. As the sun rose above the horizon, the woods started to come to life. Every noise helped keep my attention thinking that it could be a buck on the move. I never realized just how quite things could be when one sits so still for so long allowing the woods to come to life on its own terms, it was an awesome experience! After several hours in the stand without seeing anything beyond squirrels and birds it started to sink in that this was going to take some serious commitment and patience to pull this off. The day rolled on and soon dusk turned to darkness and I made my way out of the tree for the night.

Day 2
I again found myself in the stand an hour before light, and anxious to see some deer on the move. While waiting once again for the sunrise to take the chill out of the frozen air, I received a text message from my friend asking how things were going. When I informed him that I hadn’t seen anything yet, he told me “it’s time to make something happen” and I was all ears! The night before he showed me a map of the area and told me some areas where they had deer moving and suggested some ambush locations. Making a move was something much more accustomed to my style of hunting and I couldn’t wait. I climbed out of my tree and grabbed the climber stand and headed to one of the ambush areas. After getting setup, I began my patient sit hoping to catch a buck on the move. After a few hours, I received another text from my friend asking of my luck. Again, I responded “no deer”. He said “make it happen” and suggested I move to another area. So once again I relocated to another high traffic area, but with no luck.

Day 3
I found myself in a new area of the lease with a renewed sense of hope. I once again climbed into my stand long before sun up and enjoyed the experience of another beautiful morning. But soon after there was no movement I was beginning to feel a bit discouraged, but I told myself that I hadn’t traveled all this way to sit in a tree and whine! So I stayed focused and tried to ready myself for anything that could come my way. As we all know a frustrating hunt can turn into the hunt of a lifetime in an instant. As dusk started to settle in I heard something moving through the woods that was actually heavier than a squirrel, so I slowly stood and readied my Hoyt for the shot. My heart raced as whatever was making the noise approached. Soon I could see the unmistakable brown silhouette moving through the woods coming right towards me! When the deer finally made its way into an opening I realized it was a doe and she was alone.

Once I realized there was no buck in tow, I figured it was a good time to fill the doe tag. Since I had been in the same stand all say I had studied the terrain closely and knew where she was headed. Once she made her way into a good opening I had previously ranged at 25 yards, I knew this would be my chance. I drew back on my Hoyt, settled my pin and let my Grim Reaper Broadhead fly! It found its way through both lungs and made short work of the mature doe! After the doe was taken care of I was ready for bed to get some much needed rest.

Day 4
This morning started the same as all the others, 22 degrees and waiting on the sun. However unlike the other days this one would start out with a bang! I immediately heard a lot of commotion and the unmistakable sound of a Whitetail buck grunt! Before I knew it, a hot doe and buck were heading right by me. I began to panic as they were on the move and quick! I knew I had to make something happen, so I gave a good grunt and that’s all it took! He came right at me and stopped, scanning the woods to locate the buck who had grunted at him. I knew he was close so there was no need to range him. I settled my pin and let the 1 ¾” Reaper Razortip rip again!

Again it found its mark and I watched as my buck struggled to get 40 yards before expiring! My hunt was over and my perseverance had paid off, what a great experience IL was!

I would like to encourage everyone to save their pennies for an out of state hunt, it just might be the experience of a lifetime!

Fat Boy vs The Fighter