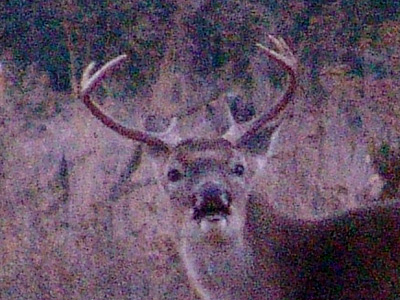 35 degrees. 5 mph wind. Clear. Hot coffee tasted good. Daylight. Today it eased in, from black to day. No color show but still nice. Four does showed up first. A 7-point walked up out of the woods to the north. 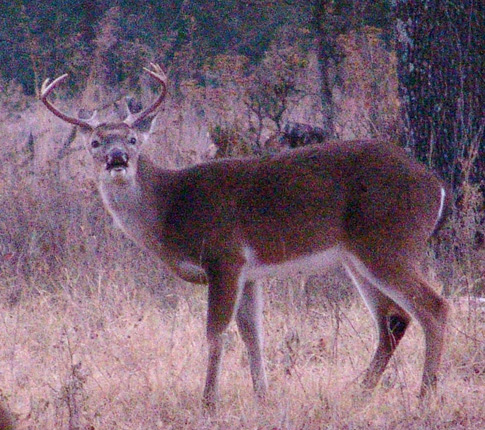 The does ignored him. He was 16 yards away from me.

I posted on FaceBooik and Dawn said I was a hunting maniac. Hmmm, I like that. When people ask me what I do, from now on, that’s what I’m gonna tell them. Thanks.

A smallish button buck chased a doe twice its size all around the area. In the deer world, I guess size isn’t as important as an aggressive attitude. The 7-point spotted 2 does on the hill and strutted over to him. Ahhh, but they ignored him too.

The big doe finally stopped and clobbered the button head in the face with both her front feet. He backed off but ran over to another button buck and gave him the ears back challenge. Then they sparred and pushed each other around. I got some pics. 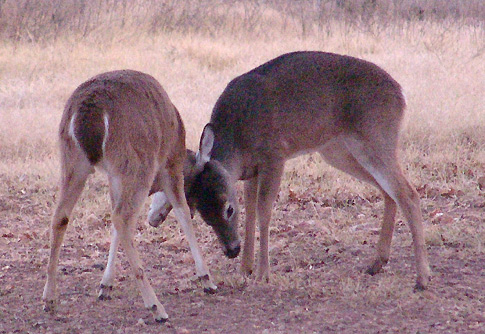 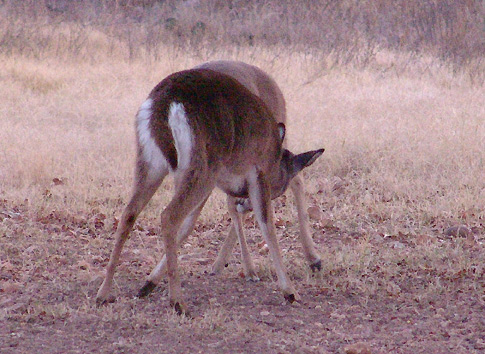 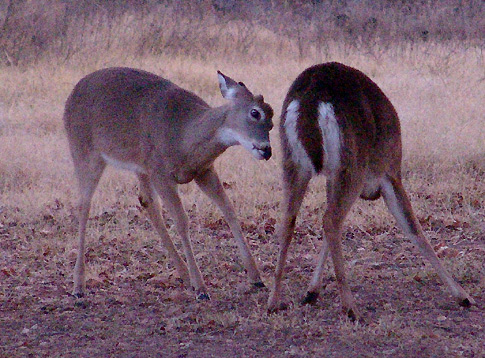 After the button buck skirmish everything cleared out for a while. Then I saw two does on the hill coming in my direction.

Then it rained deer.

Soon I had 9 does and 2 button bucks … and saw a young 8-point walking around on the hill.

A buck came up on my left and checked out the does. 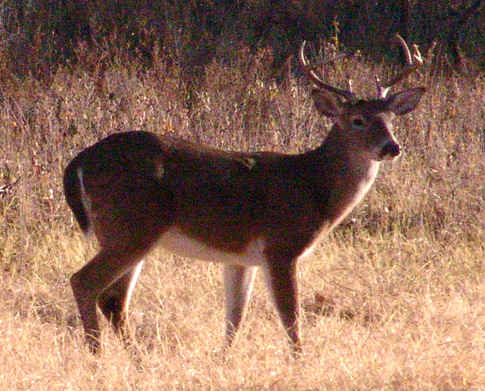 Not finding any interest he returned to the edge of the food plot and urinated on the ground. 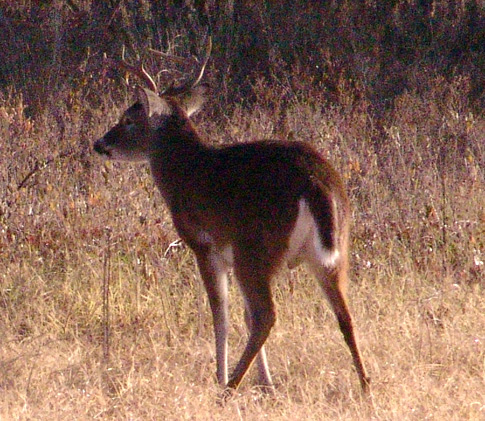 Before long everything cleared out again. Probably going to the bedding areas … which not so ironically are 300 to 300 yards away in 3 different directions.

The small button and doe with black hocks from yesterday showed up. Surely they’re not, are they?

Hmmm, maybe so. The young 7-point appeared out of nowhere. Walked right by me, as you can see. He grunted loudly and went after the small doe – neck extended and still grunting. 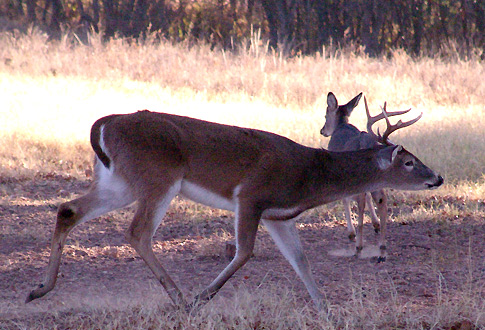 They turned and ran by me to the left and then came back. The button ran for the trees to the north. And the doe went west into the gully, with the 7 right behind her.

I love this stuff. All this deer action is making me real hungry.

The wind started to gust. Temp was 39 degrees. The sun was bright but not warming things up yet. After the romeo button head left I decided to give it 10 more minutes before I went to the house. (unless I see something deery.)

Glad I didn’t get out of the blind, an 8-point snuck in and watched the area from 67 yards away, barely visible behind some trees. Fortunately I saw it. It watched 15 minutes and left. 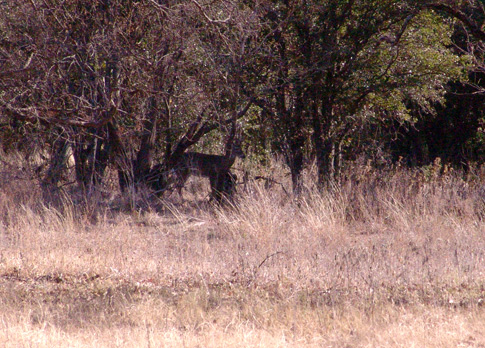 Oh yea, not seeing any does around he melted back into the trees. Wonder how many of those hide and look bucks I miss?

After the morning hunt I checked the Scrape Watch cameras. Nothing. So I pulled both cameras, I have other places to put them.

Then I went to the Point. There was work to do there. The floor to my Double Bull In The Sky had rotted in places. The plywood board replacement and the cedar tree’s limbs wrestled me hard but I eventually got it in the little clump of cedar trees. (The platform is neck high.) Then I put a Double Bull ground blind on the platform — another wrestling match.

This is the Double Bull In The Sky. 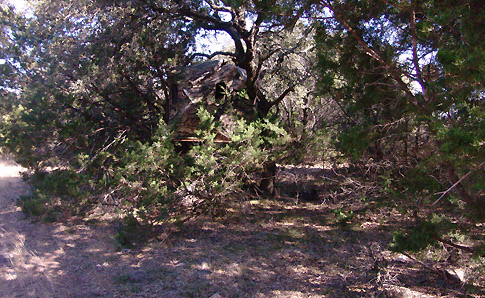 Here is a close up. 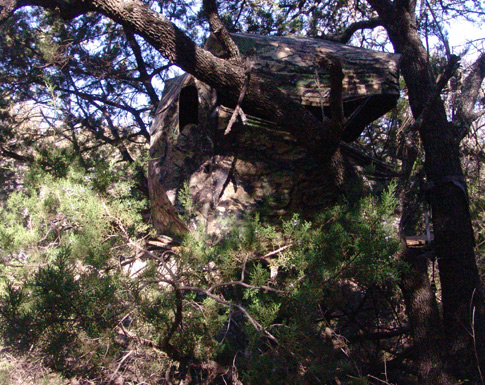 Lastly, I set up the Moultrie game camera to see what’s going on here.

AFTERNOON HUNT
Spotted a buck’s antlers move in the trees where the buck checked the area this morning. I glassed it and saw it was Freak 3. 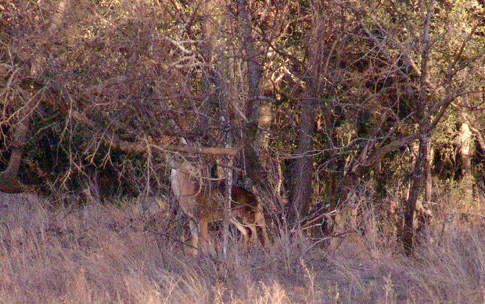 After a few minutes of surveillance Freak 3 started walking my way. 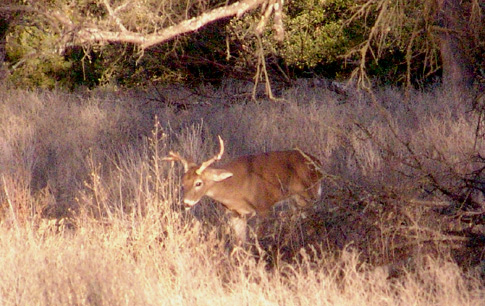 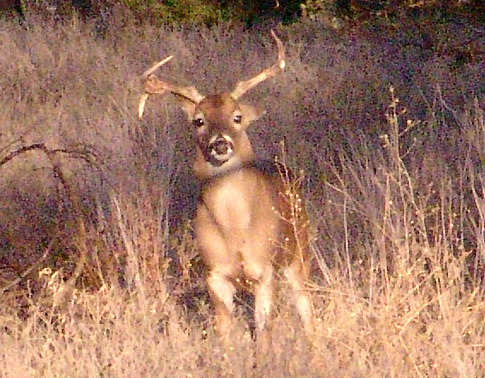 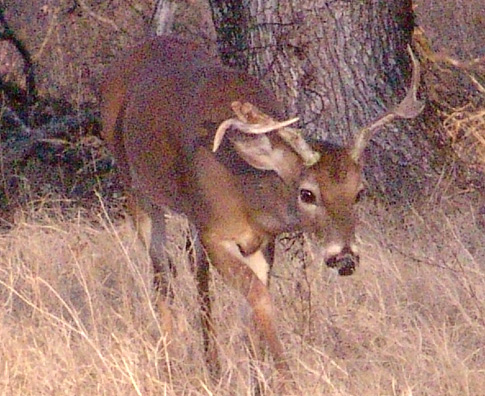 Freak 3 continued on his way. He went up the hill and out of sight.

Later 2 does came from the north and one from the gulch. Lately the afternoons deer movement has been slow.