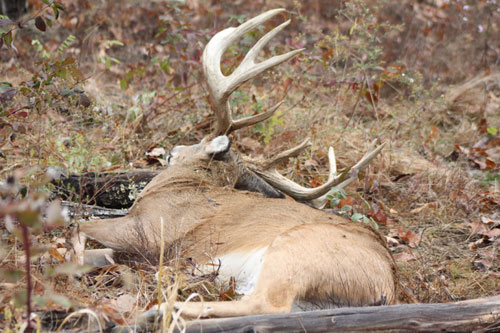 the Barnett with the TruFire SwitchBlade did its job.

Before collapsing into bed that night, Dr. Jimmy Steger who was there bowhunting and filming for his TV show (TeamMTW) on the Pursuit channel, showed me some video he had taken that same day at a long distance of a magnificent main frame eight point and I knew right there that was the buck for me. He was wide, heavy, tall and long, a perfect specimen and not far from where Andrew had killed his buck so I dreamt of him all night.

The next morning couldn’t come soon enough but finally dawn broke. I couldn’t wait to get out of bed, chow down some breakfast and hit the woods after that 8-point. We decided to sit a field house that was tight to where the monster buck was seen leaving the evening before. We sat from 7 am till nearly 10 in hopes of seeing the eight point emerge. We had all type of activity around us with numerous fantastic bucks coming into view and shooting range, but not the huge 8 I was intent of taking.

Just by chance, from the field house, we could see the steep, brushy and thickly wooded slope of the opposing hollow. While scanning it, Andrew actually spotted my wishful buck bedded down half way up the steep side about 250 yards away. If, as on queue, he stood up and began to feed across the thick hillside again on a protected trail away from us. Down we went from the field house across the top of the ridgeline, circling in front of his intended path. Kevin’s knowledge of the specific terrain was invaluable.

We found a relatively open area with a large tree that had fallen down across the slope above the worn trail that wound its way through a patch of briars. Kevin and Andrew went further ahead to another vantage point where he could signal me when the buck was spotted on his way in. I had a perfect set up and rest. The Barnett Buck Commander was resting on the fallen trunk, cocked and loaded with the Switchblade Speed Tip broad head ready wreak havoc again.

I saw out of the corner of my eye Andrew and Kevin get excited so I knew before the signal that my dream buck was on the way. I tried not to look at his unbelievably massive rack as he entered my sight. He stopped just on the edge of the briar patch offering me a shot. I took what I had, although the shot was a little high he dropped in his tracks. The awesome speed and kinetic energy of the Barnett crossbow just stopped him right where he stood. I couldn’t believe that he was down. Kevin and Andrew were jumping up and down.

After a few moments, I slowly made my way down to him but he was already done from a devastating spinal shot. Andrew came in to see him while Kevin continued to film the whole event. We were speechless and just in awe of what lay in front of us. He was just plain huge.

After taking in what just happened we began the picture taking and made plans to get him out of the hollow. Before we had finished, Kevin had called Dr. Jimmy Steger and let him know that the monarch was down. He quickly joined us and photographed the buck as well for his show. Back at the lodge, before preparing the meat, we measured him out to 197 2/8 with 11 inches of non typical inches which left a main frame 186 inch 8 point.

The whole experience couldn’t have been better for Andrew and me. The great folks of Kentucky Antler Company’s Bear Creek Lodge and especially Kevin Reece where gracious, knowledgeable and friendly hosts. The accommodations, food, property and monstrous game were just exceptional. They are there to help you as much or little as you want and do everything possible for you to be successful regardless of which weapon you choose to pursue your trophy with. With all the terrible airline hassles, delays and costs these days, this destination certainly has a big edge over going to Canada to pursue huge whitetails.

We also have to thank Barnett Crossbows and TruFire for their fantastic products. The Buck Commander is a smoking fast, powerful and accurate weapon as attested to by me and my 12 year old, Andrew who shot groups at 80 yards replicating mine. I still feel the need to mention my amazement of the Ballistic Target. It is the best target I have ever shot arrows into and really makes practicing a pleasure not a chore.

The drive home the following day, with those big racks in the truck made it easy especially since we knew we had found a new home to look forward to coming back to next year for another monster whitetail hunt. Not to mention, the rut back home in South Carolina was on and we had a lot of hunting left to do.