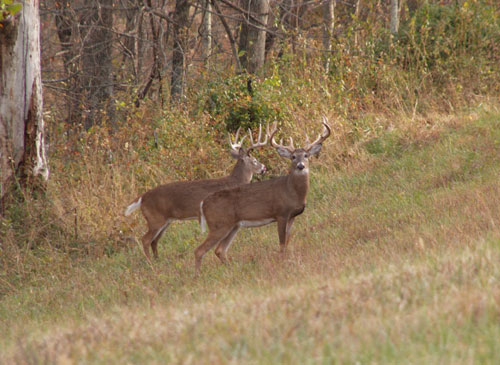 
We, Dr. Paul Plante of the Hunt Doctors and my 13 year old son Andrew left Blythewood, S.C. around 6:30 am. We were highway bound for Bear Creek Lodge owned by Kentucky Antler Company and some serious whitetail hunting. We basically drove north all the way up I-77 thru North Carolina, Virginia, West Virginia and into Kentucky before heading west on I-64 to reach our destination of Dash, Kentucky for a total of seven hours. What a nice, pleasant, easy and scenic drive through all the mountains.

We arrived at 1:30 at a huge tucked away wooden lodge deep in an oak hollow surrounded by ponds and heavy timber and were met graciously by our hosts, Kevin Reece and June who helped us get settled in and unpacked before heading out into the field for an evening hunt. Prior to leaving, Andrew and I checked the Barnett Buck Commander crossbow and it continued to shoot 5 inch groups at 80 yards just like at home. The TruFire Speed Tips recommended by Dr. Jimmy Steger of Team MTW flew just like field points. What a pleasure the whole set up is to shoot.

Interestingly, Bear Creek Lodge had a host of targets that we had never heard of or seen before. They were Ballistic Targets and I was amazed. Back at home these same arrows penetrated all my targets either all the way through or buried the arrows up past the fletchings. These targets stopped the arrows dead after a few inches of penetration but honestly, I could remove them every time with two fingers unlike similar claims from other companies.

We proceeded over to Bear Creek were we concentrated on a long undulating heavily planted ridge top which ran for nearly 1 1/2 miles and dropped off into very deep, steep and heavily timbered hollows on both sides that were loaded with mature hardwoods. Massive white and red oak acorns littered the ground every place we stepped into the timber. Strategically located feeders, ground blinds, tower stands, buddy stands, bow stands and field houses abounded everywhere as were the deer sightings as we made our way in.

We settled into a ground blind at the very end of the ridgeline that extended out like a small thin finger covered with hardwoods and experienced an amazing array of deer activity that evening right up till dark. Everything from small bucks to truly awe inspiring deer were seen. It was literally overwhelming and we could have easily taken a grand buck the first night but decided to hold off and just watch the show. Sparing, full blown fights with points breaking, scrapes been made, trees being rubbed, licking branches being tended to and all types of dominance posturing was viewed in that single evening sit. Good pictures were taken and a lot of heart racing was felt before we sneaked out of there after dark and took the Ranger UTV back down to the truck and then back to the lodge for a great meal and good fellowship. Throw in the pool table and laser shot game and they worked hard to keep Andrew and I busy most of the night. 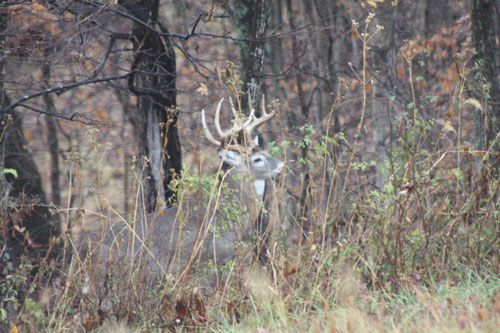 The next morning came early at 5 am when we arose for a quick breakfast before we left for the same property which was about a 15 minute drive from the lodge. No reason to go anywhere else, so back to the same stand site except this time Andrew and Kevin got up into the bow stands and I went to the ground blind. That was in order to try to get different camera views of Andrew’s hopeful shot on a buck he decided the night before he wanted to take. It was a beautiful typical nine point with long tines, stickers, mass and his most important character a drop tine which Andrew has always drooled over. 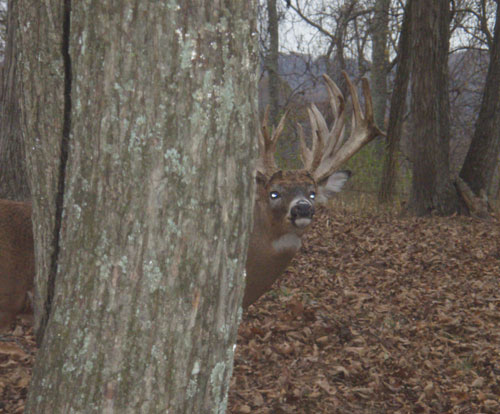 Accordingly, we saw at least a dozen shooter bucks but not the one he had his heart set on so he passed. We sat till 11 am and made our way quietly back out to get some lunch. The weather that morning was heavily overcast and in the 40’s and turned to a steady drizzling rain by early afternoon.

Huge bucks were everywhere. But not THE Buck.

That evening on Wednesday, November 3rd, as we entered the property, we spotted two bucks way off in the distance just over a grassy knoll. A slow stalk over there revealed them to be very nice bucks but again, not the one Andrew was after. We belly crawled in the wet vegetation over the crest to see the whole hill side and there was Andrew’s nine point bedded out in the open in the rain in a perfectly unapproachable, unstalkable location.

Not able to do anything, we laid there in the rain and watched till he finally got up and followed the other bucks out of the field into the dense timber leading into a steep hollow. Kevin said he knew the path they would most likely take and if we got ahead of them Andrew and I could set up above the path down wind and get a 25 yard shot. So we quickly backed up, got out of sight and rounded the whole hill top to the area that Kevin had thought would work.
Andrew and I made it down to the field edge till we found a good spot to set up overlooking the heavily worn path 22 yards below.

We set up on the edge of the tall grass as our backdrop and between some heavy timber to block our side views. It was perfect and the wind was in our faces. Minutes seemed to drag by as I leaned back and up to see if I could catch a glimpse of the deer. There was the monster bucks were on the exact trail we wanted with Andrew’s deer third in line.

I whispered to Kevin to get ready. He brought the Barnett Buck Commander up on his knee and focused on the shooting lane when a big clean 170 inch ten point stepped out and stopped perfectly in front of us. He sensed something was wrong but never figured it out so after a few tense heart pounding moments he continued on his way. Next came a nice smaller eight point. Then a moment later, Andrew’s dream buck came into view but he stopped behind a clump of dog fennels offering no shot. He also seemed to know something was up but again had no idea. He took a few steps out into the shooting lane and Andrew stopped him with a grunt and then the unmistakable sound of that Barnett crossbow followed by an instantaneous thud and the nine point bolted out of sight. 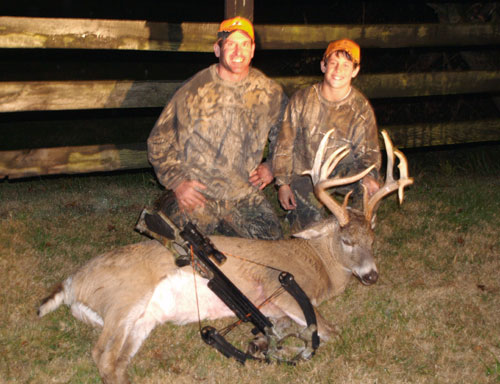 Young bowhunter Kevin with his drop tine trophy, his Barnett Buck Commander and one proud Dad.

The arrow tipped with the TruFire Switchblade Speed Tip blew right through the animal and buried deeply into a fallen log 10 yards past where the deer stood. I followed him with the camera as he went out of sight down into the hollow. He teetered a bit before vanishing so we gave him a while instead of pushing him although Andrew felt very confident of the shot.

After a hard to do wait and some intense tracking in the steady rain which left only the remains of the blood trail Andrew located his buck nearly 300 yards away. We were dumbfounded as the shot was later found to be a perfect right behind the shoulder, through and through shot with a huge entrance and exit hole created by the Switchblade Speed Tip broad head. Later, while cleaning the deer we found the top of the heart and both bottom lobes of the lung had been hit. How he went that far is a mystery. Either way, Andrew had his trophy and was elated. His biggest buck to date weighed in at near 230 pounds and scored 157 2/8.

All that followed was the hard but joyful work of getting him out of that hollow. No easy chore but we got it done as darkness descended on us. Back at the lodge we took a rain soaked picture session, cleaned him, got some much needed dinner and flopped into bed at mid night exhausted but happy, Andrew had his dream buck. Now it was my turn. 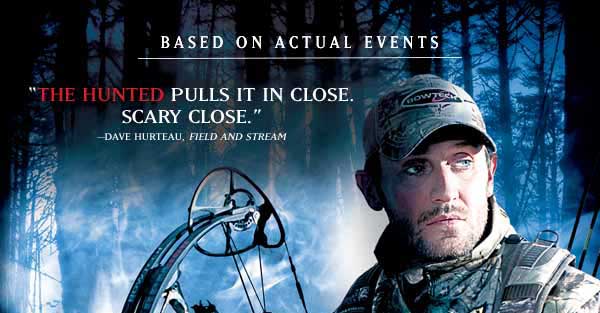 The Fan for Big Gobblers