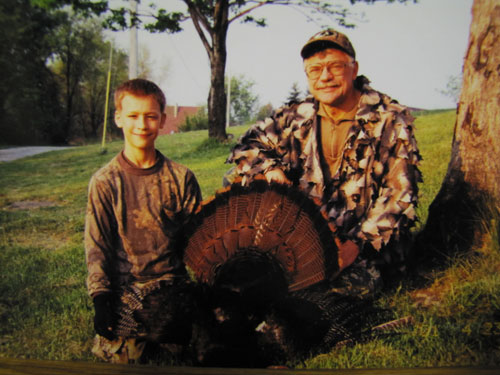 The Gobbler was about the tenth one we'd set up on that season. The wait and work made Cory's big day even bigger.

Log of Fame
Sitting above me on my desk where I do my writing is a curious log. It is a White Cedar log about as big and long as your forearm. I cut it in Minnesota during one of my filming trips. When I got it home I gave it to my youngest son Cory who is a lot like me. The log had no value.

Although all of my kids adventure and hunt he’s the one where the infection got out of control. We knew we were in trouble when we’d put the kids to bed and an hour later I’d see a dim light shining from under his closed door. I’d slip up to the door and swing it open to find him under the covers studying a Cabela’s catalog with a flashlight. We knew he was terminally infected when I noticed a dozen or more yellow post-it notes flagging special pages. He’s been a real trip.

I endeavor to do parenting right. I admit I’m not perfect so don’t think I’m talking down here. Among all of my mistakes I think I have done one thing right. The unfair part about raising kids is that it’s all OJT. Add that to the fact that we usually get them when we are young and stupid. The one truth that I now know is that investment matters.

I’m one lucky knuckle-dragger. I had a number of men invest in me along the trail, namely my dad, a scoutmaster, an Indian missionary in Alaska and a bunch of real Alaskan men. I don’t mean they put bucks in my savings account but they invested their most valuable possession into me…time. This investment helped shape who I am today. It helped shape my vocation as a professional outdoorsman and as a dad.

It all started one day when I was 5 and was diagnosed with activity induced asthma. My dad decided that I may need to have some alternatives to playing football or baseball so he got me interested in fishing. The important part here is that my dad had not fished a day in his life but he decided to invest in me. He did. Pretty soon I couldn’t think of anything else. After all, fishing and kids go together like broadheads and arrows.

I remember that the best part of the fishing adventure was that you got to out in the yard at night with dad and flashlights catching night crawlers before every fishing trip. Heck, I rained havoc on those crawlers and caught them almost every night all summer long. I’d hose down the grass and amp up  the worm hunting or go out during rainy nights and get soaked catching those slimy buggers.  We made a worm box out of an old refrigerator, buried it and filled it with dirt and shredded newspapers. It was hunting to me, sort of like jack lighting snakes. I was in my glory.

Plus I learned to fish. Most of those poor bluegills and bullheads had to come home in a galvanized bucket and live out the summer in a big tub out in the back yard. I’d tend to them (feed them night crawlers) and show them to everyone who came over. Before long I had a bunch of fishing buddies. My dad was the only dad in the neighborhood who would take us down to the river or over to Twin Lakes fishing. He was investing.

I brought home that cedar log from MN thinking that we’d burn it in a campfire and I’d tell some stories about my time in the Minnesota wilderness… but Cory had a novel idea. He came up with it all by himself. At this time in his life he was just getting into shooting things with feathers. Unknown to me he’d been saving “trophy” feathers in one of his drawers. He’d first shot a blue jay in the back yard with a BB gun,  without shooting out his eye, by the way! Next a few sparrows and then he found a couple crow feathers back in the pines he thought were special and kept them.

Next I took him pheasant hunting down by our pond. He was too young to have a license but he sure was ready.  He wore an orange hat and vest, like dad…and carried his 25 pound bow and a field point arrow in his hand. He walked behind me and sure enough a cock bird flushed with those big wispy colorful tail feathers trailing behind his cackle and I busted him with a load of sixes. He crumpled into the goldenrod stems and was still wiggling when we found him. With overflowing excitement Cory asked, “Can I finish him dad?” “Sure”, I said, “he’s all yours”. Cory nailed him with the field point as the bird checked out and then asked to carry him home to show mom. He was so proud. We ate that bird and Cory kept a feather. Then one day he and his bird dog puppy scored on another unlucky pheasant, his first. More feathers.

A little later after Cory was old enough to hunt we set up on a cranky old gobbler over at the Latimer farm and called him into 30 yards. Cory dusted him and it was a highlight of his life. He saved a feather that the #4 shot clipped out of the fan plus a primary wing feather. Then one day my buddy Grinny took us all hunting Canada geese. Cory got one that day and another feather got plucked. They went into his bottom drawer.

Well, that cedar log got put to use one day not long after the gobbler went down.  Cory invented the “Log of Fame”. He asked me to help him modify it with a row of holes drilled along the top side, then we attached a piece of twine to either end so the log hung on a nail as if suspended from a limp tawny bowstring

Next he went up to his drawer and retrieved all of those old feathers he’d been saving for years. He placed each one into holes in the Log of Fame until it bristled with memories. . The feathers stood proudly in the log like exclamation points of time with dad.

I suggested we hang it in my office with my trophies. That made him smile and it made me even prouder of him. I was investing. I’ve since moved it from the wall to the mantle above my writing desk where I see it every day.

It seems we learn best by experience. I have passed that investing on to my three kids. Among other things they all share a personal relationship with Christ and it’s an important part of the balance in my family. We have also invested far and wide. We’ve done wild and crazy things together all over the globe.

I have raised three bowhunters. My kids have caught salmon with me in Alaska rivers since they were smaller than the fish we catch. They have hauled big halibut up over the side of my Zodiac out in Alaska’s Cook Inlet and they have caught hand-sized bluegills off of the dock in Chautauqua Lake in NY. We’ve tracked lions with Bushman trackers in Botswana’s Kalahari Desert and they have heard lions roar from their sleeping bags. They have put hands on the horn with me as we captured 4000 pound bull rhinos and kayaked hundreds of miles of arctic rivers beside me. We’ve enjoyed hundreds of campfires and we began that adventure by doing 30 days in a tent one summer in the back pasture on my farm when they were wearing PJ’s with feet in them. It was a an investment that the collapse of Wall Street couldn’t touch.

About 10 weeks ago we buried my dad. He was 87. Before we closed the casket I whispered, “Thanks for taking me fishing dad”. Yep, investing is expensive if you invest valuable things like time. The most valuable thing you have to give from a kids point of view isn’t a quad or a Xbox. Those things don’t make memories… they grease your guilty conscience. Only time and campfires  are real investments. Christmas is coming, what are you getting your kids this year?