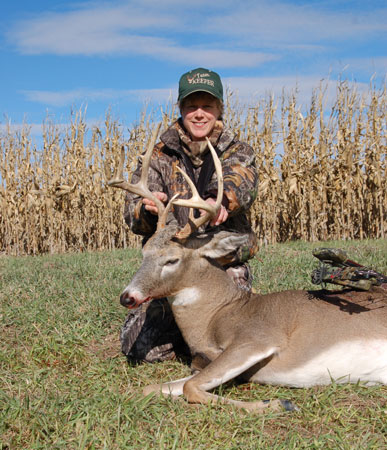 Scoring on a Nebraska buck is only possible if you understand where human scent comes from and how to manage it.

This morning I learned that US students rank 20th in worldwide competition in science and math. We are pathetic when it comes to science. Countries like South Korea, Finland and China smoked our students in side by side testing. I see this same dumb science reflected in our hunting industry. You use words like “molecule” or “molecular level” and the average guy in a camo hat is blown away by the “deep science”.

The scent trail that we leave as we travel is nothing more scientific than a trail of shed (exfoliated) skin cells that fall to the ground and lay there giving off odor. They smell because the bacteria is still actively eating the cells and giving off the byproduct of their activity…human odor. Deer and other animals can smell and easily identify this odor as trouble in the form of humans. So if that’s all there is to this smoky human scent dilemma what is all this confusion about how to address it.

Literally tank car loads of something in bottles is sprayed on hunters clothing every season by well intentioned hunters who saw someone on TV doing the same thing. It is the monkey see monkey do story. The big lie is that spraying your clothes, pack and bow with some magic juice will eliminate the deer’s ability to smell you. As if deer are afraid of clothes or packs. Daaa… they are afraid only of humans and specifically bowhunters who invade their space.

So what is the truth about human scent. There is only one way to address the human scent issue. Address the real problem. The real issue occurs at skin level. These epidermal cells are sloughed off by the millions daily by the action of abrasion when your clothes rub against your skin. They are intentionally laced with human specific bacteria. One recent publication stated that, “The human body contains 10 times as many bacterial cells as it does human cells. Biologists have now taken a census of the bacteria that live on our skin, and it turns out that the diversity of life there is quite remarkable. The bacteria between our eyebrows are different from those on the elbow or in some other nook or cranny. The bacteria are part of genuine ecosystems — akin to life on the Savannah, the ocean or the rich life of a tropical rain forest”.

This means that it is way more complex than a “scent molecule”. As a matter of fact I have been teaching for two decades that human scent is not general, it is specific. By that I mean that in the same way that a Blood Hound can track you through a crowd if he is first imprinted with your scent. Your scent is just like a fingerprint. It is uniquely YOU. The researcher below came to the same conclusion.

Dr. Martin Blaser of New York University has been working to identify the various bacteria that live on the human skin and help to form a protective barrier on the outside. Before he started his research it was estimated that fewer than 100 different species of bacteria lived on the skin. Using relatively new DNA-based sequencing techniques, he and his colleagues attempted to identify the bacterial species on the forearms of healthy subjects.

An initial study of six subjects identified 182 bacterial species. Subsequent studies continued to add more species to the point where Dr. Blaser now estimates the number of different bacteria species living on the skin could approach 500.
Despite these numbers Blaser notes that only about 10 species predominate, accounting for approximately 50% of the total population.

“What was interesting about some of the other species with smaller populations is that they were host specific. We could only identify them on a single host. It is entirely possible that everyone could have a unique bacterial signature,” says Blaser, much in the same way everyone has a unique DNA signature or a unique fingerprint.
What this translates into is that we each have a unique smell as the skin bacteria eats our skin cells, a signature smell.

So how can we influence this fact of human odor? First of all a total elimination of human scent is unlikely. What we can do is knock down the bacteria count by applying a bactericide or bacteria poison. We call these potions anti-bacteria soaps or solutions.

The other thing we can so is remove surface skin cells that are ready to fall off. You know we lose our entire epidermis every 28 days. That’s billions of skin cells. Abrasion will do this job for you which can be as easy as wearing a specially designed exfoliation glove to scrub with when we take a shower. You can get one at any Dollar Store or at a girly bath store. I use Atsko’s Hair and Body Soap to wash with because it is an engineered soap that rinses residue free.

Next you can spray your body down after a shower with a anti-bacterial spray. I use Atsko’s N-O-DOR Spray and I spray down with it after I turn off the shower and before toweling off. N-O-DOR is uniquely activated before use by adding an oxidizing powder to the bottle prior to use. Oxidation is nature’s way of destroying organic odors. It also contains an anti-bacterial agent that hammers the skin bacteria.

Now you’ve done the best you can for suppressing skin bacteria. Next you can wash your hunting clothes in Sport-Wash that completely removes smelly detergent residue and rinses completely out. Sport-Wash is the only engineered detergent in our industry.

For more go to: ATSKO

Concerns of the Disabled or Aging Bowhunter

Aging Whitetails on the Hoof