Scrape Watch: What It Means 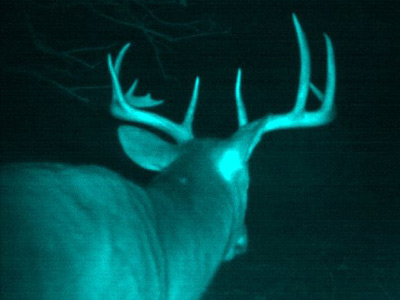 Pictures from my wireless camera show what’s going on right now. First, the pictures stopped coming. Nada. Until December 4th at 4:45 in the morning when a buck came in and worked the scrape. In the first hour of daylight 2 does jot bumped out of the area and a Spike buck stopped in front of the camera and got his wireless picture taken, courtesy of BuckEye Cam.

Minutes after 7:00 an 8-point buck shows up and rakes an overhead branches with his antlers before working the scrape. Five minutes later the Spike returns.

Then, BINGO, at 6:17 in the morning of December 6 a mature, wide  9-point sticks his head in front of the camera gives us a fine picture of his head and shoulders. And then we see him work the scrape. This buck is a big, fat, a real pig.

Actually, in my opinion, the does are the most important pics. Particularly the one with the doe in the scrape. Simply put, does working the scrape brings in the bucks to the scrape area.

And the picture of the biggest buck? That means we have another mature buck in our area. If he shows up where I am he’s gonna get an archery lesson.

So You Want To Be a Ghost