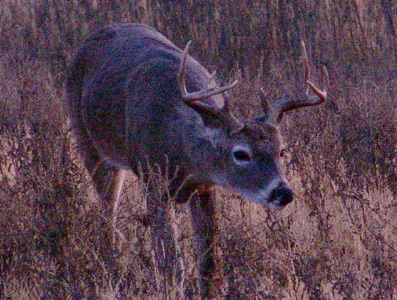 Kinda sleepy this morning. Staring at the coffee brewing. Yesterday I saw a big boy and wouldn’t sleep in today for nothing.

Busy morning. But not at such a frantic pace. Waiting in the dark I heard the cracks and clicks of antlers. Even with the Nikons on the sound I couldn’t see the fight. It lasted quite a while. Very soon a deer shaped shadow came from the sound. It walked stiff legged across the food plot.

Every second there was slightly better light. This buck had a big body and I could make things out with the binocs now. Fat boy’s rack was heavy but had short tines. The buck that came up behind him had a much bigger rack. It was still to dark to shot.

They stood 5 yards apart and did not look at each other. Until … the first buck lunged at the big rack and ran him off. Soon the first buck returned. A button buck walked around me from the right and went to the buck. He was looking toward the hill. We both saw a big doe there. The buck stiff legged in her direction. Daylight was slowly improving.

The doe hurried back to some trees. Ol’ stiff leg urinated on the ground … And went for her. She ran into the gulch. Hot on her trail he abruptly halted and smelt the ground. He adjusted his course further to his right and followed his nose.

The doe came out of the gulch. Another buck came up in front of me and suddenly bolted. But he didn’t leave — as you know it’s just how they do sometimes. He made a slow circle in the weeds around the food plot area. 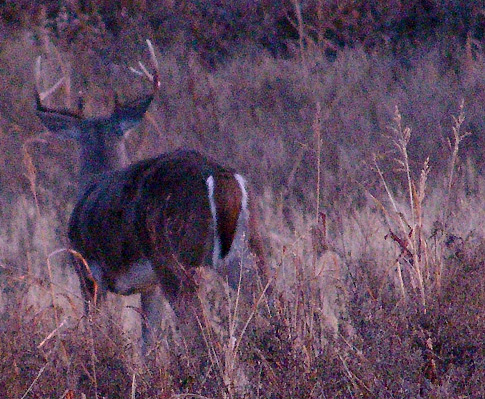 When 3 does walked around my blind he stuck his head and neck out and chased them all over. 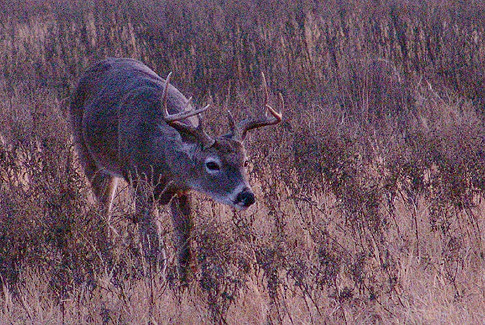 As time passed a dozen or so does came through the area. Once two does went where the buck had urinated earlier and smelled the ground. The two does had a quick conflict and one doe backed away. Then they both waited there for 15 – 20 minutes. During that time they both perfumed up the immediate area.

Living in the country you see some totally wild cats. Most mornings here I’ve seen a big orange and white cat come through on the woods edge of the gulch. Just now 4 does came up by me. Something attracted their attention and 2 deer very cautiously moved towards whatever they saw…

It was the orange and white cat. As it watched the deer getting closer, and as a veteran of many hard won skirmishes I imagine the cat was thinking, “heck just one of these fools and I won’t have to eat field mice for weeks.” And then…

One of the does struck out at the cat. Now I’m sure the cat was thinking, “I’m outa here.” The other two does joined the chase. The cat cut a zig zag course or the deer would have caught it. Then the cat did what the deer couldn’t do, it jumped up on a dead fall tree and watched his attackers from above their heads. I’ll bet this cat won’t let deer walk up to him again!