by Larry Arrington
in Bowhunting Posts
0 0
A A
0 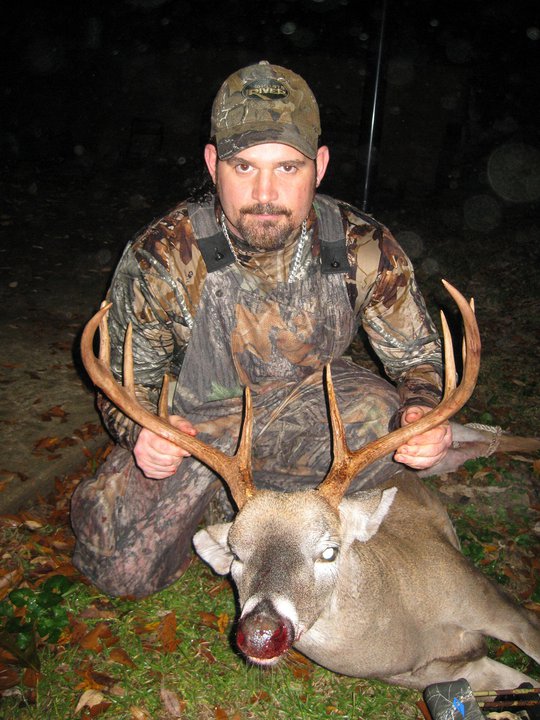 It was the day before Thanksgiving, and at around 2:30pm. I was the about the only person left at the office. Something in my gut told me to take off and sneak in a last-minute afternoon hunt at my favorite little bow-hunting spot! So, I went home, grabbed my 10-year-old son and headed out.

We walked up on a young 6-pointer grazing in one of my green fields, so I felt it was going to be a decent hunt. Then while we were climbing up the stick-ladder to our two lock-on’s, we jumped another 4-pointer. I wasn’t sure we would see anything else after that because it was already around 3:45pm at that point, and the sun was due to set at 4:21pm.

Christian and I sat for the next 45 minutes and didn’t see a thing, so my son was getting antsy and said, “Dad I’m hungry…” Fatal words to a father bow hunting right at dusk! So, I whispered to him, “Son right at dark is the best time to see an old buck.” He reluctantly resolved to stay in the tree for a few more minutes.

That’s when I saw the flash of white move through the trees! It was a decent buck about 70 yards out and slowly heading our way. I tapped my son on the shoulder and pointed, but he couldn’t see him yet.

After about 5 minutes of meandering, the old buck got close enough for my son to actually get a good look at him through the trees. He was an old silver-faced 10-pointer! I could see my son’s heart pounding through the camo jacket he had on, and my was starting to race as well.

I thought all might be lost when the buck crossed the path that we had taken in and got a wiff of our sent on the trail. He froze and started nervously looking around. I said a little prayer and the buck started moving slowly into the edge of our little green patch of wheat and winter oats.

I knew the old buck wouldn’t stick around long, so I drew my bow back and tried to get him in my sights as he moved closer to the clearing. I could barely see through my peep due to the lowering light levels, so released right as he walked out from under the small brush trees. It was a hit, albeit the shot landed a little bit higher than I wanted.

He turned around and bolted back in the direction he had come from! We could hear him run for about 8-10 seconds, and then there was the old familiar “crash” through the leaves! My son said, “Dad did you hear him crash?” As I tried to regain my breath I joyously said, “YES!!!”

We gave him a few minutes to ensure he bled out and then we excitedly climbed down out of the tree and went over to where the hit took place. There was no blood in the shot area, but about 10 yards away a thick blood trail ensured. So, I handed my son the flashlight and told him to track it down.

It took us around 15 minutes (which felt more like an hour) to locate the buck who had run about 75 yards into the thick woods before expiring.

We said a little prayer of thanks, and my son said, “I guess this was God’s way of rewarding you for fasting?” He was right, because this was the first time I had hunted in more than 3 weeks, because my church had been on a 21-day fast, and hunting was one of the things I had given up during that time! For an avid bow hunter like me, giving up hunting in the middle of bow season seemed INSANE, but I felt God telling me to do it so.

So, this year we have a little something extra to be thankful for!