by Steve Banovic
in Bowhunting Posts
0 0
A A
1 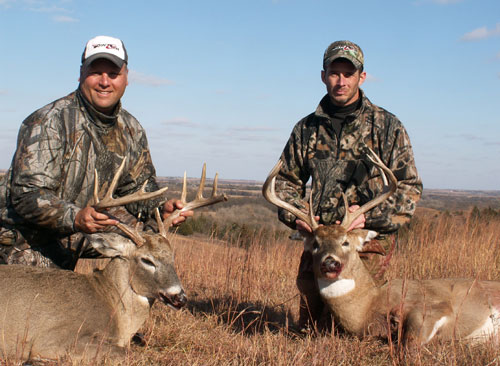 Steve and friend Cory, one year to the day, minutes apart with father Jerry watching from above, celebrate their anniversary bucks.

Some of you may recall last season I wrote about a bow hunt to my south central location in the Corn Husker state with my good friend Cory Yost from Michigan. On that 6 day archery hunt both Cory and I were blessed with harvesting magnificent P&Y bucks on the same day (November 9th) with-in hours of one another.

Cory’s dad (Jerry) who passed away short of a month of my first introduction with Cory 7 plus years ago would be watching over us in spirit during our archery adventure as the 2009 hunt would turn out to be one of the most unforgettable memories of my hunting career. With all of the excitement that we both shared I made a commitment to once again meet Cory in 2010 at our Nebraska location. Believing that miracle do come to those who truly believe; I would have never been able to script the future events in the following year on November 9th of 2010.

Living in Arizona I found myself counting the days till I once again was hunting the cooler temperatures of the Midwest. Early forecast was 40’s for lows and highs in the mid 70’s. Just my luck, warmer temperatures again with early and late in the day Rut action. If I could make it to a tree prior to sun rise I would then add to the hours spent on stand increasing my odds.

Arriving at 5:00am after a 15 1/2 hour non stop 15 1/2 hour non-stop drive, which I attribute to the use of my Gum-O-Flage Alert, I elevated a stand in one of my favorite drainage’s. I soon realized the Rut was much slower then normal on this day so meeting Cory at noon would be the plan for the afternoon instead of the all day duration I normally employ.

Days in the stand would pass but no sign of any mature bucks due to the unseasonable warm weather. A few smaller bucks had the does moving but the adult shooters were not moving during day light hours.

On the morning of the 8th I began a rattling sequence as soon as visibility allowed. To my amazement the first adult buck was on a string and closing the distance fast. The hair on this buck was all bristled up and his ears were pinned back in preparation for battle. I laid trust in my personal scent control with Dead Down Wind and Scent Lok clothing as he worked towards my stand position. This buck stopped directly down wind of my stand presenting me with a broadside 62 yd shot. Banking on this buck to close the distance even further I decided to hold off taking a long shot passing on this respectable 8 point. Minutes into this stand off he did not see his battler and walked off in the direction he originally came from. With my decision not to take a shot at this buck, it would prove fruitful for Cory during his time on stand the very next day.

November 9th we awoke to 40-50 mph winds and once again warm temperatures. The wind reduced all hearing and rattling no matter how hard I tried proved useless. The morning brought a year and a half 8 point buck chasing a doe, a spike and doe to the east and in unison a spike chasing a doe to the west of my stand. All three does crossed the exact same intersection during all the chasing so I felt it was time to consider relocating my stand. In the past I have noticed movement at this location and felt with the high winds it would be the opium time to reposition my stand.

Reviewing my watch it read 1:00pm and no movement for hours. I felt it was now the time to begin the removal of my stand from this observation perch and place it 70 yards closer to the intersection. The tree I needed to be located in was a tangled mess so cutting multiple large limbs was required just to allow a few shooting lanes. With sawing completed and limbs out of the way I then settled into my new location for the remainder of the day to find out if I would enjoy any afternoon movement.

At exactly 2:30pm I was able to hear faint steps in the dried leaves directly below my stand. Peering from my 30 foot platform I was able to confirm this was a buck and he had good beam lengths. Realizing that this was the largest buck of the week it was not difficult to automatically switch into auto pilot. Quietly removing my BowTech Destroyer off the bow hanger I slowly pivoted the bow over my chest to properly get into shooting position. I then snapped on my  release  readying myself for the up and coming shot. I drew  as he walked into my one and only shooting lane. I stopped the buck with a faint grunt from my mouth while settling into my anchor position. When he locked into his alert position I released the Victory V Force arrow hitting the tuff of hair I visibly marked prior to the shot.

The arrow passed completely through the body of this whitetail sticking the blood coated shaft into the ground. He then rodeo kicked his hind legs high into the air and sprinted out of site.

I contacted Cory and tried to explain with the use of poor phone signal the events that just unfolded. “I just shot my buck and it’s on the same day as last year.” Cory talking over me while I was telling him my story he was trying to explain that he had just shot his buck as well. This conversation went back and forth with who shot what and congratulations were poured out to both once the air was cleared.

Cory explained the deer he shot had similar characteristics as the wide white horned 8 point that I passed the day before and I needed to travel in his direction to enjoy yet another November blessing that we were both involved in.

November 9th is the same day that Cory and I shot our deer in the 2009 season and 2010 would be no different. 2:31pm Cory harvested the exact 8 point buck that I passed the day earlier. I then shot my 10 point at a distance of 13 yards at 2:32pm. If I had not passed on the 8 point the day before, two bucks would not have been laid out on the ground with-in a period of a single minute. 4 P&Y bucks on the same day, there is only one explanation, Jerry…..!

Thanks needs to go out to our father in heaven along with Jerry for involving me on the continuation with this November 9th blessing. How can anyone deny that Cory and I are not being watched over by Jerry? I am absolutely positive that I will be sharing more time on stand with the both of them on my future hunting trips. I owe this unbelievable miracle to the both of you. I would like to once again thank Cory for his true friendship and look forward to more future hunts together along with time in the field with Jerry.

November is my all time favorite month of the year and the 9th is by far the most unbelievable single date in that month. Any guesses as to what location I will be holding my BowTech come November 9th, 2011……….?