A Lesson in Predator Management

by Jana Waller
in Bowhunting Posts
0 0
A A
3 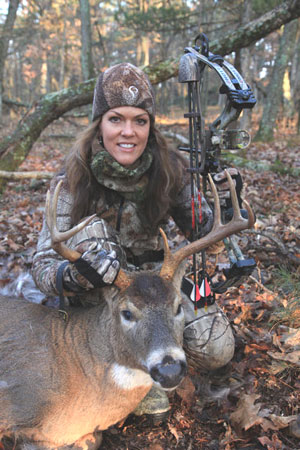 Happy to have recovered the buck, the author poses with her 2010 Wisconsin 8 pointer.

An intrusive buzzing interrupted my deep sleep as the green glow of the alarm clock filled the cabin’s dark bedroom. Mid November not only brings early mornings in Wisconsin, but it’s typically the heart of
the rut which will get any avid bowhunter’s heart pounding.

After surveying an aerial map of the property, my Dad and I along with 4 other hunting buddies, selected our stands and headed out agreeing to meet back at the cabin for lunch and a “deer report”.

Sitting on a small water hole on the north end of the woods, I felt confident that a big bruiser would come in for a much needed drink. Three long hours into the sit I spotted movement off to my left. I watched as an 8 pointer meandered through the downfalls, working his way towards my stand. The two year old buck needed another year’s growth so I wasn’t disappointed when he simply turned and slowly walked away from me, more interested in acorns then the water hole. Climbing down at noon, I was puzzled with the lack of action in the woods, but it turned out to be the consensus.

Three days of long, lonely sits left us all a bit bewildered. Where had all of the deer gone? It wasn’t uncommon to see over a dozen deer per sit just a couple of years ago. All of my hunting partners were reporting the same disheartening intel- the woods were very quiet this year.

After a hardy bowl of venison chili for lunch I headed to the south end of the property to sit in a spot we call the ‘hard-to-find’ stand, situated among some thick brush and oaks. Three long hours had passed with only one forked horn buck spotted. With 30 minutes of light remaining, I stood at the ready with my release clipped to the string. A slight crunch of leaves suddenly grabbed my attention. A brown body of a deer moved quickly through the thick brush as I pulled back my bow in case it was a buck.

Antlers appeared as the 8 pointer stepped into a small opening at 25 yards and I sent my arrow flying. My broadhead made a resounding thump, hitting the buck at a slightly quartering angle. The shot was a few inches back than I had intended, but I felt confident the shuttle T broadhead would do it’s job as the buck went crashing through the trees. I waited the standard 20 minutes until climbing down and rushing back to the cabin to share my exciting news.

After dinner we donned our headlamps and began the search. Entering the woods at 7:30pm, we shined the leaves and quickly found a great blood trail where the buck had crossed an opening. Excited about the sign, we followed the trail for an hour before it started to lessen. Coming across a huge downfall, we searched left and right but the trail seemed to vanish. Backing out of the woods, we decided to resume our search in the early morning.

In the bright morning light we were able to pick up the trail where we left off. Scanning the downfalls, my boyfriend Jim spotted the 8 pointer’s rack lying among the branches. “There he is!”, he shouted. Sprinting over the buck, my excitement quickly turned to disgust as I realized the coyotes found my buck before we did.

From the amount of destruction, it was obviously a pack of coyotes that dined on what was to be my year’s venison. Elated to have found the beautiful buck, I couldn’t help but also feel disappointed in the waste. The answer to our question “What happened to all the deer?” was evident.

Along with back to back harsh winters, it was likely we were losing a large number of fawns to coyotes and other predators that have gone unmanaged on our property.

Salvaging a portion of the backstraps, we fired up the grill that evening and enjoyed a wonderful venison dinner at the cabin. Raising our glasses in thanks for the harvest, we made plans for next month’s hunt- a hunt that included a coyote call and a 17HMR.