by Engee Potgieter
in Bowhunting Posts
0 0
A A
1 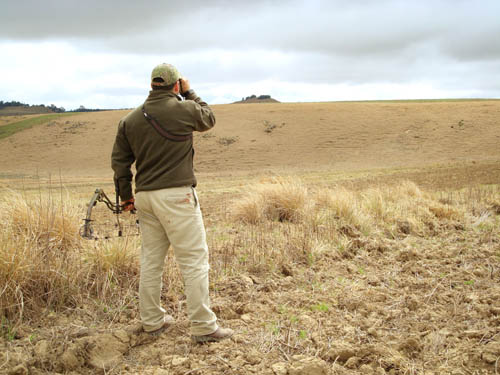 A good set of binoculars is a must as you will be scanning the area a lot.

I steadied my cold hands by resting my elbows on the front of the hunting vehicle while I kept my binoculars trained on the distant cluster of Reedbuck, one of which being the biggest ram I had ever laid eyes on and exactly the type of ram I had come so far to hunt.

This was my second trip to the picturesque Midlands region of Kwazulu Natal in search of a trophy Common Reedbuck, and thus far it has been every bit as difficult to spot and get within reasonable shooting distance of a significant ram as had been the case with my hunt the previous year. The seemingly endless rolling hills and sweeping valleys so common of the Natal Midlands make it incredibly challenging to get close enough to the otherwise rather abundant Reedbuck in order to take a shot with bow and arrow. On this particular trip I was very fortunate to spot an especially good ram on a distant hillside the first afternoon of my hunt and had spent every minute since then trying to figure out how I was going to get close enough.

Outsmarting a mature Reedbuck ram was one thing but I had to contend with a rather large group of females constantly with him. My first attempt had failed miserably when, just before I was close enough to take the shot, I was spotted by one of the ever vigilant females; her sharp whistle sending the whole group running. I was pushing my luck with the big ram and knew very well that each failed attempt at getting close to him would only serve to make him more wary and that he would not stand to be hassled for long. Experience had taught me that old rams such as this chap only give you a precious few chances before disappearing into thin air, something that was a very real possibility as the ram could easily be swallowed up by the immense open country I was hunting in.

Although fairly well distributed throughout South Africa, the relatively small stretch of the Midlands near the quaint little settlement which is Nottingham Road in Kwazulu Natal has always produced some of the most spectacular Common Reedbuck (Redunca arundinum) trophies in the entire country. Great genetics, the perfect habitat and very high numbers of these medium sized antelope makes this corner of South Africa one of the best kept secrets for those who are looking to take a record book trophy. Although tactics differ from each hunter, or outfitter, to the next the method that has worked well for me in the past is early morning scanning of likely looking valleys or areas where a big ram was spotted, as Common Reedbuck are very territorial, in hopes of not only spotting a sizable ram, but also one in an area that will enable you to get close enough to ensure an accurate shot with your bow, which for most bowhunters is under 50 yards.

Two things are absolutely essential for this type of hunting and which no bow hunter should be without, the first is a compact and accurate rangefinder, and the second is a pair of high quality binoculars. The reason for this is simple, firstly a rangefinder enables you to accurately measure the exact distance to the animal as guessing the yardage in open terrain can be very misleading. Secondly, a high power pair of binoculars do what human eyes simply cannot and as you will be spending many hours trying to pick out the tawny coloured Reedbuck amongst a sea of thatch grass, a superior pair of optics will enable you to spot the small tell tale signs that betray the presence of a ram. This often being just the tips of the horns protruding from the tall grass, as Reedbuck prefer spending the majority of the day lying up in marsh land, valley bottoms, maize fields or areas with sufficient cover, only to move from their bedding areas in the early mornings and late afternoons to feed.

Although most people will agree that the Common Reedbuck is an exclusive open plains specie, they do adapt well when introduced to relatively thick bushveld on game farms, but will however still seek out and congregate on the more open areas on the property, something to keep in mind when hunting them in areas which are generally outside their natural distribution range.

The second day of my hunt dawned cold as a gravediggers heart and I was hoping that I would be able to find the big ram again as I sat at the breakfast table listening to the ominous wind outside while stirring the warm cup of coffee in my hand. As I would discover later when I got to the property, the initial close contact with the ram the day before had caused him to move his group of females to a distant hill on the far side of the farm, and as I crested the plateau he immediately broke away from the company of the females and took off toward a distant maize field to seek refuge amongst it’s thick stand of Klitsgras that was now growing where tall maize once stood, although I was thankful that he was finally on his own and that there were no longer so many eyes on the lookout around him I could clearly see that he was very agitated and that I would have to make the most of what little chances I got.

I gave him about twenty minutes to settle down before slowly moving in the direction I had seen him go, only moving five yards at a time before scanning the ground ahead, this soon paid off as I spotted just the tops of his horns within the stalks of klitsgras. I immediately sunk to my knees and planned my route ahead, but I had just started moving forward when I felt the wind hit the back of my neck, two seconds later the ram burst from cover a mere 40yards ahead of me, only stopping briefly at about a hundred yards to look back over his shoulder before disappearing out of sight.

At that point I was sure that all was lost and that the ram was probably well on its way to some distant hideaway, feeling extremely frustrated I gathered my gear and headed back to the vehicle, which would at least provide some shelter against the miserable conditions, although I doubted that even the warm and snug cab would lift my mood.

Stay tuned: Part 2 will be on Bowhunting.Net soon.

Still Crazy In The Deer Woods

C'Mere Deer: Buy One Get One Free