by Engee Potgieter
in Bowhunting Posts
0 0
0 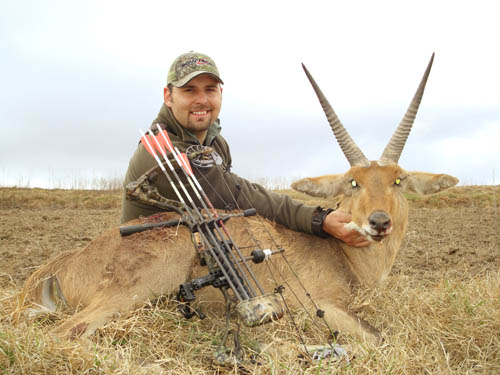 Author with his tropy Reedbuck. 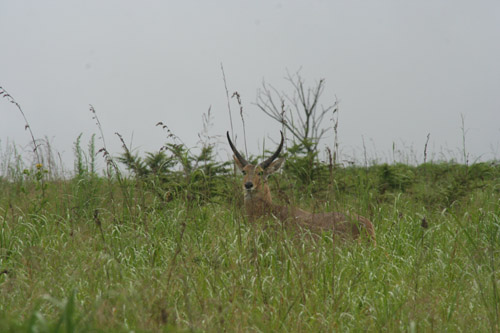 Much later I happened to glance at my watch and noticed that two hours had already passed since I had flushed the ram so I suggested to Evan, a local Professional Hunter who was accompanying me on the hunt and who knew the area like the back of his hand, that we take a slow drive along the boundary of the property, he agreed. My instinct told me that the ram would surely want to get out of the icy cold wind blowing from the nearby Drakensberg Mountains and that the only shelter I could think of in the direction he had run were the relatively high contour lines of the maize fields. I was grasping at straws but it was a better option than sitting around or admitting defeat.

We set off and my mood soon lifted when we started to see the first couple of Reedbuck, albeit sub adult rams and a few females, they were doing exactly what I had thought, lying down tight against the contour lines on the downwind side.

A couple hundred yards further along the substantial stretch of maize fields my spirits soared as we finally spotted the big chap. I did not need my binoculars to tell me that it was indeed him lying there two hundred yards away, already attentively staring in our direction as his tall horns stood out starkly against the winter grass. We immediately made a u turn and headed back to the top of the field and well out of view of the ram as not to make him any more nervous than he already was. I knew that this would truly be my final chance at shooting this trophy as the boundary of the property we were hunting on, a simple five strand cattle fence was only eighty or so yards below the ram position and if I bumped him now that I would definitely never see him again as I was sure that by now he had had enough of being pursued.

My plan was to slowly but surely make my way down to the unsuspecting ram, while constantly making sure that I kept the atrocious wind that was blowing across my front and almost directly toward the ram as far possible in my favour. I had also instructed Evan to give me about ten minutes before driving back along the road we had spotted the ram from; this would hopefully hold the ram’s attention as I tried to slip in within shooting range behind him.

Checking my bow one last time to ensure all was well I set off toward the unsuspecting Reedbuck, I gave the position where I reckoned the ram to be a wide berth should the wind suddenly change again, progress was slow due to the upturned earth in the rows where the maize had stood only a short time ago, but I was in no hurry, methodically placing each foot carefully while constantly scanning ahead to avoid bumping into other unseen Reedbuck on the way.

I soon found myself on the same contour the ram was hiding behind and judging from the plants and grass growing on the top of it I surmised that I should be between eighty and a hundred yards from where big ram was lying. This was it; I quietly took off my backpack, removed my boots and nocked an arrow, from here on I would close the remaining distance with only socks on my feet, gradually moving ahead while hugging the curve of the contour, stopping every few paces to scan ahead.

It soon became apparent though that due to the substantial grass and small bushes on the top of the contour that I would only see the ram when I was dangerously close to him, my pulse was racing as I moved closer still. I was about thirty yards away from a particularly high stand of grass when I finally saw the first sign of him, he was no doubt looking at Evan in the distant vehicle but both his ears were pointed back toward me, two things struck me immediately, the first was that there was a very small opening in the grass through which I could thread an arrow, but although I could see the big rams head and neck I could not yet see his body, which meant that I would have to move even closer to the ram which was already on high alert.

The slightest mistake now and it would be game over, any foreign sound, a carelessly placed foot or a glance back in my direction and the ram would be gone in a flash. Keeping as low as I possibly could and not daring to look up I moved even further into the rams comfort zone, after a dozen agonizingly slow paces I knelt and with my bow in my left hand and the rangefinder in my right I took a reading through the gap and right next to the ram, 18 short yards. I lowered the rangefinder and hooked on my release, smoothly drawing back I came to my feet and moved into the shooting lane.

I felt incredibly exposed as the huge rams body slowly came into view, I noticed that he was lying half on his side facing directly away from me, so I calmly settled my sights top pin just ahead of the kidneys and an inch to the right of the spine, a shot here would put my arrow straight into the vitals, I let out a half breath and confidently touched the trigger, the arrow flashed through the gap and came to a shuddering stop against the far shoulder, a perfect shot!

The mortally wounded ram was rocked sideways by the impact and stumbled as he got up. As he ran off toward the next contour relief swept over me as I realized that I finally had him, I had just arrowed the biggest Reedbuck I have ever seen.

Laying my bow down I had just lifted my binoculars to my eyes when I saw him kicking up dust. He was finally mine. Moments later as I knelt beside my trophy I was filled with sheer excitement and utter appreciation as I knew full well how lucky I was to have gotten so many chances at this stunning trophy, the third and last of which concluded with me shooting an incredible 15 5/8” Common Reedbuck with my bow. Third time lucky, as my Father used to say.

How to Shoot a Kudu