Diary of a Deer Hunt 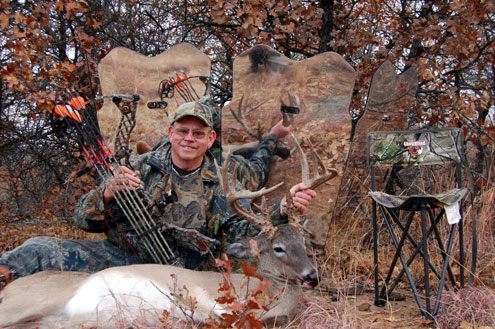 Listen to Outdoors with Luke Clayton at www.catfishradio.com

Regular readers of this spot know that I like to take you with me via the written word on my many outdoor adventures. I truly wish each and every one of you that love the outdoors could be ‘out there’ with me, especially on this late season hunt for a whitetail buck.

This week finds your outdoors scribe packed and ready for a late season archery buck hunt at Squaw Mountain Ranch, located in Jack County north of Jacksboro. Many ranches across the state partake in a Texas Parks and Wildlife management plan that allows the harvest of deer from the opener of bow season through the end of February. On a short bow hunt back in October at the ranch, I came close to getting a 20-yard shot at what the ranch manager Keith Wieser described as a management buck. The big-bodied buck sported a huge typical 4-point right antler and a heavy left antler with multiple points growing in every direction. He was the epitome of non typical and a buck that has caused me to lose more than a few hours sleep. My buddy Keith Barnett, who works and guides on the ranch just called and informed me that the big nontypical  was still roaming the property.

I’ll be packing my lap top and air card on this hunt. Your next word from me will come from the ranch tomorrow. Thanks to some understanding editors, I will be pushing deadline for this article but, I want it ‘fresh’ for you!

Monday noon – Arrived at Squaw Mountain Ranch and headed out through the hills with Barnett to set up my GhostBlinds near a couple of trails with lots of buck sign. In each location, we set the blinds about 20 yards from the trail, just inside a brush line. These mirror blinds reflect the exact image of what’s in front of them. We checked them both from twenty yards and had to look close to see them. Nothing is better than the reflection of Mother Nature when it comes to hiding from and getting really close to game. Then, back to camp for a quick lunch. Checked the Mathew’s Z7 sights, shot 3 arrows from 20 to 30 yards within a 2 inch circle. I’m ready for the afternoon hunt!

The afternoon hunt – While driving through the rugged ranch, we stopped and glassed a monster whitetail that would quicken the pulse of any trophy hunter. The buck sported 6 points on one side and 5 on the other. He would easily score over 160 inches BC. A couple months ago, a white tail that scored nearly 290 BC was harvested and numerous bucks at or over 170 BC are regularly each season. As we drove to the area we planned to hunt, we spotted several lesser bucks and numerous does, already up and feeding. Deer movement was good. Spirits were high as Barnett and I climbed behind our GhostBlinds and settled in for the hunt. It was nice having a camera man with me, especially one that knew the ranch like the back of his hand!

Baited the area around the trail with persimmon flavored Nac Attack, my favorite food attractant. Everything in the woods love persimmons and deer can smell the bait from a great distance.

Barnett brought his rattling horns and about an hour before dark, he began his first series of rattling. He’s observed bucks fighting as recently as two days prior and felt the antler rattling might be productive. He was right! I heard deer stepping on rocks as they made their way through the brush along the trail. First I saw antlers, BIG antlers then the blocky body of a mature whitetail buck that would score in the mid 140’s BC. He was followed by another buck that could have been his twin, same size body and heavy antler configuration.

The second buck stopped just inside some low hanging oak limbs at 35 yards and never presented the right angle for an ethical bow shot. He looked directly in my direction but never saw the GhostBlind, or me. The other buck kept walking and stopped just out of sight.  A big Axis buck eased down the trail and, in body language even we humans can decipher, let the whitetails know that the boss of the woods wanted right of way. The buck I was watching granted it quickly. As they say, ‘that’s hunting!’ Things look very promising for tomorrow’s morning hunt.  I plan to be in the same location well before sunup, with the rattling horns of course! Now for a good night’s sleep! I’ll update you after the morning hunt!

Noon Tuesday – Back at camp with buck hanging on the meat pole! Was behind the GhostBlind 30 minutes before sunup this morning. With a full moon, hoped to catch deer heading to their bedding areas after feeding all night. Sprinkled a liberal amount of Nac Attack attractant around the junction of the same two trails I hunted yesterday and settled in. Barnett was behind his GhostBlind with rattling horns. After a series of ‘tinkling’ the horns, heard movement back in the brush. A spike and young four-point showed up on the west trail, when they ascertained there was no real buck fight, they settled down and began eating the Nac Attack. Then, movement back in the brush.

A gnarly antlered buck appeared out of nowhere, stopped in the trail and presented a broadside shot at 22 yards. My Mathews Z7 zipped an arrow tipped with an Inverter Mechanical broad head his way. We gave the buck ten minutes and followed his trail 60 yards. Recovered him 60 yards from where he was arrowed. Back at camp, Barnett scored him as a non typical, just over 157 BC.

I’ve killed a lot of deer in my life, and many in Jack County but none that would come anywhere close to this one. With 19 scoreable points and antler bases that measured over 6 inches, he was a ‘war horse’ for sure.

I learn something new every time I venture forth into the whitetail woods. On this hunt, I learned that just because the peak of the rut is past, antler rattling can pay dividends, big dividends!

Save the Herd: Celebrate Coyote Week