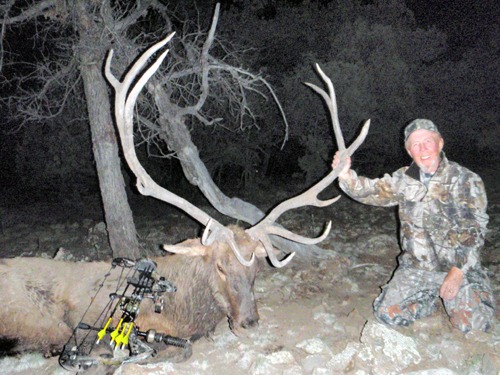 Proof that knowledge, talent and hard work pays off.

Elk hunting is addictive, fun, thrilling, exciting and a lot of other adjectives, but one thing is certain and it can’t be overlooked – elk hunting is tough work.  Let me describe my most recent hunt as an example.

After applying for an elk permit in Arizona for ten years, last year I got lucky and received a friendly greeting from the Arizona Department of Wildlife along with a prized permit.  Why did it take so long?  If you’re into elk hunting, you know Arizona has some really big bulls and a lot of people want to have a chance to hunt them.  Non-residents can only receive 10% of the tags issued under strict quotas for each area in the state.  Depending on the area you seek, your chances of drawing a tag are minimal at best.

Figuring it might be another ten years before I drew a permit; I decided to improve my odds for success by going with a proven outfitter.  I did my research, including searches on the internet and talking to friends who had hunted with the outfitters on my list.  Finally I chose one and booked the hunt.

The archery season is during the rut, around September 15 and lasts for approximately two weeks.  The weather is hot that time of the year but it makes calling and stalking a lot more comfortable than trudging through snow and ice.  The bulls are frantic as they seek cows for their harems and are receptive to calls.

I worked to get myself into decent condition anticipating putting some miles on my aging body and was ready when the season rolled around.  Our living facilities were comprised of many tents of varying sizes.   Each hunter had his own tent and a large tent was set up for cooking and eating.  There were four other hunters in the camp and we had 257,000 acres to hunt.  The terrain was high desert, rolling hills covered with cedar and sage brush.  I liked what I saw.   What I didn’t foresee immediately was the rock covered soil which proved to be tough to navigate.  Literally every square inch of the country was rocky.  For a while it wasn’t a big problem but as the days and miles went by the effort to walk on them became bothersome.

Our plan was simple; we would call from hilltops and try to get in on any bulls that responded.  Considering the timing of the hunt, that being prime rut, it sounded pretty simple.   The difficulty was deciding which bull we would pursue since we couldn’t see a lot of the country due to the trees consequently we didn’t know how big a bull was by the sound of his bugle.  Also, we had a lot of bulls on the ranch and they were pretty vocal.  So it began like a cat and mouse game.  We would hurry toward a bull and try to determine his size.  If he was too small or spooked we would move onto another bull.

This ranch was fabulous and didn’t have a shortage of elk.  The ranch also had strict rules on which elk could be taken.  Immature bulls or young bulls which showed a promise of becoming giants were off limits.  It’s hard to believe and harder to experience, but once I had a 370” bull at thirty yards and the guide wouldn’t let me shoot because the bull likely would become much bigger if he was allowed to grow.  I had shot some cow elk with archery equipment but this would be my first bull.  I had set a personal goal of taking a 350” bull or nothing at all.  This meant I would either shoot a monster or an older bull which had passed his prime or go home with an unfilled tag.

For 10 days we trudged up and down the hills crossed the valleys in between covering four to six miles a day and I had not connected on a bull.  The weather was hot; the rocks were getting to be a real annoyance and I was wearing down.  I nearly called it quits after nine days but decided to stop feeling sorry for myself and committed to seeing it through even if I had to stay for the entire season.

Due to the hot weather, we were seeing a lot of activity in and around waterholes.  On the afternoon of the eleventh day we decided to sit a waterhole to see if we could close the deal.  Some nice bulls had been spotted on one particular waterhole and that’s where we built a blind.

The blind was comfortable and offered a 40 yard shot to the water’s edge.  The weather was hot so we took our jackets off and settled in to wait for the elk.  We had been at the waterhole for about two hours when I saw some elk coming down the mountain.  They were followed by a bull – a nice 6×6 bull.  My guide glassed him and gave me the thumbs up.  He looked to be an older bull with some good mass and long tines.  Now all I could do was wait to see if I would get a shot.

Soon all of the cows were at the waterhole, drinking and swimming in it to cool off.  The bull cautiously made his way to the water, drank and jumped in.  He wallowed around covering himself with mud and water.  It seemed like he played in the water forever.  Finally after about 10 minutes he came out of the water and stood on the shore at 42 yards.

Now I’m not one to get buck fever, usually I’m pretty calm until after the shot.  But, buck or bull fever had a hold of me.  I was way too excited.  I drew the bow put the 40 yard pin on the bull’s chest and shot.  As I shot I raised the bow, I don’t know why, but I did.  The arrow glided over his back into the waterhole.

The bull didn’t know what had happened and he ran for a few steps and stopped again at 50 yards giving me another shot.  this time my aim was true and the arrow sunk into the lung area.  He only ran 75 yards before lying down.  When I approached him I knew I had taken a bull of a lifetime. Later he was scored at 340”, truly a trophy.  My perseverance had paid off.

Was it hard work?  Absolutely.  Was it worth it?  You bet it was.