How to Shoot a Kudu 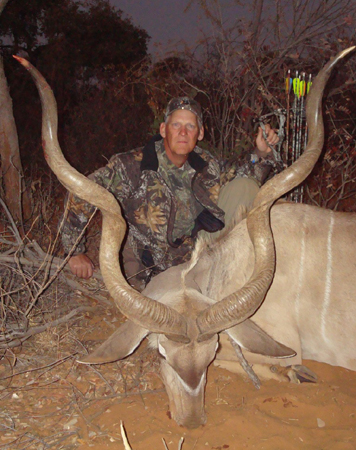 As we approached the brushy dry wash the gritty Kalahari sand ground under our boots making a slight sound that was accompanied by the human foot cadence. The Kudu Bull connected the dots and thundered away from only 25 yards. He had stood there watching our approach and only “broke” when it was apparent that our path of travel was going to intersect his hiding place in the shade of the Grey Camel Thorn tree. His brownish grey coat and vertical stripes had mimicked the thorny brush. Above where he had recently stood a huge yellow grass bird nest, the size of a lazy boy recliner, hung with a flurry of activity focused on the bottom of it. The small sparrow sized Sociable Weaver birds had undoubtedly seen the giant 8-foot tall kudu standing under them, but not Dries Visser and me. 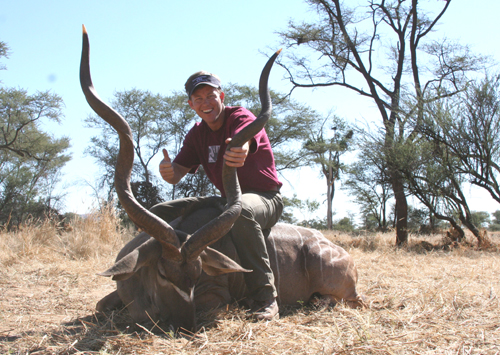 We were scouting the 50,000 acre hunting concession that borders his 10,000 acre bowhunting ranch north of Gobabis in Eastern Namibia. Let’s practice saying the name of this stable African country…ready… Nah-mib-ee-ah. This is southern Africa’s safest and least populated country and way safer to visit than Chicago or Philadelphia. You fly into Windhoek, Namibia. This is not my first trip into the vast Kalahari Desert but it was the first into this particular region. The grass and vegetation was lush compared to the Kalahari I was familiar with. I asked Dries, “Why is it so lush here? We are supposed to be in a desert.” Dries explained, “This particular region is the only area with the Kalahari that gets significant rainfall. The mountains to the east and the swirling winds from the South Pacific seem to converge here and allow this area to be highly productive due to one factor…water. I did a lot of research before settling on this region for our new bowhunting operation. The moisture will mean healthier animals and a shorter time to grow into trophies.”

We walked on and soon came to a waterhole in the open range that was once used for cattle. The tank and windmill still worked fine and the dirt was tacked up like a barnyard…by plains game. A warthog broke from the moist cover as we got closer. Dries pointed out Kudu and Gemsbok tracks plus enough Springbok tracks that it seemed they had rained out of the sky.

“Animals here depend on water provided by these bore holes”, he explained. “Without these the population would be slimmer but these waterholes have been here for most of a hundred years. The animals in the region travel here daily. Dries explained that he was putting in pit blinds at many of the sites and at others he’d brush in ground blinds or even set up a treestand.”

Dries who has been running bowhunts in Africa for 16 years explained that most safari operations are really gun hunting operations that are willing to take a bowhunters money too. His plan is focused on the bowhunter’s needs. “The real challenge for me”, Dries explained,” is placing our new blinds, not a good spot but, in the perfect location. I must take into account the prevailing wind, sun direction and the traditional approach of the animals to the existing waterholes. I see it as a natural history project where I examine all of the factors and then add a predator…a bowhunter.”

Dries, being a bowhunter himself, understands that a reworked rifle set ups won’t do. I remember shooting at a sand pile with him and one of his PH friends, Antoine. He set up a Jack of Diamonds on the sand pile and we began to step back. I figured I could at least come close every time at twenty yards…then we kept walking to thirty, forty and finally to fifty yards. I could hardly see the card let alone hit it plus I only had a 40-yard pin. The pressure was on. I let Dries shoot first…He hit the stinking card on the first shot, then his buddy Antoine shot and nicked the card and turned it sideways. I offered to cut it in half in that I had the sideways shot and came to within 12-inches of doing just that. Oh well, they’re just good at shooting playing cards with a bow I thought. No, they are avid and practiced bowhunters.

All of these puzzle pieces matter if you’re traveling half way around the world to bowhunt plains game. Most bowhunters come here to shoot a “package of plains game”, you know, a multi-species hunt. Most of these packages eventually include a Kudu with the characteristic spiraling horns.

They call him “The Grey Ghost” of Africa. Greater Kudu are to Africa what Elk are to America.  Regal and bush wise, this is likely the number one trophy that most bowhunters who travel to the Dark Continent are seeking. Kudu are a large animal standing nearly 6 foot at the shoulder and weighting up to 550 pounds who have the uncanny ability to stand cautiously in the brush for long periods of time and vanish like a ghost. Their coloration is a tawny brown – grey with thin vertical white stripes circling their body. The camouflage quality of this coat is remarkable. Only a mature whitetail buck can be compared to this master of prudence and elusiveness.

By far not the easiest animal to tag, Greater Kudu are natives of the wooded savanna ranges all over Southern and East Africa including the Kalahari and the Namb desert. Unlike a gemsbok, kudu need standing water to drink. They are primarily a browser and target the small twigs and leaves of trees and bushes. Actually they eat a larger variety of forage than any of Africa’s antelope. This contributes to their wide spread range.  They even occasionally graze on grasses making them a lot like a whitetail. And like a whitetail, they are great jumpers and can clear an 8 foot fence.

The most noticeable and noteworthy aspect of a Greater Kudu is his tall spiraling black horns. These spiraling horns are only found on bulls. It takes 6 – 7 years for a bull to grow into a trophy. Any bull taken in the open range with a bow is a noteworthy trophy but most hunters consider a bull with 48 inch horns a real winner. The world record is around 74 inches when measured along the crest of the horn. Kudu are a prize trophy regardless of size but there are some doozies here.  Here are some successful streaming video bowhunts you can learn from. How To Kill a Kudu 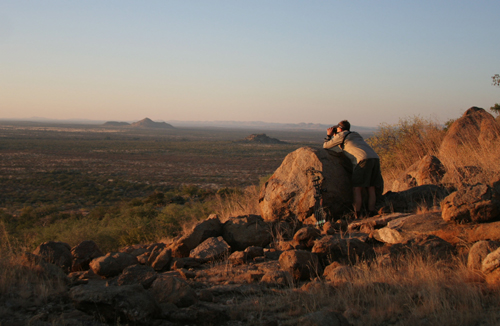 We scouted about a thousand acres of the new open range concession that October day. The waterholes have not been hunted for plains game for decades, if ever. The hunters sitting over the waterholes this year will have a unique opportunity to first at bat. Not that this will ever be overhunted but just the idea of being at the front of the line is intriguing. Robert Hoague and I along with a few friends will be setting up over some of these waterholes in June as we conduct an on-line Africa bowhunt with Bowhunting.net. You’re next up.

Try our African Bowhunter Stimulus Package. Only 4 hunters at a time and the rates will make you smile. In contrast to the last Stimulus Package we do have a job for you and it involves shooting arrows. Look at this package price: Your income tax refund will pay for this.

Pick one: Impala, Blesbok, and Springbuck

If you’d like to book a week in this bowhunters hot spot email – bowhuntnamibia@gmail.com I’ll send you our info and tell you about our one time offer: Bring 3 Hunt for Free during the 2011 season.

Which Organizations Should We Support?