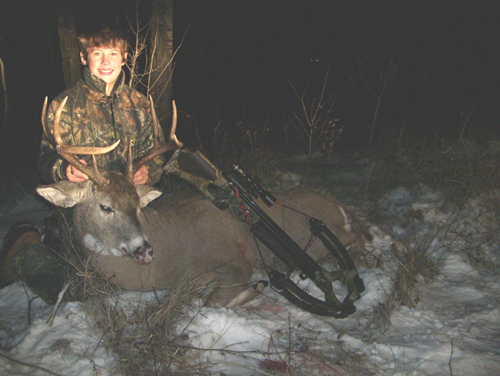 Andrew and I sighted in the Barnett Crossbow with the Victory arrows and found the 125 grain TruFire Switchblade Speed Tip practice broad heads flew perfectly and identical to the regular field tips. I had just acquired nearly a dozen of them to practice with but more practicing wasn’t needed. This set up flew with pin point accuracy. So after getting a blessing from my wife Jane, to hunt over Thanksgiving I booked the hunt for Andrew and I with a friend of mine, Todd Rawlake of True North Trophy Whitetails of Saskatchewan, Canada.

The time flew by and we left Columbia Airport bound for Chicago and on to Edmonton, Alberta at 6 AM after getting up at 3 AM on Thanksgiving Day. Other than the non-apologetic 2 hour delay in Chicago all went smoothly. A four hour drive after arrival had us in camp by 8 PM at the beautiful lodge in Alberta.

Todd had already left to tend to his newborn so we unpacked and settled in. We got to bed about 10 PM and had a restful night’s sleep. The plan was to harvest two deer on film with the Barnett crossbow, Victory arrows and TruFire Switchblade Speed Tips broad heads just as we did three weeks ago in Kentucky. The difference was about a fifty degree temperature change and serious post rut doldrums. The high the day we arrived was minus 1 degree F with a lot of snow but fortunately it warmed up to the teens by the next morning. Todd already had the blind set up for us in a strategic crossroads used by the deer.

We got up at 6:30 AM and Todd arrived about 7:30. First light was around 8:30 AM but he informed us of the lack of activity he had seen on all the trail cameras in the mornings. So we elected to head out in the late AM after rechecking the zero on the Barnett crossbow which was dead on.

We were in the blind by noon and sat to nearly 5 PM before seeing our first deer. The weather was clear, calm and the temperature had warmed into the teens but the first deer and all the rest were unbelievably on edge and spooky. I had never seen this wariness in deer up here before.

Over the next hour the original basket 9 point and three does with one fawn skirted very cautiously in and out of view. As the light grew dim a nice medium framed ten point came in but stayed so briefly we didn’t have a chance for Andrew to get on him and it was too dark to film. As we packed up a 120 inch 8 point came in and stayed briefly as Todd drove in to get us. It was dark by 6 PM. We packed up what had taken us 30 minutes to unpack when we first arrived in a few minutes and left to go back to the lodge for dinner, TV and some sleep. Andrew did fine and sat the six hours without a problem especially being his first time in these temperatures and this long of a sit. First however, I had to discharge the Barnett crossbow into a solid foam target. The Victory arrow blew through the target and went off somewhere into the woods.  I was wishing  we had a Ballistic target there as we did in Kentucky. That is one unbelievable target that stops an arrow, even one shot by the Barnett.

We got up at 8 AM after sleeping in, got some breakfast, packed our lunches, went through the process of layering layer upon layer of clothes for the day’s hunt and headed out. We were in the stand by 11 AM on this overcast mid teen temperature morning with snow flurries. We were not even fully in the blind yet when a bull elk walked out and kept us occupied for the next hour. Then, although the weather was perfect, we had no activity from noon till 2:30 PM. The rest of the day, we watched the same three does, one fawn and the same elk traverse in and out till dark. Not a single buck came in despite the perfect weather. We were dejected, seven hours and no bucks. So back home to a dinner of fried walleye by Todd’s dad, Robert. What a nice guy he is. Some more hunting shows and bed by 11 PM. The trail camera from the other blind had one buck on it with a broken beam all day and yeah, we lost another arrow discharging the bow.

We were up at 7:30 and left at first light to get an early start. Snow flurries and 20 degrees was the weather. We arrived and were settled in a little after 9 in the same ground blind for hopefully a better day. We just needed the big bucks to cooperate as they had been caught on camera four and five days earlier at the same blind in daylight.

It was dead still till around 2 PM when a different but smaller bull elk came in. He stayed a while and left when the original bigger bull came in and worked over a tree for nearly an hour depositing every scent he could from his neck, eyes, nose, and lips all over the rub. Finally, around 4  the same little nine point basket racked buck strolled in for a few minutes and left nervous as usual. Andrew was cold that day and both of us were bored to some degree. We did homework, read some hunting magazines and the Bible, ate but basically sat without much outside entertainment except for birds. The signs were obvious that the deer were feeding heavily at night.

Around 5 a doe walked in followed by a nice 130 inch 8 point. I told Andrew he needed to take him. Andrew was cool as a cucumber until he grabbed the Barnett Buck Commander. His heart rate and breathing increased rapidly as he moved into position setting the crossbow on the top of a pair of shooting sticks.  I ranged the deer at 45 yards and turned the video camera on. I then made sure the arrow’s intended flight was clear of the blind.

Just as Andrew was ready to take the shot a doe stepped right in front of the perfectly positioned buck and e stayed put with neither of them budging  for what seemed like the proverbial eternity. After two agonizingly slow steps forward by the doe, Andrew had a clear shot and I was on the buck with the camera rolling. As usual, Murphy raised his ugly head when the safety would not come off. As experienced in practice many time, if the bolt is not 100% fully seated backwards you cannot take the safety off. A good safety feature but a little cumbersome to reseat the arrow while you are already in the aiming position. But Andrew reseated the arrow and just as he was about to pull the trigger the deer spooked for no apparent reason and bolted off. That was very similar to the behavior we had been seeing, deer constantly on high alert. Now we were dejected to say the least.

We settled back in for the rest of the remaining probably inactive daylight but as if sent to redeem us two does and one fawn came in followed by the same buck. He went straight to the same spot and this time Andrew was ready with the safety off before being in full position. The sound of the Barnett Crossbow’s limbs retracting rapidly was followed by a familiar thud from a perfectly placed heart shot despite the best attempt at jumping the string. They all bolted out of sight in unison. Andrew was shaking and well, so was I.

As the light faded rapidly, we decided to go after him after viewing the video. He couldn’t go far with that hit. We found the blood soaked Victory arrow perfectly intact and Tru Fire Switchblade broad head fully deployed and in perfect condition. The spray of blood on the snow certainly made an easy to negotiate the path the eight point took as he departed. Andrew found him piled up in a small ravine fully expired some 70 yards away. Andrew now had two great bucks in one month from Kentucky and Canada both lethally taken with Barnett’s crossbow, Victory arrows and Tru Fire broad heads.

He was ecstatic and yeah, I was proud of him. Three days and over 22 hours sitting in sub 20 degree weather and he said ‘Now it was my turn’. Todd came and we dragged the buck out, took pictures and cleaned him before returning to the lodge. Unfortunately, I lost yet another arrow as we discharged the crossbow into one of those square Block target before heading back. The Victory  arrow blew right through the target again never to be found. I only wish Todd had one of those Ballistic Targets which are just unbelievable.

We woke up with high hopes at 6:45 AM and left by 7:30 for an all last day sit if needed. Weather again was overcast and in the teens. We arrived at the blind before first light at 8:15 and the deer had obviously fed all night again. We had seen a good buck in a field on the way out the night before but he had gone off to bed down.

At noon Todd picked us up to try spot and stalk. We had seen nothing except a crow. We drove in the frigid air in a Polaris Ranger for 1 ½ hours and saw nothing except tracks galore so we went back to the cold blind to warm up and eat some lunch. Again, we sat till 6 PM with only seeing the same bull elk and doe for few minutes each. My hunt was over and I hadn’t seen a shooter. This was the first time that has happened to me Canada in years. We pulled trail cameras from three spots and the deer had flat disappeared in this post rut period. They weren’t even captured at night let alone in the daylight for the past two days.

Either way, we had a good hunt. Andrew got his first Canadian deer and with the Barnett Crossbow and on film to boot. I was just as happy and excited as he was. All the products used worked very well inclusive of the Barnett Crossbow, Victory arrows and Tru Fire Switchblade broad heads. So now it was back home to South Carolina and the tail end of our season with hopes of more crossbow action next year for the both of us.