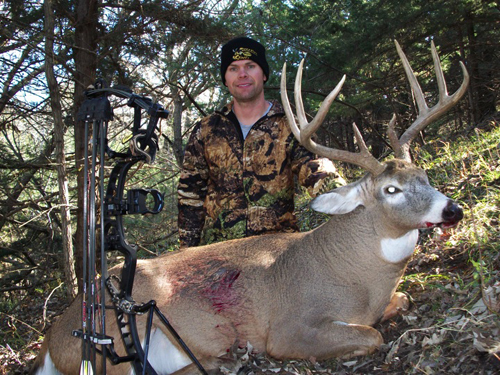 Author with his trophy 4x4.

October 29th, I had a decision to make. Which stand gets the call for Saturday morning? I thumbed through maps of properties I had permission to hunt. The writing “Sx4” stood out on the map. It indicated a stand I had hung in a thick oak draw that joined an open creek bottom. Every year there were four good scrapes around a single cedar tree, and thus I dubbed the spot “Sx4”.

I got situated on stand well before sunrise. It was a clear morning where you could hear a turkey yelp from 2-miles. There was no wind and the pure silence echoed in my ears. I had not heard or seen anything and it was approaching 9 am. Where were all the deer? The scrapes looked freshly worked and new rubs on small cedar trees indicated deer had been here recently. Plus it was October 30th, time for the pre-rut to heat up.

At 9:15 I heard a deer. I turned to see a lone doe approaching. She was checking out the estrous scent that I had laid down. I had a couple doe tags in my pocket, …you know where this was leading… I turned on the video camera and since no other deer where approaching I was contemplating taking the shot.

She turned sharply and began looking up the draw. I could hear other deer crunching on the dry oak leaves. Then out of the silence, “Brrrrraaaaaappppp”. A loud buck grunt! A doe bolted into the open and the bird-dogging buck followed. I didn’t have to look very long to know he was a shooter. His frame was well outside his ears and he had good mass.

The hot doe zigged to the creek bottom and I lost sight of them. I was out of position and wanted to turn before they came back, but couldn’t as the first doe was onto me. Then the hot doe zagged back through a shooting lane behind me. The buck and I both watched, contemplating our next move.

Things went into slow motion. It felt like I was at the starting line of a race and someone said “GO”. The buck bolted after her. I quickly spun a 180, drew my bow, and let out a “Maaaaaa” (my version of a doe bleat). Fortunately, the heavy antlered 4×4 stopped a half step from being home free and out of my shooting lane. At 20 yards I didn’t take a lot of time to think about it. The hit was slightly back from a bull’s eye, however as the buck bolted I felt confident it was a kill shot.

The adrenaline and morning cold caught up with me. Shaking, I forced myself to sit down for 30 minutes. After the wait I took up the trail. The arrow was bright red and I found bubbly blood on the leaves. The blood trail got better as I went. About 80 yards into it I found a spot on a sapling smeared with blood and hair, thinking he must be loosing his balance. I looked up and saw him laying 20 yards ahead on the trail. Sweet!! All the hard work of scouting, getting up early, and staying out late, finally paid off. It’s a great feeling, …a feeling that keeps me bow-hunting. The buck was a straight 4×4, 18 inch inside spread, scoring 137 inches. No action, to tagged out, in less than 5 minutes, that’s bow-hunting… don’t’ quit, it can happen anytime! Thanks for reading and good luck on your future hunts. Stay safe.

Day 2 was a Blast at the ATA

Video Coverage from the ATA