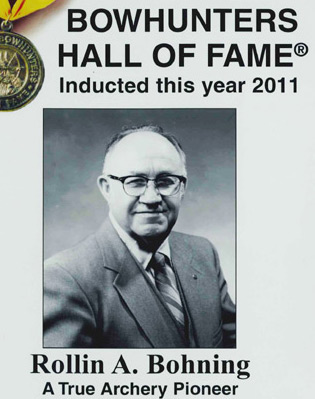 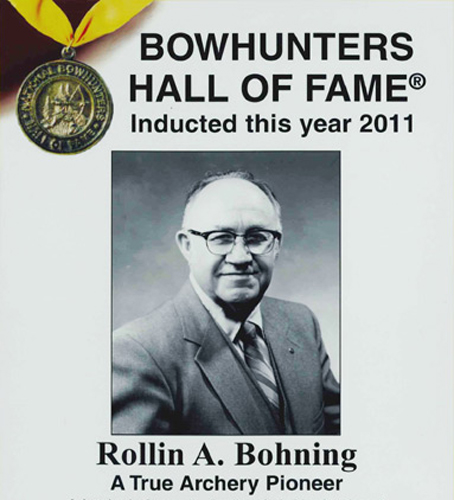 In a ceremony held during the “NFAA World Archery Festival” in Las Vegas, Rollin A. Bohning, founder of the Bohning Company, was posthumously inducted into The Bowhunters Hall Of Fame. As a “Contributor to the sport”, Rollin was awarded this honor based on his designs of archery equipment. The modern arrow that we know today is comprised of 4 parts. A shaft, a point or broadhead, fletching and the glue that holds them all together. Rollin is solely responsible for the adhesives that brought these 4 parts together, forming what we know as the modern arrow. Accepting the award on behalf of the Bohning Company and the Bohning family, was Vice President of Sales and Marketing, Dale Voice.

“I feel very honored to accept this award on behalf of Rollin Bohning, his family and the Bohning Company. I was not fortunate enough to ever meet Rollin Bohning but he certainly had a presence in my early archery experiences every time I fletched an arrow with Fletch-Tite, waxed a string with Tex-Tite or glued in an insert with Ferr-L-Tite.”

“It wasn’t until I began my career with Bohning that I came to know just how much impact Rollin had on this great sport. One of his favorite sayings was,
‘For the lack of a horse shoe nail, the battle was lost” , … we provide the nails.’”

Voice added:
“Each time an archer attaches a nock, feather, vane or point to an arrow shaft, it is largely due to the research and development efforts of Rollin Bohning. Rollin was an archery industry pioneer, a credit to humanity and an inspiration to us all.”

Congratulations to the family and entire Bohning organization from our bowhunting.net family. Rollin Bohning was an archery pioneer and this honor is well deserved.

The modern arrow that we know today is comprised of 4 parts. A shaft, a point or broadhead, fletching and the glue that holds them all together. Rollin Bohning is solely responsible for the adhesives that brought these 4 parts together, forming what we know as the modern arrow.

“Behind the successful use of aluminum shafts, there must be cements and finishes for making the arrow. Like the saying goes, “For the lack of a horse shoe nail, the battle was lost”, … we provide the nails.”

Archery was a very small industry in the late 1940’s. The nucleus of this fledgling industry was Chuck Saunders, Earl Hoyt, Fred Bear, Doug Easton and Rollin Bohning. Archery had always been a passion for Rollin. As a boy, his outdoor skills were honed in the Boy Scouts, where he earned the rank of Eagle Scout. He eventually brought his love of the outdoors and his passion for Archery together and taught archery to his fellow Boy Scouts. These passions set the course of Rollin Bohnings’ life.

A chemical engineer by profession and a bowhunter by avocation, Rollin A. Bohning founded The Bohning Company, Ltd., in Detroit Michigan, in 1946. While making a set of hunting arrows for the upcoming deer season in Michigan, Rollin could find no cement suitable to hold a broadhead on to his arrows. Rollin began using an adhesive he originally developed for the auto industry to attach his metal points on to wood shafts. He called the arrow point adhesive Ferr-L-Tite. Under the name, R.A. Bohning Adhesive Company, he set out to solve the problems common to all archers. Before Rollins’ adhesive was introduced to archery, archers used everything from hide glues to a paste made from flour and water to keep points on, and in most cases, they would pin them on besides gluing them.

In 1948 another archery industry standard was introduced and another problem solved when Doug Easton, a close friend of Rollins’, asked if Bohning could develop a fletching adhesive that would work with aluminum shafts. Fletch-Tite fletching adhesive was born. This helped Doug Easton realize his dream of making aluminum shafts the first choice of the world’s archers. Rollin was always happy to help fellow archers, who he viewed as extended family members.

Rollin, never the type to rest on his accomplishments, was in the process of improving on the beeswax used to waterproof the then new Dacron bowstrings. Beeswax had been the standard used with linen strings, but beeswax just flaked off the new man made string material. Rollins’ answer was to mix beeswax with other waxes and oils to form a stickier compound we now know as Tex-Tite, another industry standard and another problem solved for archers everywhere.

In 1952, Rollin left the auto industry to fully devote his time to his young archery company, the R.A. Bohning Adhesive Company. His first factory was the basement of his Lake City Michigan farmhouse. Here he developed products like, hot melt Ferr-L-Tite, a safer version of his original liquid Ferr-L-Tite and Dri-Tite, a water-proofing compound for feathers. 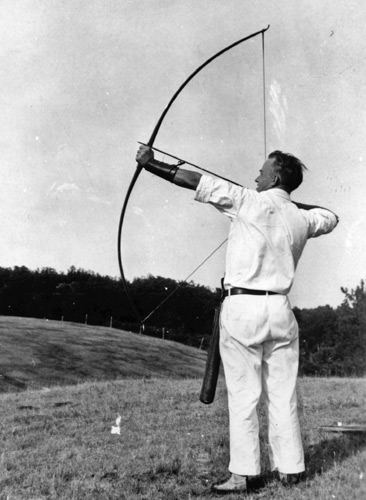 In the late 1950’s Easton found that aluminum oxidizes and they had to come up with a coating that would seal their aluminum shafts. The answer was a hard-coating of nickel acetate that produced a nice clean, aluminum color. The surface of these shafts were so slick, paints would not adhere to them. At that time people either made their own arrows or they were made by a local arrow maker. It seemed that everyone shot crested arrows and most had their own personal crest. Rollin again went to work developing a lacquer that would rely on adhesion through electro-chemical bond, instead of the traditional mechanical bond. The first step was to reformulate Fletch-Tite, making sure it would adhere to the new anodized shafts. This provided a base to make a new lacquer, and in 1958 Fletch-Lac finishes were born. One more industry standard and yet another problem solved for archery.

In the early 70’s, Rollin decided to semi-retire, but like any true pioneer, his creative intellect constantly lead him to new areas of discovery. He introduced the feeding of yeast with ascorbic acid (vitamin C) to decrease the time required for bread to raise. He innovated a more efficient way to thread looms. He perfected the raising of Orchids from seed. But he was just getting started. In his retirement, he developed a high-lysine corn that could be grown in the drought stricken areas of Africa, in an effort to help eliminate world hunger. Using his knowledge of chemistry and health sciences, he also developed a non-medical dietary method to control diabetes. The Mayo clinic of Rochester, Minnesota uses his dietary method in place of painful and costly injections. Rollin A. Bohnings’ memory continues to inspire young scientists today in the form of a scholarship that bears his name. Established in 1992, this scholarship has helped 11 young men and women in their educational pursuits.

As was his way, once he solved a problem, perfected or improved something, Rollin published his findings in the appropriate journals and moved quickly to his next exciting challenge. Rollin exemplified honesty, integrity, dedication and concern for his fellow man. Each time an archer attaches a nock, feather, vane or point to an arrow shaft, it is largely due to the research and development efforts of Rollin Bohning. Rollin was an archery industry pioneer, a credit to humanity and an inspiration to us all.

Rollin Bohning and his adhesives are the “glue” that held the modern arrow and thus, the archery industry together in the early days.

• During retirement, developed a process to decrease the time required for bread to rise.

• During retirement, developed a dietary method of treating diabetes.

• During retirement, developed a high-lysine corn, able to grow in arid conditions to combat world hunger.

• During retirement, developed a more efficient way to thread looms.