The Best Seed for Your Buck 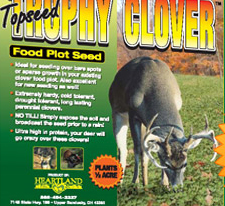 Despite the recent economic downturn, deer hunters are still spending money on hunting, and building food plots to hunt over. But with fewer dollars to go around, we’ve become a lot more price conscious, endeavoring to get the best bang for our deer hunting dollar, while striving to provide our deer with the best nutrition. So how would you feel if you found out you were paying the same price as the next guy for a pound of seed, but getting a third less? Depending on which seed brand you’re buying, you may be doing just that. 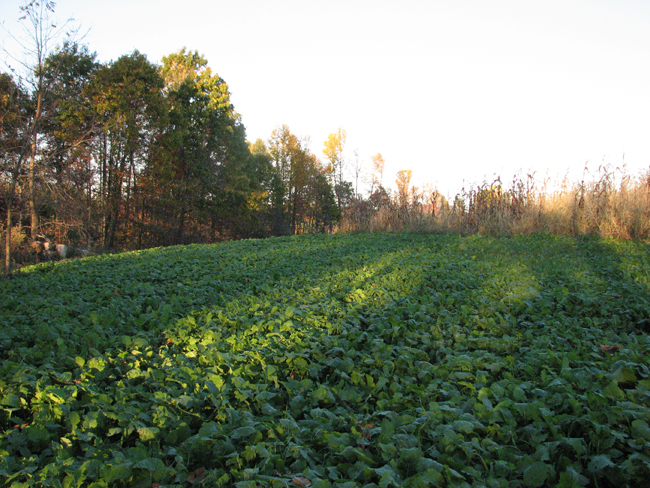 The Bait
A lot of seed companies utilize pulverized limestone or sodium bentonite (clay) coating on their seed, claiming it increases plant production. What they don’t tell you, and all but the most perceptive customers fail to comprehend, is, that coating is replacing actual seed. Their “4-pound” bag of seed only contains a little over 2-1/2 pounds of seed. The rest (more than a third) is clay.
Why Coat?

Knowing that, you should be wondering why they would coat their seed. There are two reasons. One is because the clay contains innoculants. Without getting too technical, legumes like clover need to convert (fix) atmospheric nitrogen into a usable form in order to grow. They do so through a symbiotic relationship with rhizobia bacteria. These bacteria exist in the soil, but may take some time to bond with plants to promote nitrogen fixation. Innoculating seeds with them at planting time speeds up the process. Adding clay also increases the seeds ability to retain moisture, which can be beneficial if sprouting occurs during a relatively dry spell.

When applied properly, innoculants can indeed be beneficial to plant growth. “The issue when using innoculants is,” according to Heartland Wildlife Institute’s Les Ray, “you have to use the product within 24-48 hours of mixing. It says that right on the label.” Otherwise, the bacteria die off in the presence of air. In other words, if you don’t plant your clover seed within a day of it being coated, the innoculant is virtually useless.

The bentonite clay and limestone do help retain moisture, but even that benefit is of little consequence. While there may be a slight increase in the proportion of seeds that germinate, it doesn’t even come close to making up for the difference in the amount of seed. In fact, according to Heartland, “There have never been any documented studies where the difference in germination rates between coated and un-coated seeds was statistically significant.” 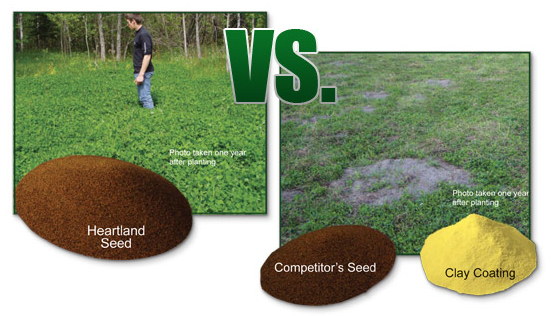 What’s the Difference
Heartland’s competitors sell coated seeds, claiming that coating increases yield when the opposite is actually true. Why? For starters, Heartland puts 33 percent more seed in their 4-pound bag (see Table 1). The difference becomes more obvious when you consider a pound of clover contains an estimated 780,000 seeds. That means for the same price, Heartland’s 4-pound bag contains over a million more seeds than the same sized bag from their nearest competitor. That translates to over a million more clover plants per half acre.

But Wait, There’s More
Seed count is not the only difference. Heartland’s Topseed Trophy Clover is a perennial clover. Once established, perennial clovers require less labor to maintain and are more successful at competing with undesirable grasses and forbs. Other companies claim their comparable blends are perennial as well. They’re not, exactly. Many companies add annual clover seed to their perennial blends, and some may be as much as 33 percent annual.

The immediate result is that the plot may actually green up quickly, as perennial clover takes longer to become established. “What one of our competitors did was add 33 percent annual clover, which comes up a lot quicker than perennials. This solves the problem of under seeded perennials because the plot “greens up” faster. When the annual clover goes away the first winter, you’re left with a very thin seeding, and must rely on the under-seeded perennials to fill in bare spots,” says Ray. However, as the parable of the tortoise and the hare teaches us, slow and steady wins the race. “The customer doesn’t realize until a year or two later,” adds Ray. “Then their plot starts to look junky.” Weeds quickly take over the bare spots left by annual clovers. The same plot planted in perennial clover should remain lush if properly maintained.

Economic Analysis
The price of a bag of seed – $30 – is disproportionate to its overall importance in the final outcome. Consider that the most important thing you can do to ensure a successful food plot is a $15 soil test. The next most important is choosing the right seed. The big money goes for land, labor and equipment. “But if you don’t have success with your crop, all that other money is wasted,” points out Neal.

There’s another way you can look at it. When you purchase a 4.5-pound bag of Heartland’s Topseed Trophy Clover you’re paying $7.50 a pound for pure perennial clover. When you pick up a 4-pound bag of a competitor’s brand, you’re only getting a pound an a half of perennial clover, and you’re paying $7.50 a pound for clay. It doesn’t take a soil scientist to see which is the better value.

As you can see, our Topseed Trophy Clover contains almost 2 pounds more seed for the same weight, price and coverage. If you’re paying seed prices for food plot mixes, we believe you should get seed… not clay.

Play the Wind, Shoot Your Deer

The Truth about Gortex