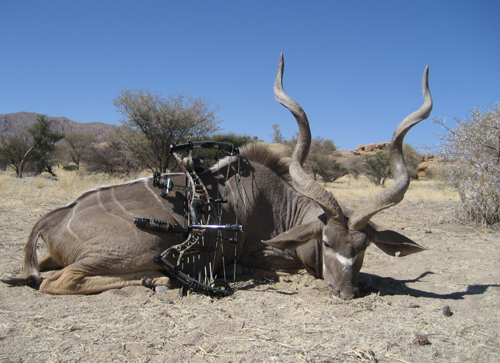 This can be part of your African Adventure

Dries Visser and Wenzel Badenhorst, from the Dallas Safari Club, came into Lafayette to visit. I met them at my friend Tim’s restaurant. We had a good visit. The next day, we had a supper at my house and Tim and I invited some friends to come over and meet our guests. We had a good time. They, Dries and Wenzel, started showing DVDs of African hunts and I got really excited. After looking at the videos, I got even more excited and I knew I was in. I spoke with my friend Tim and told him, Dries and Wenzel and told them to book a hunt for me.

The next day, I went to Tim’s restaurant and spoke with his father, Dean. I asked him if wanted to go as well. The excitement then began for him as well and he even asked his wife, Katy, to go . So we booked the hunt for June of 2010. After picking our dates, we sent in our deposit. June couldn’t come any faster.

We flew from Lafayette to Atlanta. From there, we flew to Frankfurt, Germany. Our layover was 12 hours. In order to get a good rest, we got a hotel room. From Frankfurt, we flew to Windhoek, Namibia. We were picked up at the airport and rode two and a half hours to Kanona Safari Ranch. Kanona Safari Ranch was the lodge that we stayed. We had finally reached our destination. Our rooms were first class accommodations. They were just beautiful. Later, I met up with my professional hunter (PH) Terry. We hit it off real well with our conversation. The lodging and the camaraderie were a fantastic start to what was to be an amazing adventure.

We ate lunch. Shortly thereafter, we began our hunt. Terry and I went one way, and Tim and his parents went another way. Terry and I reached the blind. We sat there for fifteen minutes and animals of all kinds of species could be seen. I then saw my first target. A wildebeest. I shot my arrow. Hit. The animal ran for about 80 yards and dropped. I was excited. I was in Africa and shot my first animal. We called for the others to pick us up. We also loaded up my fresh kill. We arrived at the cleaning shed where the animal was dressed out by the natives that work there. They also took their share of the meat as well.

After getting cleaned up, it was time for celebration. They told me it was tradition to drink Jagermeister after a kill. I informed them that I didn’t drink, but eventually gave in. Afterward, we had a wonderful dinner with everyone in attendance. Good food, good wine, good people. Africa was being really good to me.

The next morning came and I could not wait to get started. We had breakfast at 5:30am and then we were off for more hunting.

That morning, I took down a good impala and blesbuck. After shooting those animals, we were picked up and I got to meet Johan, the owner of this property and also Kanona Safari Ranch. We made our way back to the ranch where I met Johan’s wife, Lisa. They were so accommodating and I couldn’t be any happier.

After all was said and done, I shot eleven animals. My first African hunt yielded me an impala, a blesbuck, a duiker, 2 kudu, a heartebeest, 2 wildebeest, a zebra, a 32” water buck, and trophy of a lifetime, a leopard. Not bad for my first African hunt. I sat in a blind for 3 hours to get that leopard. I couldn’t be more thankful for my PHs, Terry and Wenzel. I would recommend Kanona Safaris, in Namibia, to anyone. After having making great new friends, I know without a doubt that I’ll be going back.