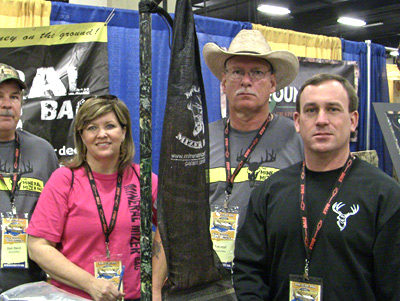 Just take the bag into the woods and tie it to a limb (the bag’s tie string is plenty long). Next you pour water into the top of the bag and soon the liquid works its way through the bag and drips on the ground.  You adjust the height of the bottom of the bag so it is just out of reach of what you are hunting. Don Davis, the owner, showed me the bag as well as video of deer, bears and wild hogs visiting the mineral lick under the Mineral Mizer Bag.

Moving on we came to the Ground Game 360. A portable chair for hunting. This innovative seat slides forward and backward as well as turns 360 degrees. It has a back rest and was comfortable to sit in. It was built sturdy and is light weight and easy to carry.

The Ground Game 360 is perfect for run and gun style turkey hunters as well as predator hunters and hunters that stalk deer.

Next we stopped at the booth for Mountain Mike’s Hunts. Mike McKeau hunts Nebraska and Kansas. He has Merriam’s wild turkey hunts for shotgun or bow. The season is April 1 thru April 31. Nebraska has over-the-counter tags for Turkey, Deer and Pheasant. Many hunters book both deer and pheasant hunts. Mike offers both Whitetail and Mule Deer trophy hunts in Nebraska and Kansas. The Kansas hunts are on the Republican River and take place between November 11-21, the peak of the Whitetail and Mule Deer rut. Give Mike a call at 307.774.5977

Further down the row we found Turkey Tail Saver. Anyone who has tried one will tell you  that using a real wild turkey fan on your gobbler decoy can help it’s “turkey getting” qualities. However there is a drawback to using real turkey tails, they get beat up by carrying them around. Enter the Turkey Tail Saver. It protects the turkey fan. It’s the best way to transport your real tail in your vehicle as well as in the field. And it is perfect for storing it off season.

Another interesting outfitter was Double Deuce Ranch. The ranch is on 3,000 acres of privately owned land in northern Missouri near Powersville in Putnam County. Mike Helbing of Double Deuce has Bowhunts for Whitetail and Wild Turkey that include 1 buck, 1 doe and 2 turkeys. In addition there are 4-Day Spring Turkey Hunts, and 4-Day Muzzleloader deer hunts. Plus the ranch has hunting for Quail and pheasant.

Coverage from the NWTF show to be continued…