Play the Wind, Shoot Your Deer 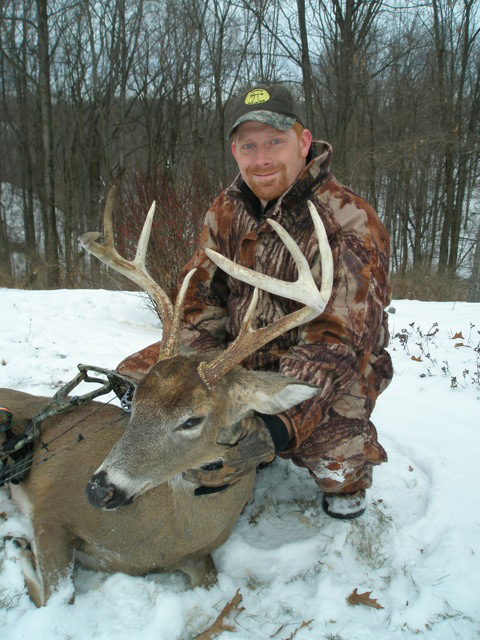 The author with his Jan. buck. Hunt smart, play the odds and use the Hang-On Buddy to put those odds in your favor.

A wise friend told me that; “I love it when I go out hunting and don’t see anything.” His theory is that the longer you sit in the same spot, the more statistically likely it is that a deer will come by that you want to shoot. Well, I’d like to qualify his theory.

Look at it this way, if you buy scratch and win lottery tickets from a new stack, there’s likely a winner in there. The more tickets that are taken from that stack that aren’t winners, the more likely you are to buy a winning ticket in that stack. The same goes for games where you pick numbers. You are more likely to win by playing the same numbers all the time. Remove variables and your odds go up – period. However, here’s the kicker; If the winner has been already removed from the stack, your odds of winning go to zero.

The same theory goes for deer hunting. You have to establish that there’s a deer in the area that you wish to shoot (i.e. there’s a winner in the stack). Everyone’s got different criterion for what a shooter deer is; whether it’s a freezer filler management deer or fodder for antler stew. For me, that “shooter” varies with the deer herd health where I hunt, the state of my freezer, and the chosen hunting tackle (traditional, wheel bow, muzzleloader, rifle, etc.). Once you establish that there’s a shooter deer in the area, that’s when logging hours on one stand (picking tickets from the same stack) start to tilt the odds in your favor.

You can do some things to tilt the odds in your favor though, and two are using calls and playing the wind. Lots of people completely forget about how the non-peak rut can be extremely productive. Two years in a row, I’ve managed to take quality bucks after Christmas in PA. The more predictable doe feeding patterns filter lonely bucks into daytime activity.

The biggest success story for my PA buck this year however was proper compensation for the wind. Yes I logged the hours and did some calling, but by the time late season archery rolls around in PA the deer are in a hyper-aware state at all times from hunting pressure. The slightest whiff of human turns them into high-speed beef.

Earlier, in August, I had set up three Hang-On Buddy™ (H.O.B.) brackets in a three acre plot of land planning for three different wind directions. Three locations might sound like a lot, but using the mounting brackets as I did ensured a good stand location regardless of the situation and wind directions. Plus, at only $19.99 each, it just makes good economic sense to help ensure the best locations for the best results. I was ready for my 2010 season, regardless of which way the wind was blowing.

The first hunting day in PA after Christmas was Monday. I got in the Northwest wind stand with high hopes. Even though I hadn’t seen any shooter bucks on the trail cameras in weeks I had a good feeling. Right at dark, about 100 yards away, a stream of does came out followed by a very respectable four by four buck. Game on! Now it was just a matter putting in the time and trying to do everything right. With some hard work and luck I felt the statistics would turn my way.

On January 4th, 2011 my obsession with the wind paid off. It was only two days before the Archery Trade Association (ATA) show in Indianapolis, IN. I was slated to go to the shop and pack up the booth display that evening for an early ATA departure the next morning. I hadn’t filled my tag yet and I thought if I had any chance at all I’d better get out for the afternoon hunt.

The wind was really strange for PA in January; straight out of the Southwest. I’d logged plenty of hours in the Southwest stand earlier in the season, but I’d been focusing on the Northwest as that is the predominant wind direction in winter.

I quietly hoisted up my H.O.B. equipped Gorilla treestand in the Southwest bracket, put the pin home, got in the stand and hoisted my bow. I was hoping the statistics were on my side.

Taking a hold of my rattling horns I rattled the tips together for a one or two minute sequence every fifteen minutes, when straight out of the South a button buck came in – followed by an adult doe. Oh my trigger finger was itching, but I didn’t need the meat this year, so I let the pudgy doe walk.

Around 4 P.M. that same string of does filed quietly past my location
following the same South route and being chased by a very nice classic four by four, the same buck I spotted the Monday after Christmas!

Focusing on my front sight, my slightly blurry aim point started to settle (along with my nerves!), but the buck walked quickly right through my shooting lane! Luckily, I had cleared another lane slightly to the West. The buck stopped right in the middle of the lane. Again, my pin settled, my nerves settled, I exhaled half way and let the arrow fly. A perfect twenty yard shot and a perfect 35 yard track. Count Wackula strikes again!

I couldn’t have succeeded without the ability to stay mobile and use the wind to my advantage with the Hang-On Buddy™. Multiple treestands are expensive and we all know money doesn’t grow on trees, so for the cost of the extra mounting bases I can hunt more locations, have a nice treestand, and play that wind! 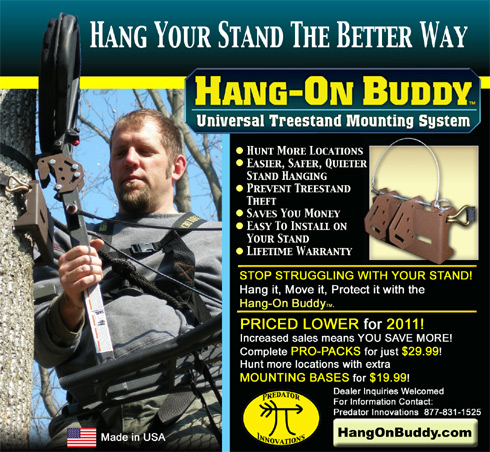 The Truth about Gortex