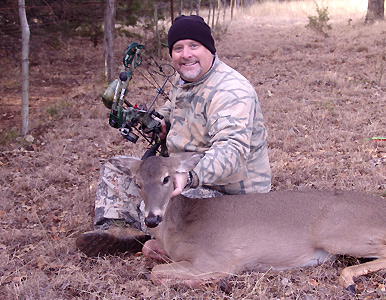 So… after yesterday’s action I have to hunt this morning too. C’mon back Big Boy.

It’s 18 degrees. Wind 5 mph. Ran out of oatmeal with raisins — but found a box of Original. It’s kinda bland but ok. After today I can’t say “oh well, there is time left.” Somebody wish me luck.

An uneventful hour passed. I looked up. A doe was 10 yards in front of me! It waked through. Three more came up from behind me and then went to the 120. Three more came while the others were in sight. Nothing happened until 9:30 when I received a text.

My buddy Robbie Cramer just got a doe. He also said he is freezing.

When Robbie was almost to his tripod stand he heard a wild boar growling nearby in the dark. Robbie hurried to the stand and climbed up to the seat. At 9:00 nothing had happened and Robbie was about as cold as he could stand. So he got ready to descend.

Three deer came up from behind him and passed the tripod on the left. Robbie carefully eased his bow into position and took aim. He made a perfect heart shot on a doe and watched it run 40 yards and pile up. 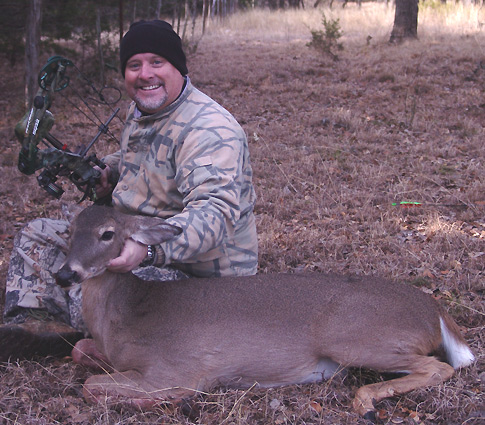 I drove to Robbie and took his picture with his doe. He used a Bear Code and a Grim Reaper RazorTip broadhead. True to Grim Reaper’s slogan Robbie “Watched ’em drop.”

We took the doe to Whalay Deer Processing in Hamilton and then ate specials at Storm’s Hamburgers. When I got home I finished packing for the ATA Archery Trade Show, put everything in my truck, and decided to hunt this afternoon too.