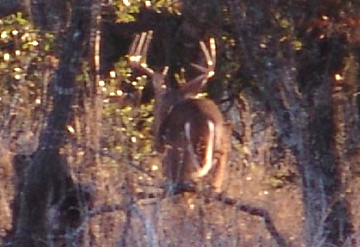 Breakfast Notes: Somewhere around here Big Boy is doing his thing. Lately he is traveling with 3 bucks. I’m seeing 2 of them, the younger ones. This is the last day I can hunt.

Down the hatch with the oatmeal and coffee and it’s off to the deer woods for the 1st time this year 2011 and the last time this season. It’s 34 degrees with winds out of the north at 1 mph but soon to be 15 mph. No wind chill now but in an hour I’ll be glad I’m brought my warmest coat.

From The Ground Blind

3 bucks were nearby before daylight. Does were around in several places.

Here is a young buck checking things out. He’s walking up to the doe  standing by my 12 yard marker rock. 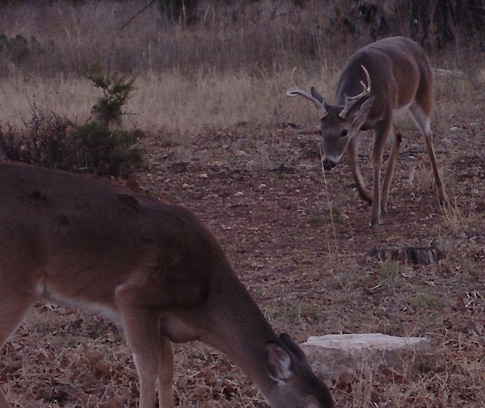 A second buck came from the north west and chased it away. It returned to the food plot and approached the does in the area. They left him alone. Something caught his attention and he stared intently toward the gully. 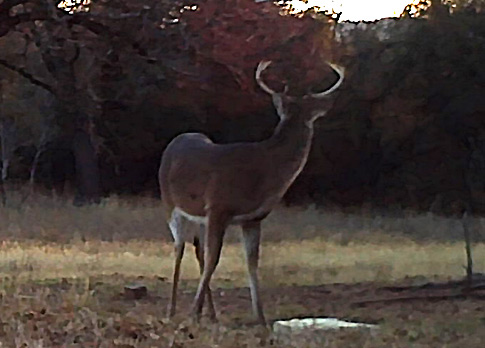 There was no doubt that something was up. Soon I saw 3 bucks came out of the gulch stop in the trees along the edge of the drop off.

Two of the bucks came out the trees and I could see them better. They were 8-points, one had two broken tines. The other 8-point had a nice rack. 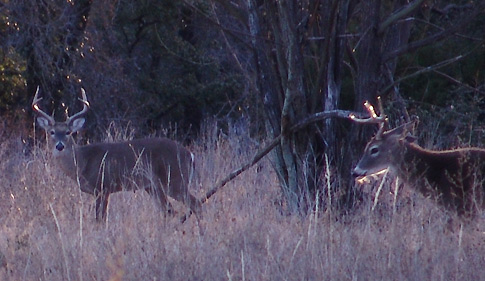 The buck near me walked out to meet the new trio of bucks. 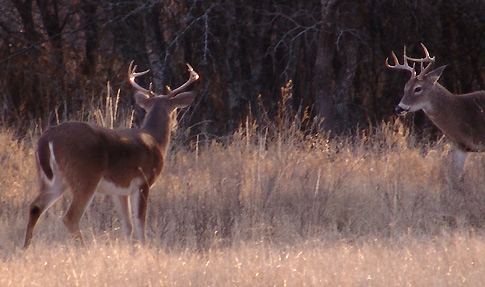 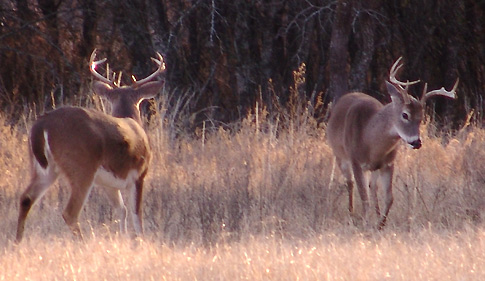 It was very aggressive and, surprisingly, cowed the larger buck.

Big Boy stayed in the woods and I couldn’t get a pic because of the brush and trees. He and crew moved up to the 42 yard line just past the edge of my food loot. All the does in the area had left as soon as they saw these 3 bucks. And there were none in sight now.

I couldn’t get a picture of Big Boy but I got two of this big 8-point. 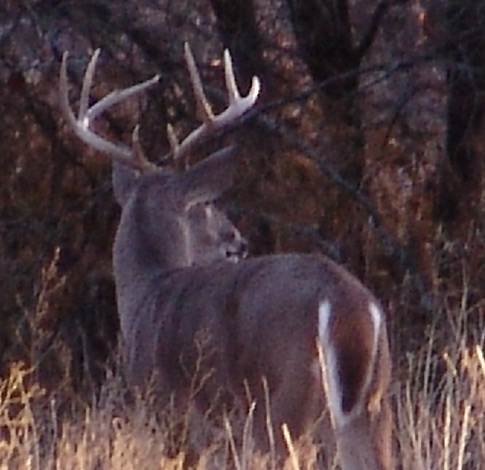 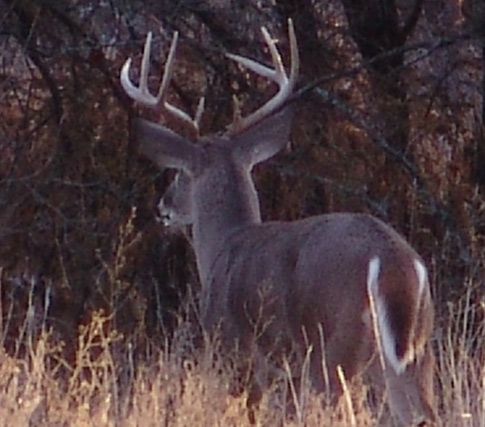 Big Boy stopped. I hadn’t noticed the noises as the neighboring rancher did something on the road that runs by my house. I don’t know if that bothered Big Boy, or if it was because there weren’t any does, or he wasn’t interested in the food plot; but he casually turned and walked a ways to a group of trees 80 yards away, where he worked a scrape. I got this picture then. 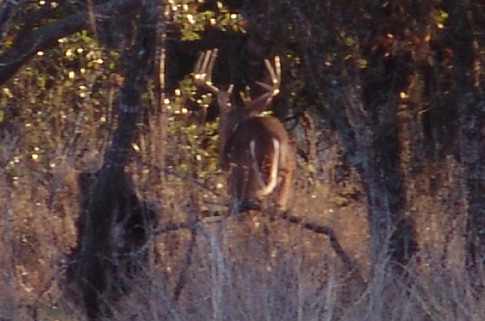 The other bucks came over to him and they gradually went to the 120 area. 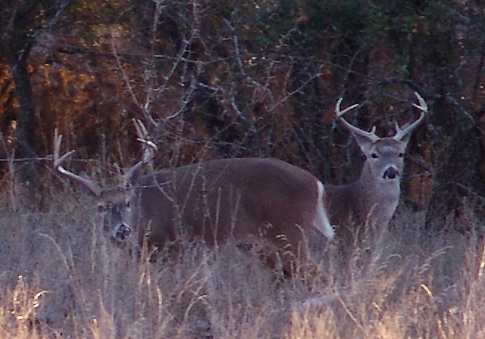 I waited two more hours. I saw activity in the trees to the north but nothing more came where I was.

My buddy Roibie Cramer came down to hunt and we ate lunch at Storms Hamburgers in Hamilton. Then we hit the deer woods. Nothing moved where I was until the sun was low in the sky. I spotted an 8-point surveying the area. 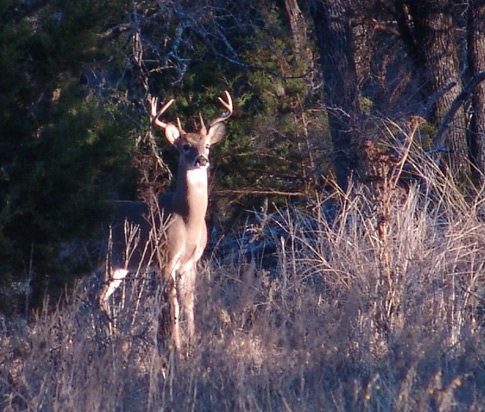 Then, along the edge of the woods by the gully I saw another buck walking. 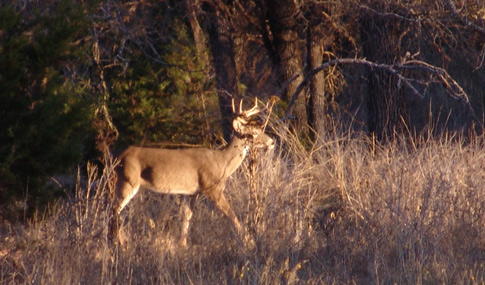 Some does came out of the gully and a different buck popped out and walked in my direction. 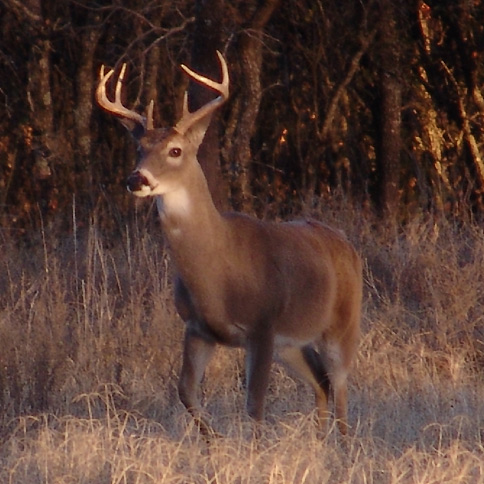 The buck stopped 30 yards from my blind and turned around. When he saw two does along the edge of the woods he hurried in their direction. 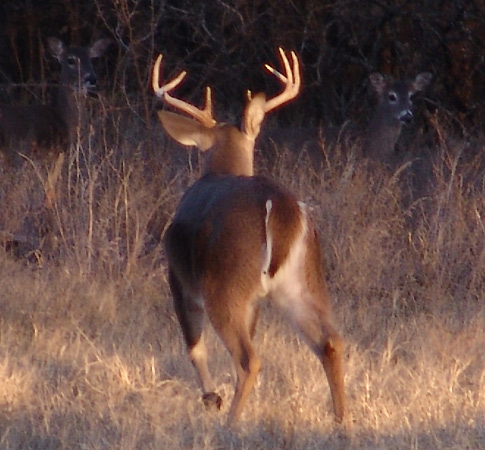 A button buck got between the buck and the does. The buck went around the button head. 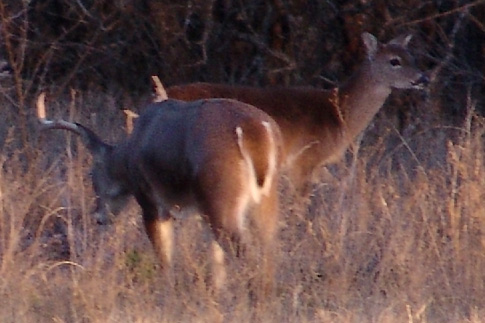 The buck moved on the does and then followed them along the gully and over the hill. 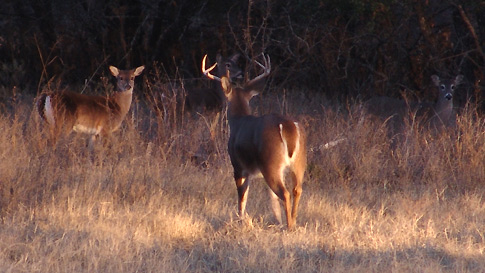 Sunlight began to fade and several deer were in the general area. Another buck came off the hill walking with a doe. They came to the deer perfume area and I got a picture of them. 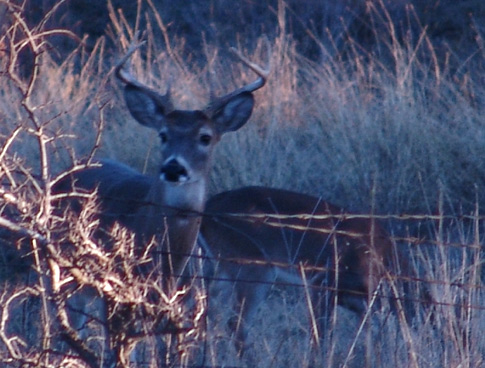 The buck and doe walked into the food plot when daylight was almost gone. I had to wait a half hour before I was certain all the deer were gone.

Lets see, there is one more day of season left. I have to pack my stuff and leave tomorrow night for Indianapolis and the ATA Archery Trade Show. It will really run things tight if I hunt too.

So the most prudent thing to do is not hunt and get started early. Hmmm, to heck with it, I’m hunting, at least in the morning.