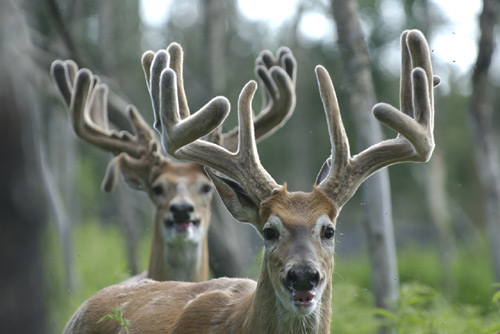 A whitetail is the master of smell. The only thing they can't smell is nothing. The only way to get to "nothing" is to address the entire scent issue with the "System."

The buck circled my stand and was soon directly down wind. To my advantage the rising morning thermals were just giving way to the daily prevailing wind. He stood next to the wrist size yellow leafed poplar and lifted his nose up toward the sky. He was employing the best nose in the business to detect the source of the antler clatter. He thought that there should be the smell of an estrus doe in the wind as most battles occur over hot does. That nose can detect up to six different smells simultaneously and he only needed the tiniest whiff of confirmation to tell him all he was asking, but the wind carried no odors, not even mine from my stand just 30 yards away. This was the buck I had been targeting.

We hunters are often targeted too. As a matter of fact we seem to have a laser dot dancing on our foreheads when it comes to national marketing campaigns. Who didn’t fall for the carbon clothing scam? Everyone I know did, including me. But what about the science behind scent suppression that is not carbon based. How about the liquid stuff I see every hunter spraying on himself behind his pick-up truck on every TV hunting show. This spraying is done as if it really solves a significant problem. But does it solve anything? The short answer is no!

Whitetails will choose what works and what doesn’t and that is all based on science and not on marketing. The first layer of defense must be clothing (camo) that does not carry a smelly detergent residue. The detergent you choose to use on your camo can actually be your first big mistake or you’re first line of defense. All hunting detergents except for one is made with a hooked (sticky) carbon chain of molecules. These detergents actually attach themselves to the fibers in your camo and stay there. Clemson University washed cloth samples in a variety of “Hunting detergents” and found that the cloth samples gained weight with every washing. The detergent (soap scum) was actually “candling up” on the fibers.

It wasn’t surprising as we had earlier contracted the Clemson University textile research department to conduct testing on a variety of detergents used by hunters and found that they all accumulated as a persistent soap scum on the fibers. That soap scum smells and of course it gives a whitetail another way to detect you. Clemson also tested Sport-Wash detergent and found that it alone washed completely out of the fibers of the test samples. This detergent is engineered with a unique straight carbon chain rather than a hooked chain like all others. It not only rinsed clean but when washed in Sport-Wash the other contaminated samples gave up their accumulation of soap scum and returned to their original weight. That is the story on the first layer of scent suppression, your camo. Now for the next layer of the strategy; your skin.

A deer can smell the human odor we put off. That odor is not mystical. We know its origin. It’s the result of human specific bacteria eating our skin cells. The by-product of their respiration is human odor. More specifically when your skin bacteria eat your skin cells the smell given off is uniquely you. That is how a tracking dog can track a specific criminal. The dog is actually following a trail of almost microscopic skin cells that fall off of our bodies daily. Those skin cells are laces with the bacteria I’m talking about. Not really magic but still awesome. The key here is that a deer’s nose is better than a dog’s schnozzle. You have to address this issue in step number two. Here is the plan.

The skin (epidermal) cells are shedding at an alarming rate. We lose (exfoliate) our entire epidermis and replace it every 28 days. The strategy to win this game involves scrubbing off the outermost and loosest skin cells with an abrasive glove. I get mine at Bath and Beyond or a Dollar Store. Yes, you’ll feel a little girly but this is the science. Scrub in the shower until you are a bit red. I scrub with a scent free soap that also washes completely off of my body and leaves no residue. It is called Sport-Wash Hair and Body Soap. This is step #2.

Finally we come to the step that most hunters fail at. It’s that spraying step. It’s not that spraying your clothes is not effective but is it necessary? The smell that alarms a deer is not camo pants or even camo jackets. Deer are not afraid of pants or jackets they are afraid of and avoid humans…especially bowhunters! The time to use the spray is in the shower after you turn off the water. And don’t use just any scent suppression spray but rely on one that is based in science. Most are a combination of baking soda and water. Cheap but not effective.

I use N-O-DOR Spray exclusively for a reason. This solution uses science and a process called oxidation to alter the organic waste of bacteria respiration to an inorganic stable compound that does not smell. It also includes a specific bactericide that is safe for human use but lethal to the bacteria.

The one thing you don’t want to do is add enzymes to your skin or camo clothes. Here is how enzymes work on bacteria. Bacteria consist of single cells with a nucleus and typically a tough cell wall. Inside the wall is the cell matter, which contains specific enzymes that help break down food (epidermal skin cells in this case). When you’re human specific bacteria collide with a food source (skin cells), the enzymes punctures the outer shell allowing the nucleus to enter the food source and devour it. An enzyme is the catalyst that allows the bacteria to function. Adding enzymes to the process may sound like a great plan but really you are amping up the process of digestion and adding to the human odor problem.

The last step, #3 involves spraying down your entire wet body after you turn off the shower. The N-O-DOR (no-odor) spray will attack the human specific bacteria on your skin and also oxidize the persistent smelly organic waste and cause it to be inert (stable) and odor free. Wait 60 seconds before toweling off and getting dressed for the hunt. I even brush my teeth with N-O-DOR spray. Your mouth is a cesspool of smelly bacteria.

That’s the 3 system strategy in a nut shell. #1-clean camo that is residue (soap scum) free, #2- a clean body that is residue free and #3 an aggressive treatment of the source of human odor; the human specific bacteria. Now you see why spraying down your pants and boots before addressing the real problem is a waste of effort.
That buck I’d been targeting eventually circled my tree without picking up my scent and I carefully called him into 32 yards and got him an ear tag. Real scent suppression involves understanding the System Strategy. Success is in the science.

See the System in Action by clicking on this PA bowhunt: The Buck System

Buy the Best Decoys on the Internet