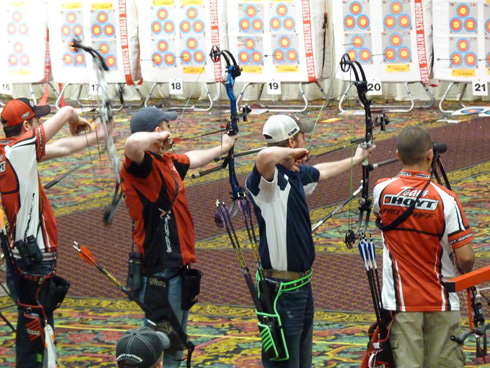 Over the weekend of February 11-13, some of the best archers in the world assembled in Las Vegas for the National Field Archery Association World Archery Festival, known more commonly as the “Vegas Shoot.” I didn’t get an exact head count but I believe there was between 1200-1500 registered participants. This is one of the really big shoots of the year and participants come from all over the world to win the large prize money. 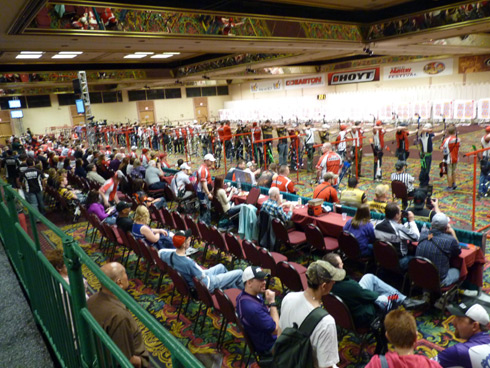 The Vegas Shoot is the first leg of the “3 Star Tour” the NFAA promotes each year. The total prize money exceeded $165,000 which really draws the best of the best to the shoot. I’m not sure how many countries were represented but there were archers from Europe, South America and Japan, to name a few.

The event consists of three rounds of shooting at the traditional 3-spot 20 yard target. There are numerous flights to allow for all levels of style and ability. You won’t see the typical backyard guys, like me, there; these archers are all good. How good? In three days of shooting a score of 900 is perfect. That means all arrows in the bull’s eye. After completing those rounds 15 men in the Compound Unlimited Male division had perfect scores. I said they were the best of the best and they are. In a shoot off Reo Wilde won the $25,000 top prize. Not bad pay for three days of doing what you love. Martin Damsbo from Denmark finished second and collected $5400 for his efforts.

In the women’s top flight, Compound Unlimited Female, Erika Anschutz from Ohio took home a $5000 check for her efforts. She and another woman had tied with a score of 898 after three rounds. You do the math, but that means only two arrows were out of the ten ring and they were nines.

In case you’re not familiar with the NFAA, it has been around since 1939 and has associations in all fifty states and over 1100 affiliated clubs. Their website states that “The NFAA is dedicated to the conservation and preservation of game and its natural habitat. The organization is very active in cooperating with federal and state agencies and sportsmen and conservation organizations. It is resolved to foster, perpetuate and preserve “the use of the bow in accordance with its ancient and honorable traditions.” 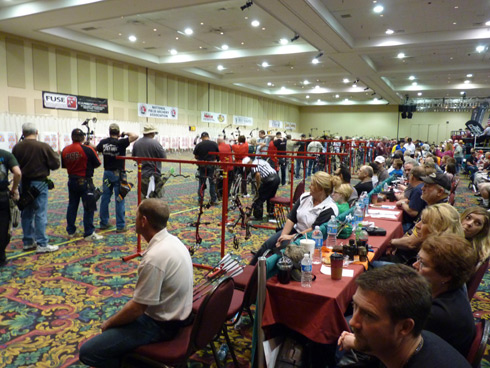 The Vegas Shoot had an exhibition area where many archery related companies show and sell the latest products. Most of the large bow manufacturers were there. I was able to visit with many old friends including the folks from Jim Fletcher Archery which has been a friend and advertiser on Bowhunting.Net for many years.

By the way, many of the shooters are also avid bowhunters. This event shows that archery is a diversified sport and there’s room for all of us. Not everyone has to be a hunter to love the sport.

If you get a chance go to one of their events, I think you will find it interesting. And if you’re a good shot, go for the gusto and register to shoot. Maybe you can pick up one of the big checks.

The Best Seed for Your Buck