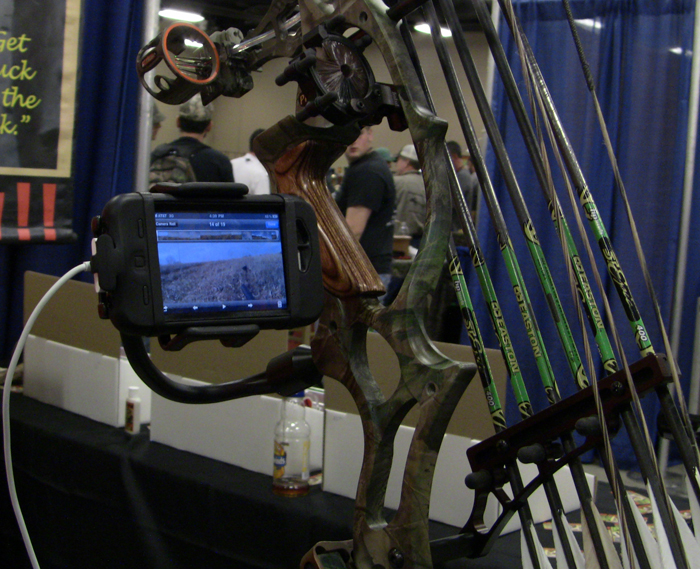 Here is the Flex Cam mounted on a bow with a iPhone attached.

This was my first time attending the National Wild Turkey Federation Show. I really didn’t know what to expect. I had heard a lot about the show from Robert Hoague and other industry friends but was blown away when I finally walked the floor for the first time.

One of the first products that I came across was the Flex Cam from a company called Smokin Rack Products. As we all know, capturing your hunt on video is very popular. The Flex Cam gives you the ability to hold your cell phone, flip video recorder and even small handy-cam in place on your bow or shotgun while you hunt. The Flex Cam is very light and easy to adjust also.

The next product I came across and I even tried, was a new energy shot called Strut & Rut. It is a great tasting shot that is perfect for those long days hunting, basically “ammo for your body” as Strut & Rut likes to say. I know with turkey season coming quick, I am stocking up on S & R to give myself and extra energy boost in those early mornings. Ken, the founder of Strut & Rut, also has another cool internet venture that you can check out at www.huntingh2h.com.

As we continued to walk, we next ran into a man by the name of Ken Stewart. Ken’s company Herd Guard has a few different products that are used while hunting. The main product that he showed us was Body Guard 360. This is a scent eliminator that works, he showed us right on the spot. Basically, he had us rub sliced onion on our thumb. The onion stench was strong as he then sprayed his product on the same thumb and had us shake the liquid off our thumb. Instantly the onion stench was totally gone, “to never come back” says Ken.

Not only do you see a lot of cool products at the NWTF Sport Show but you also meet a lot of great people. I met people who were helping at booths and I also met crazed hunters in the aisles.

One guy I stopped and talked to for a bit was Jon Melton from Handicap Outdoors. At first glance you will notice that Jon isn’t like everyone else, but after you talk to him for a bit you will find out he is in fact just like me and you – with an immense passion for hunting and the outdoors. Jon was in a serious car accident in 2007 but it hasn’t slowed him down one bit as he now hunts more than ever. Handicap Outdoors was created for people who have disabilities because Melton believes that just because you have an obstacle, it shouldn’t stop you from the things you love. I was truly inspired by Jon.

I also met a young lady by the name of Ashley Lauren at the Show. Ashley’s dad Doug is a Bowhunting.Net writer and longtime friend of Robert Hoague. Ashley not only has a great passion for the outdoors but for outdoor related art. Moultrie Feeders bought one of Ashley’s paintings called Stomping Grounds, to give away at the NWTF show. Anyone who came the the Moultrie booth could enter their name in for the drawing which was held on the last day of the show. I was not fortunate enough to win but I was able to talk with Ashley about her paintings and about some of her hunting experiences. She has a bright future in this industry and a great talent. Check out her website at www.TheAshleyLauren.com

I will have more coverage from the NWTF Show soon. There was so many great companies, products, and people in Nashville.