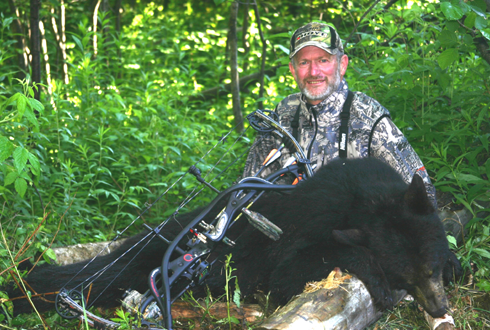 Treat black bears with the same respect as you do whitetails, and your success rate will soar. Robb shot this nice boar in 2010 in Quebec.

I know it is still winter in much of the country — what-the-heck happened to that global warming thing anyway?  But soon it will be time to get out and start chasing black bears. And for many bowhunters, hunting bears over bait is their technique of choice.

While many of you have done it before, many will be attempting it for the first time this year. And as sure as the sun rises in the east, unless Lady Luck smiles brightly on you, you will discover that killing a big boar over bait isn’t as easy as many would have you believe.

There are lots of reasons for this, but the number one reason big boars escape from bait hunters every year is that the hunters — and often, their guides — completely underestimate an old bear’s intelligence. If they live in areas where they are hunted much at all, big old boars will not tolerate any sloppiness on the part of hunters and guides alike. Treat them like you would a 5 ½-year old whitetail buck — an animal we all agree is as hard to catch as smoke on the wind — and you’ll be well on your way to getting a controlled shot at a dandy bear over bait.

Whether you go guided or set baits on your own, here are 15 tips to help your baiting success this spring.

1) Pick a Spot: Bear baiting is like buying a house — lots of things are important, none more so than location, location, location. Choosing a location for hunting is a process I call “shrink your focus.” You have to locate the bait in a specific spot in a specific area in which there are lots of bears. You can only learn where the best spots are by talking with people and doing a lot of scouting. Sometimes it takes several years hunting the same area to learn where the sweet spots are. It’s time well spent.

2) Water is Key: I have never set up, nor have I ever hunted over, bait successfully for big bears that was not in close proximity to water. It might be a small creek or big river, small pond or large lake, but bears love water. Hunt there.

3) Setting a Stand: I set all my baits for bow shots, setting the tree stand 20-30 yards from the bait. Closer is too close for fidgety bears, further makes the shot iffy. I try and set tree stands at least 20 feet high, to make it easier for me to see down into the thick cover and get my scent as high as possible. Tree stands should be set in trees that afford lots of background cover, like evergreens, or clusters of other trees to help hide your outline from the often-underrated eyes of a bear. And it should go without saying that the stand should be set downwind of the bait itself.

4) Access/Egress: Big bears live in a world of scent, just as big whitetails do. Thus I choose my stand locations so that I can both access and egress them without leaving my own scent along the trail most likely used by the bears when they approach the bait. I also always spray my clothing and boots down with Scent Killer to eliminate any telltale human odor I might be tracking in and around the bait site.

5) Pavlov’s Dog: Spring bait hunting means one thing — biting insects, and lots of them! When I was baiting in Alaska I learned that I could hang a rag soaked with my favorite bug dope at my bait site, and the bears would soon associate the smell of the repellent with food. This really helps! But if you really want to put the hex on biting bugs and keep them off you get a ThermaCELL unit. Bottom line, ThermaCELL works.

6) Opening the Bait: A new bait site must be “opened,” meaning you want to put out massive quantities of scent to draw in bears from long distances. I’ve done this several ways. One is to burn honey and bacon on a camp stove right at the barrel, sending plumes of greasy smoke into the air. Using a commercial attractant — I have used Wildlife Research Center’s Ultimate Bear Lure for years — on a rag works, too. Another was to drill a lot of small holes into a three-foot section of six-inch diameter PVC pipe, fill it with a smelly attractant (in Alaska I used herring, for example), and hang it high over the barrel. And I always took in five gallon jugs of old fryer grease obtained from a fast-food restaurant, which I’d dump all over the ground.

7) Funnel ‘em: When setting up the bait itself, try and position it so any bears that decide to feed there will offer a broadside or slightly quartering-away shot. You can do this by erecting barriers of brush, logs, boulders and the like that force the bears in and out this way. The funnel should also force the bear to move upwind of your stand, and keep his head pointed away from you.

8) Bait with Sweets: Bears love sweets. I have spent many a before-dawn morning dumpster-diving behind grocery stores to retrieve discarded pastries and doughnuts, which bears love even more than I do (an amazing thing!) I also bait with kibbled dog food covered with large quantities of chocolate or maple pancake syrup. They gobble it up! Bears also love peanut butter, if you can get it, as well as jams and jellies. A friend uses a mixture of grain, brown sugar, and water, which he mixes in a barrel and allows to ferment a little. Bears are not teetotalers, I assure you!

9) Bait with Meat: In some areas bears love meat. Old beaver carcasses, for example, are prime baits in many parts of Canada. One of my problems with meat baits in Alaska was the fact that it sometimes drew in grizzlies, which meant I had to close the bait down. Where there are no grizzlies, I like using meat in conjunction with dog food and pastries.

10) Artificial Baits: If you are short of food baits — and even if you are not — I have begun using some artificial baits in recent years. For example, in 2009 and 2010 trips to Quebec I brought along both Wildlife Research Center’s Ultimate Bear Lure and Code Blue product’s Code Blue Bear Magnet and a Bear Magnet Drip Bag. All have a strong anise aroma — a great complement to the meat baits. And there are sex attractant scents that also work quite well at times in spring, when bears are in rut. Good stuff all.

11) Scent Control: I treat stand hunting for black bears just as I do whitetail hunting — and that means following a meticulous scent-control program. That means washing clothes in unscented detergent, showering with unscented soap and shampoo before every trip to a stand, using unscented deodorant, and liberally spraying down with a liquid scent-eliminating spray before every stand shift.

12) Use Trail Cameras: Nearly 20 years ago I began using the first trail timers at my bait sites. These electronic devices simply recorded as a number anything that walked past their beam. When one of my timers showed a hundred hits in a couple of days I knew bears were there, and I’d have to go sit the stand to see what was what. Today, of course, we have infrared trail cameras that show us digital pictures and tell us when the animals are there. You should have one set up at every one of your bait sites. I haven’t used one yet but man, I’m hearing lots of good things about Spypoint Cameras. They rule in Canada and have come into the US like gangbusters with quality systems and a variety of units. Certainly worth a look – Spypoint Trail Cameras

13) Feed ‘em Regularly: One thing about bear baiting — it takes massive quantities of bait to keep the bears fed. Once they start hitting your baits they’ll eat everything in sight — but once the food runs out, they’ll leave. That means you have to regularly check your baits and keep the bears fed, or you’ll lose them.

14) Patience & Persistence: Bait hunting often means spending long hours on stand while being kept company only by squirrels, birds, mosquitoes, and your paperback novel. When running my own baits, if there is nothing going on at one bait I move on, letting my trail cameras tell me where and when to be there. Amazingly, while conventional wisdom tells us that the very best bait hunting occurs in the evening, I have used trail camera data to kill bears at all hours, from sunrise to lunchtime. The key is to never, ever give up.

15) Be Selective: You’ve been hunting a good bait for days and all you have seen are lone sows, small boars, and maybe a sow with a cub or two. Don’t get frustrated and shoot the wrong bear. One of the reasons bear baiting is permitted in so many places is that hunters can be selective in their harvest, taking only mature boars and leaving the sows for seed and young boars to grow up.