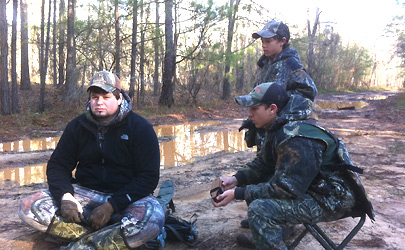 Sebastien and I alternated calling every couple hundred yards. We walked the first road to the end and took a left and walked that one to the next road.

Four hours into our walking and calling we had heard only a distant solo gobbler. I got out the ThermaCELL and we stopped for a rest.

Fort Benning has Airborne training and we saw some of it on our hunt and walk. At first noticed a fat airplane flying low in the sky. Troy said he thought there was a good chance we would see a jump. Sure enough, soldiers starting their drops from the plane, Collin caught it all on video. 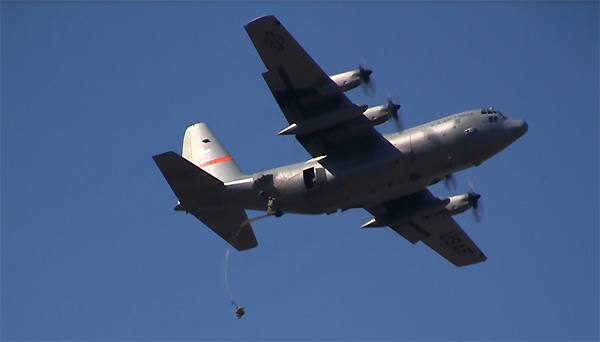 It was very cool watching the soldiers making their jumps from the plane. On our walk we had seen some occasional turkey tracks. On one of the last roads we found an  area where quite a few gobblers and hens had crossed the road. So we stopped and called several times and saw a hen cross the road up ahead of us.

When we returned to our vehicles it was after 2:00 in the afternoon. Troy, as well as Collin and I had work, to do the rest of the day and we made plans to meet tomorrow morning.