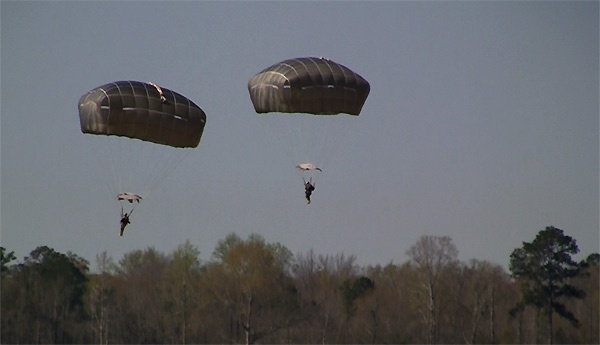 Collin and I met Troy Simpson near the place we hunted the first morning and made plans for the morning hunt. We went down the road by the finger of water and set up and Troy and his two sons went somewhere new. It was a very nice morning in the Alabama turkey woods but Collin and I did not see anything.

However, that was not the case with Troy and sons. They heard gobbles from a roost that was very close to where they were set up. Some hens were in the mix and the guys saw two longbeards fly down and go to the hens.  The group walked around in the woods and eventually left the area. When we met up Troy said he would show us where to go to to hopefully meet up with the gobblers.

Earlier, Troy had asked if we wanted to see the paratroopers close up and of course we said yes. So we all got in Troy’s pickup and drove to the Drop Off place. While we were parking a plane came through the air space several paratroupers. We saw several more drops.

Here is a pic as they get closer to the ground.

Next we ate lunch at the base PX and then went to Troy’s job. He showed us some training simulators. It was amazing. They were video projections of military situations. Depending on choices made by the trainee different results could happen. Everything was life size too and it was very realistic I can see how it is very helpful.

Afterward we returned to my truck and Troy showed us how to get where we would be hunting this afternoon. Today is our last hunt in Alabama and Collin and I both wanted to hook up with some gobblers this afternoon.